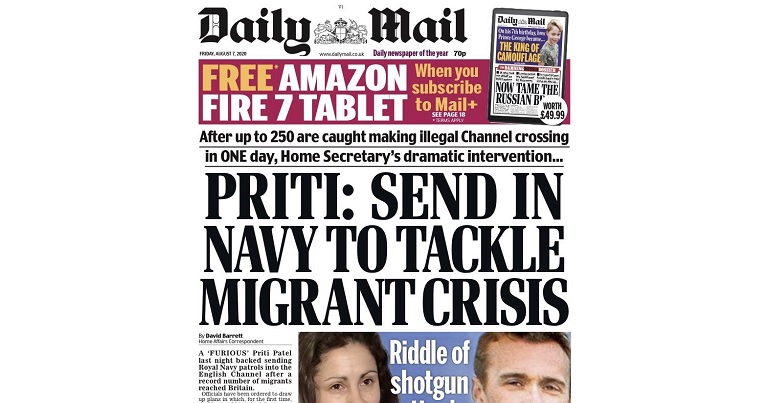 The corporate press’s response to refugees crossing the English channel shows that little has changed in five years. That is right-wing politicians and tabloids continue to roll out the ‘migrant invasion’ narrative for their own purposes; ignoring the fact that many of these people are refugees and asylum seekers – and the part the UK has played in putting them in that position in the first place.

Let’s deal with the facts

BBC News reported that on Thursday 6 August, a record number of people came across the channel from France, with almost 4,000 making the journey so far this year. Thursday’s total was 235. But as the BBC said:

There were also 49,000 asylum applications.

As such, the 4,000 unauthorised Channel arrivals are equal to less than 1% of all immigrants last year.

And as it also noted, the number of UK asylum seekers is much lower than in European countries:

The number of asylum seekers arriving and applying to stay in other European nations is far, far higher than in the UK. Last year, some 165,600 sought asylum in Germany, 129,000 in France and 118,000 in Spain.

But if you were to believe the right-wing corporate press and alleged ‘politicians’ like Nigel Farage, you’d think there was an “invasion” happening (the Brexit Party leader’s words). A former Guardian journalist summed up the situation best. As he tweeted:

-55,000 dead in Pandemic
-Economy shredded
-Unemployment about to soar

Yes, the right-wing front pages for the past few days have been dominated by the refugee situation. Of course, most of the commentary failed to acknowledge the obvious: that many people seeking refuge in the UK were coming from countries in chaos; chaos that our country has had a hand in.

As BBC News asked and then answered:

Where do the Channel migrants come from ?

In short, the poorest and most chaotic parts of the world. Recent arrivals have included entire families from Yemen, Eritrea, Chad, Egypt, Sudan and Iraq.

The UK has been involved in:

Meanwhile, little needs to be said about Iraq. Moreover, the BBC fails to even mention Syria – where Russian, US, and UK-aggravated chaos has forced over six million people to flee the country. The UK quite happily ruins other countries. But then it doesn’t want to deal with the consequences.

But writer Musa Okwonga also showed the other problem with the current media frenzy over the ‘illegal’ ‘migrants’. Because it’s nothing new:

The Sun described human beings like this as cockroaches while hundreds of them were drowning in the Mediterranean, and their managing editor at the time went on to claim three of the best jobs in UK media.

Yet in a bizarre twist of irony, the Express screamed on 8 August that:

The tabloid rag, in amplifying Tory minister Nick Gibb, seemed to have forgotten its own front pages from 2016. Either that, or it was lying in the run-up to the EU referendum. Because wasn’t the UK’s ‘migrant’ ‘problem’ the EU’s fault?

So much for ‘taking back control of our borders’ – hey, Farage?

The current right-wing propaganda about refugees and migrants follows the same, well-worn pattern as it always has. In times of national crisis, or where certain politicians have agendas of their own, the corporate media dutifully play the ‘migrant’ card to keep much of the public’s anger aimed elsewhere. It’s no different now to how it was in the run-up to the EU referendum. And the right-wing tabloids sadly seem to still be getting away with it.