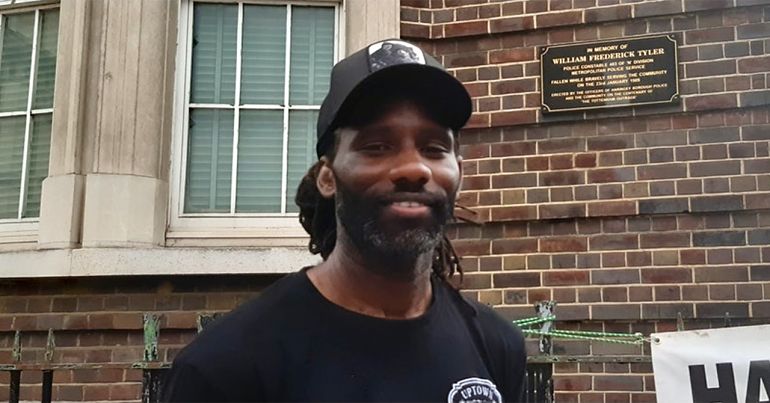 CORRECTION: This article originally had a featured image of Winston Silcott. The image was chosen by PA and reflected the inclusion of a mention of Silcott in an earlier edition of the article. However, there was no reference to Silcott in the edition we published and therefore the headline gave the misleading impression that the person in the image was Wretch 32. The article was updated at 1.50pm on 10 August to include a featured image of Wretch 32.

Rapper Wretch 32, whose father was Tasered by police officers, has said that Black people are “over-policed and under-protected”.

The musician was speaking as he stood next to his father Millard Scott, at a demonstration outside Tottenham Police Station, north London. The protest was held on the ninth anniversary of Mark Duggan’s death. Duggan was fatally shot by police officers.

Watched by uniformed officers, hundreds of people turned up in the scorching temperatures at the police station to support the musician and to peacefully protest against racism in the police force and violence in Britain.

Wretch 32, whose real name is Jermaine Scott, had previously posted a video on Twitter of his father Millard Scott falling downstairs after being Tasered by officers.

He told the crowd: “I am saddened that we have to be standing here today.

“I feel that as a community, as a people, that we are over-policed and under-protected.

He said people have “no trust in the system” and it is a struggle with the police which the community faced since he was a child.

Then, putting an arm around his father, he said: “My dad stands here today. In my eyes he is lucky to be alive.”

Wretch 32 posted footage online in June which showed his father tumbling downstairs at his north London home after an officer was heard to warn: “Police officer with a Taser. Stay where you are.”

Scotland Yard said officers had gone to the address in Tottenham on April 21 as part of an operation to tackle a drugs supply linked to serious violence in Haringey.

Wretch 32 added: “I will use my platform if it kills me and I think all of us here have a duty to fight.”

The crowd called for officers to stop the overpolicing of Black communities, along with the use of excessive force, tasers, stop and search and the disproportionate use of handcuffing during arrest.

A long list of the names of some people – both Black and white and stretching back to the 1980s – who have died after coming into contact with the police was pinned to a barrier outside the station.

Many bereaved relatives had supported the demonstration but were now too old to come out to the streets to protest, organisers said.

Messages which read “the Met Police must cease and desist” along with “defund the police, invest in our lives” were pinned to a door at the police station.

Mina Agyepong, 42, told the crowd that her 12-year-old son Kai “is traumatised and he is angry” after armed officers raided her north London home late at night in July to arrest him.

He had been playing with a toy gun.

Suspicions had been raised by a passer-by who said they saw a Black male holding a firearm on the sofa.

She said: “I worry now what his relationship is going to be with the police – that sense of distrust. Stop criminalising our children.”

Cynthia Jarrett died of heart failure after four policemen burst into her home during a raid on5 October 1985.

Her son Patrick fought back tears as he said: “I get emotional when I think about my mother because I love her.

“We have all got to stick together and keep on marching. We have got to keep on protesting because this is for all of our kids and our future. They can tear down your family from top to bottom.”