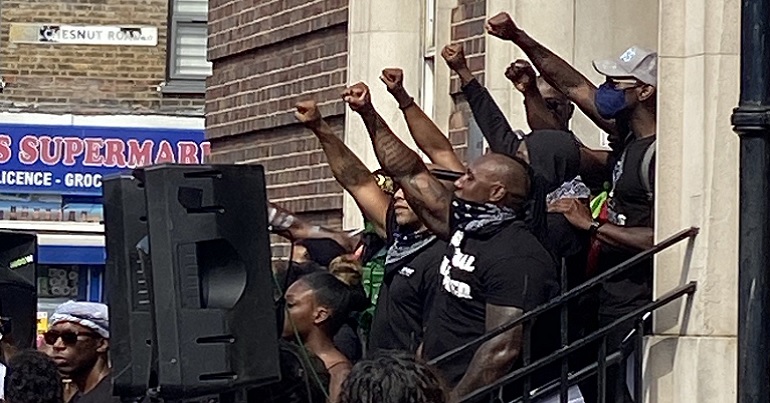 CORRECTION: This article was updated on 10 August to clarify that whilst many believe Mark Duggan was murdered by the police, it was found to be a lawful killing and we have therefore corrected this piece accordingly.

This week has marked not only the anniversary of the fatal police shooting of Mark Duggan, but also the ensuing protests that followed in 2011 – labelled by politicians and the media as “riots“. A demo outside a police station in London symbolically remembered the events, and also highlighted ongoing issues with institutional racism and classism. But another situation involving police in the capital shows that despite government pledges, the same problems still exist.

A demo in Tottenham

Black Lives Matter UK and other campaign and community groups organised a protest at Tottenham police station on Saturday 8 August. It was hinged around the anniversary of Duggan’s death (4 August), but also the 2011 protests sparked by his death. Director of campaign group Inquest Deborah Coles said the protest aimed to highlight the:

systemic issue of racist policing and its impact from routine harassment, surveillance, stop & search, use of tasers, to deaths & injuries after use of force.

As The Canary reported, grime artist Wretch 32 came to support the demo. His father, also present, had recently experienced police brutality – falling down a flight of stairs after being Tasered. Wretch 32 said:

I am saddened that we have to be standing here today.

I feel that as a community, as a people, that we are over-policed and under-protected.

Dozens of people turned out and listened to speakers, as well as calling for change:

Mina Agyepong, whose 12-year-old son Kai was arrested and handcuffed by police after he was seen playing with a toy gun, spoke at the event. She said that Kai is now “angry” and “traumatised”, and:

I worry now what his relationship is going to be with the police – that sense of distrust. Stop criminalising our children.

The demo was completely peaceful. Campaign group StopWatch UK said that the policing at the protest was “conciliatory and respectful; exactly what was needed”. This stands in stark contrast to what happened in 2011. As The Canary previously reported, at the time police refused not only to engage with Duggan’s family but also demonstrators. This, Duggan’s death, and their heavy-handed approach sparked the nation-wide protests that followed.

Sadly, a few miles away in north west London, it was a different story. Because the Tottenham demo came just hours after police targeted a community youth project, involved in the protest, in Colindale, Barnet. And it shows that nine years after Duggan’s death, not much has changed.

The Guardian reported that the situation centred around the community group The 4Front Project, which co-organised the Tottenham demo. Its director Temi Mwale told the Guardian:

the incident had begun when young people from the estate had come to the 4Front Project’s offices to tell her colleagues that a 14-year-old was being arrested.

She and colleagues had challenged officers, who told them they had smelled cannabis on the boy and found drugs nearby. Onlookers were not satisfied with the their responses given and sat down in the road to block their vehicle from leaving the area.

‘Here we have enormous issues with strip searches,’ Mwale said. ‘We have had young people with their trousers down on the main road … this is why we said we don’t really trust what you are doing today.’ She alleged that the boy who had been arrested had previously been the victim of an illegal search, in which police officers had put their hands in his underpants.

Mwale said she tried to de-escalate the situation, but many more officers arrived. ‘They started grabbing people, dragging them across the floor. One person had 10 or 15 officers around him, they were pinning him down with their knee on his neck.’

4Front Project workers were among those attacked by police, Mwale said. ‘The young people have got trust in these workers, they have been with them in the police station as appropriate adults,’ she said. ‘From that point the young people were saying: no, you are not taking them.’

Police initially arrested four people, who were later released under investigation. The 4Front Project released a video of what it called the “original circumstances” surrounding the police action. You can scroll right in the Insta post for further footage:

THESE ARE THE ORIGINAL CIRCUMSTANCES WHICH LED TO THE PEACEFUL PROTEST OUTSIDE COLINDALE POLICE STATION YESTERDAY! POLICE INFLICTING VIOLENCE & HARM ON OUR COMMUNITY WORKERS & YOUNG PEOPLE. @4FRONTPROJECT WILL BE RELEASING A FULL STATEMENT AS SOON AS WE CAN. FOR NOW WE DEMAND AN IMMEDIATE END TO THE OVER-POLICING OF OUR COMMUNITY. THANK YOU FOR ALL YOUR SUPPORT. #THE4FRONTPROJECT #ATTHE4FRONT

At best, this appears to be another example of police racial profiling, classism, and excessive use of force; something which has an institutionalised history in the UK.

Duggan – and countless others

Police shot Duggan in 2011. As The Canary‘s Emily Apple previously reported, the background to the case was stained by institutional racism and classism across the police and media:

Duggan was shot and killed in August 2011. Despite police claiming he had a gun in a sock, the inquest into his death found he was unarmed at the time he was killed. Like Baker, he was smeared in the press as a gangster, this was aided by police officers, one of whom testified at his inquest that he was “among Europe’s most violent criminals”. However, no evidence was given to back up this claim, and Duggan only had two convictions for minor offences. Furthermore, an image of Duggan grieving at his daughter’s funeral was deliberately cropped to accompany gang related articles.

Despite being unarmed, the inquest jury still ruled it was a lawful killing. Speaking outside the court, his aunt, Carole Duggan, stated:

‘The majority of people in this country know that Mark was executed. We’re going to fight until we have no breath in our body for justice for Mark, for his children’.

But Duggan was not the only person of colour police have killed over the years.

Since 1990, 184 people of colour have either died in police custody or through contact with them. As Inquest noted:

14% of deaths in police custody or otherwise following contact with the police since 1990 were black, Asian and minority ethnic people (BAME). This is proportionate to the population as at the 2011 census.

But as it also found:

Of the 74 people fatally shot by police since 1990, 20 of those people have been BAME, meaning those communities are proportionately twice as likely to be shot dead by an officer.

As the UN stated, this is “structural racism”. Yet despite government lip-service over the years, little has actually changed.

The juxtaposing of the Tottenham demo with events in Colindale show that in the Met, and the police more broadly, the structural problems that existed in 2011 are still there – and have been for decades. The police killing of George Floyd in the US has galvanised the anti-racism and ‘defund the police‘ movements. But when institutionalised racism and classism comes directly from governments and corporations, more may well need to be done before we achieve true equality and justice.