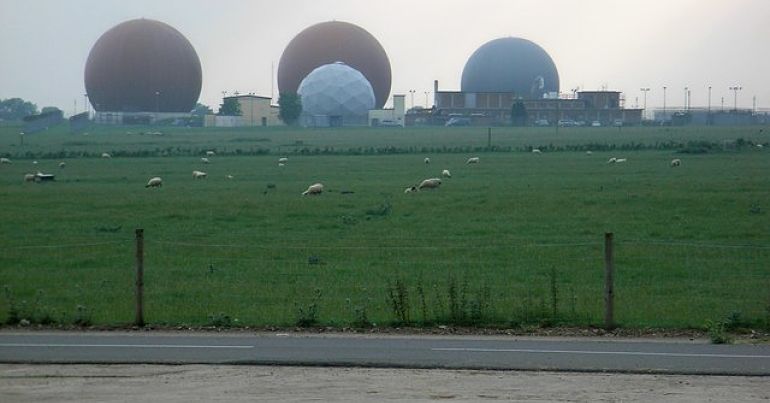 The UK request for the extradition of US citizen Anne Sacoolas on criminal charges following the death of teenager Harry Dunn, appears to be getting nowhere. Dunn was riding a motorcycle not far from the military base in Northamptonshire where Sacoolas’s US husband Jonathan was stationed. Both Anne and Jonathan Sacoolas are reported to have worked for the CIA. Anne Sacoolas has been charged with causing death by dangerous driving after allegedly hitting Dunn whilst on the wrong side of the road. Sacoolas fled to the US and claimed diplomatic immunity.

The military base where Jonathan and Anne Sacoolas were stationed is described as an RAF base. But ‘RAF Croughton’ is populated by over a thousand US personnel. It’s probably one of the most important US intelligence-gathering centres outside of the US.

But not everything for the base has seemingly gone to plan given reports that a proposed expansion that would have seen it accommodate an extra 1,200 personnel has been reversed.

Alan Turnbull has conducted extensive research into Croughton and other US bases in the UK. He claims Croughton is the “focal point for the US military’s communications within Europe” and includes “two high security SIGINT [signals intelligence] enclaves”.

Over one thousand US personnel are stationed at Croughton. Based there is the 422nd Air Base Group, which is overseen by the 501st Combat Support Wing:

According to investigative journalist Duncan Campbell, the role of the 422nd Air Base Group includes “processing at least a quarter of all US military communications in Europe”. More specifically the group provides communications support for:

US Central Command (CENTCOM, covering the Middle East and Egypt);

the US Department of State and other US government agencies.

Campbell also noted that US Special Collection Service (SCS) documents were leaked by whistleblower Edward Snowden. The SCS is a “joint NSA/CIA unit that targets foreign countries, friendly and hostile, for snooping purposes”. 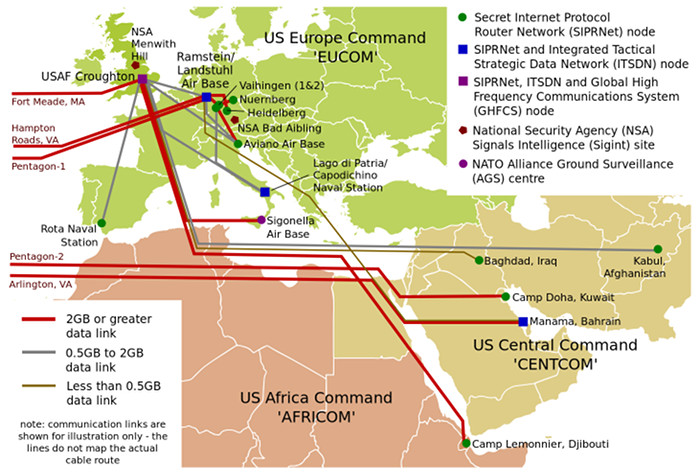 Vast quantities of information captured by America’s “Stateroom” system of listening stations in diplomatic missions – including phone calls and data sent over wi-fi links – are routed back to spy chiefs via a communications hub within the US Air Force base in Croughton.

He added that “The facility at RAF Croughton has been identified as a relay centre for CIA clandestine and agent communications” and that it has a direct link to GCHQ.

In 2014, a Peace News article stated that Croughton:

operates one of Europe’s largest military switchboards; processing approximately a third of all U.S. military communications between the USA and Europe and supports over twenty different communication and defence systems. The base is involved in intelligence-led warfare (Drones) and illegal surveillance and intelligence gathering on all citizens.

the base for more than a thousand American spies who play a key role in a huge and expanding US eavesdropping and intelligence-gathering network in Britain.

Expansion plans go ahead, but…

The Peace News article added that the base was destined to become “the largest intelligence hub outside the US”. It referred to how Reprieve had discovered that “a high speed fibre-optic data cable directly between US drone base Camp Lemonnier in Djibouti and ‘RAF’ Croughton” had been installed. The Djibouti base is the main centre for drone operations in the region, with attacks aimed at targets in Somalia and Yemen.

The planning application to South Northamptonshire Council for the expansion of the base at Coughton shows how:

a new windowless mission building “PL1” (Priority Level 1) and an antenna field comprising six new “golf ball” radomes, to provide the next generation of US DoD [Department of Defence] command and control data and voice lines to military operations, to be known collectively as the Joint Intelligence Analysis Complex (JIAC).

On 9 July 2020 junior minister Luke Hall confirmed that the plan to build new radomes at Croughton will proceed with a planning decision due on 12 August.

As Scott Lucas, professor of international politics at the University of Birmingham, stated to Declassified UK:

It took the killing of Harry Dunn to bring attention to a significant expansion of US intelligence capability, for collection and analysis at the bases at Croughton and Molesworth.

However, Norton-Taylor stated that JIAC will not now be moved to Croughton. Instead, it will remain at RAF Molesworth, to accompany NATO’s “Intelligence Fusion Centre”. Losing that complex will no doubt be a big blow to Croughton.

Meanwhile, the family of Harry Dunn still need justice. Just as the British people need to know far more about the Northamptonshire base that plays such a pivotal role in the killing of people in a very different part of the world.