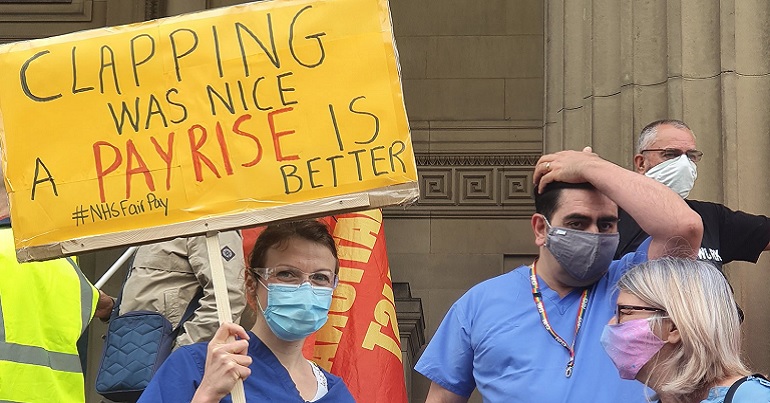 On Saturday 8 August, NHS workers and their supporters came out across the UK to march for a pay rise. But will their calls fall on deaf Tory ears?

Nurses United UK and other campaign groups organised a national day of action. They are calling for a 15% pay rise for NHS staff. As the event’s Facebook page noted:

We are calling on NHS staff and supporters to join us to send a clear message to the government. We do not accept your plans to exclude us from the public sector pay increase, and we will make ourselves heard until you listen.

The ‘exclusion’ of some workers from the public sector pay rise relates to a recent government announcement. In July, it said it would give doctors a 2.8% pay rise. In part, this is because they were excluded from previous wage increases. As the Guardian reported in 2018:

More than 1 million NHS workers in England are to receive a pay rise worth at least 6.5% over the next three years after the deal was accepted by 13 unions representing staff.

The rise comes after seven years of a 1% pay cap on salaries, which caused resentment among NHS workers.

Among those who will benefit are nurses, midwives, hospital porters, 999 call handlers, security guards, cleaners, radiographers and healthcare assistants.

Events around the country

NHS workers marched in places around the country to show their anger and frustration:

Solid respect to all as they show the way to get respect and decent pay. 👏❤️🌈✊ pic.twitter.com/kett9q8B3w

We are so proud to be supporting @pplsassembly #NHSWorkersSayNO protest today in #Cardiff What better cause for our @UniteWales young members banners first outing than supporting our #NHSHEROES #NHSPay15 pic.twitter.com/88LJKYbWJ6

There were events elsewhere, from Coventry, Norwich, and Bristol to Edinburgh, Cambridge, and of course London:

Laura, a second-year student nurse, perhaps summed it up best. She said in Liverpool:

We got through this pandemic; we’ve had unpaid placements; we’ve been doing jobs that… are worth being paid for. Student nurses are treated disgustingly. We have no funding, when we are doing, sometimes, three peoples’ jobs because there’s not enough staff on the wards. Why’s there not enough staff on the wards? Because we don’t bloody pay them what they deserve to be paid.

The power of the ballot box?

So far, the government doesn’t seem willing to budge on the issue. Given the number of NHS protests over the years, it remains to be seen whether the Tories will respond to this latest wave of demonstrations. But the public may well be a different matter.

Amid the coronavirus (Covid-19) pandemic, there was a visible surge in public support for the NHS. Not least among this was the ‘Clap for Carers’ weekly events; albeit those were “hijacked” by government. Given the tragic deaths of over 500 NHS workers due to coronavirus, the public may think it’s obscene that the government would exclude most NHS staff from its pay rise. Opinion polling matches this, with 69% of people thinking NHS workers should have a pay rise by the end of the year. So, the power of the ballot box may prove pivotal in the fight for fair NHS pay.