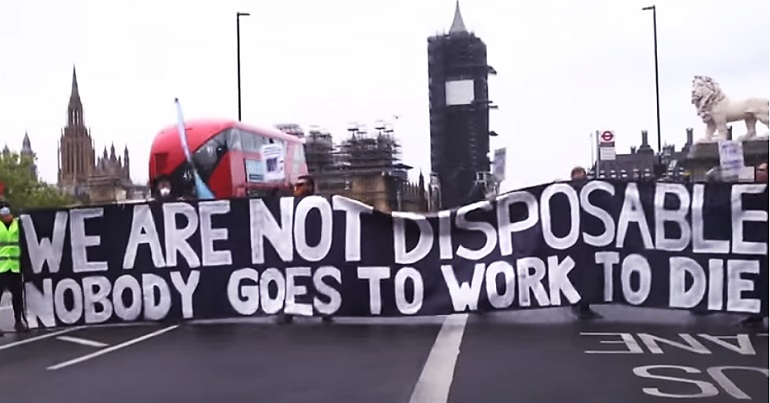 Nurses have taken matters into their own hands over the growing scandal about personal protective equipment (PPE). They blocked a major London bridge the night before International Workers’ Day. And their action also makes another important point; that the government’s own rules about key workers could, ironically, be used against them.

Going to work to die?

On Thursday 30 April, nursing staff from Guy’s and St Thomas’ hospitals in London staged a protest over the shortage of PPE. They began their protest outside St Thomas’ Hospital, and then made their way to Westminster Bridge. As ReelNews documented, they carried a large banner which said:

We are not disposable… Nobody goes to work to die

The nurses then blocked the road. And although traffic was obviously limited due to the lockdown, they still made their point; taking the message further by then hanging the banner off the bridge:

ReelNews spoke to several of the nurses. Faz, who works in intensive care, explained what the protest was about:

the government… told NHS staff they were safe to wear less protective aprons and basic surgical masks in all but the most high risk circumstances.

Now, it seems that this guidance was at best flawed. At worst, the government has put NHS staff’s lives at risk.

Back at the nurses’ protest, Mark Boothroyd is a union rep and staff nurse. He told ReelNews that he and his co-workers were also protesting over:

The Canary has documented the chaos surrounding coronavirus and PPE during the pandemic. Recently, as Emily Apple wrote:

On 28 April, [health secretary Matt] Hancock was asked to make a public apology to the son of a doctor who died from coronavirus two weeks after issuing a warning about the lack of PPE.

Hancock even supported a Daily Mail campaign which delivered PPE for the NHS. He clearly missed the scandalous fact that it takes a right-wing tabloid to sort an issue he should have been on top of. But none of this helps NHS staff in the here and now. As Jolanta, an intensive care nurse, told ReelNews:

Psychologically, it’s having a big impact on the ITU [intensive treatment unit] nurses, because we’re being… played off against the ward nurses. And ward nurses are being told that they have to save the [PPE] stocks for us… everyone should be deserved protection, and we shouldn’t be being played off against each other.

But the nurses’ protest also shows something else; that certain sections of society can still go out and demonstrate, even during lockdown.

Key workers, like staff from the NHS, supermarkets, and public transport, are allowed to deviate from many of the social distancing rules the rest of us are subject to. Conversely, these workers are the ones suffering some of the worst effects of the pandemic and the government’s chaotic and ill-judged management of it. So – there’s little stopping the thousands of key workers up and down the country taking to the streets in localised, ‘micro-protests’ about their grievances. Maybe, as well as clapping for our key workers, we could also spur them on with some direct action against the toxic government response to this crisis.

If you have a story related to this issue, check out our ‘Get involved’ section below:

Are you a group of key workers who are planning a small protest? Have you had one that you think people need to hear about? If you have a story related to this issue, The Canary would like to hear from you. The best way to get in touch is to email us via [email protected] . But you can also reach us on Twitter, Facebook, and Instagram. Or you can comment as a member on this article. And you can reach us via SMS at +447520649472 or WhatsApp at +441179111472. We’d be honoured to hear from you.