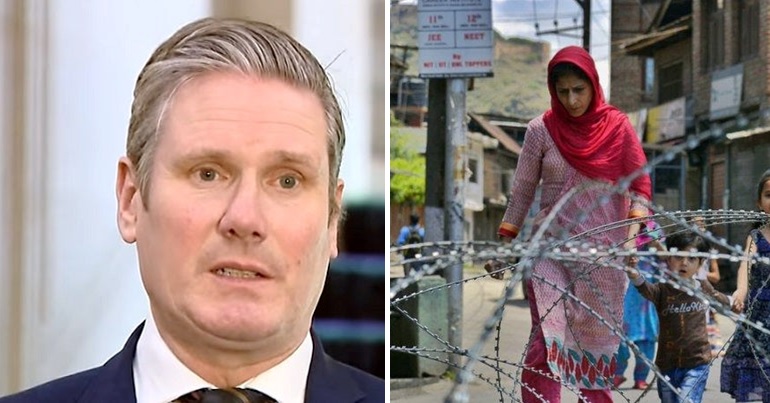 On 30 April, UK Labour leader Keir Starmer faced criticism for backtracking on the party’s previous commitment to Kashmiri people living under Indian occupation. This comes amid rising far-right nationalism in India, and the erosion of the country’s democratic values.

Many Labour supporters of Indian heritage were clearly disappointed with Starmer’s decision to cosy up to India’s nationalist regime. Tribune, meanwhile, wrote that:

By folding to a pressure campaign orchestrated by the far-right BJP government, Keir Starmer’s statement on Kashmir today not only betrayed Labour members – it abandoned a people living under brutal oppression.

The occupation of Kashmir

On 5 August 2019, the people of Muslim-majority Jammu and Kashmir awoke to find that their mobile phones were not working. Their streets were dotted with police and army personnel; a mass communications and internet blackout had taken place. The government of Indian prime minister Narendra Modi had made the highly controversial unilateral move to repeal Article 370 of India’s constitution, splitting the disputed territory of Jammu and Kashmir into two Union territories. Article 370 previously gave Indian-occupied Kashmir relative autonomy, allowing it to enact laws in all areas other than finance, defence, foreign affairs, and communications.

The same day that Article 370 was repealed, the Indian government placed Kashmir into a state of indefinite lockdown and mass-deployed troops. 4,000 Kashmiris were arrested, including some children; 200 politicians in the region were also arrested, including three former Chief-Ministers of the region; and hundreds of activists were arrested and detained without charge under the draconian Public Safety Act, which allows detentions of up to two years without charge.

Press freedom in Kashmir, long stifled by draconian laws, has been further muzzled in recent weeks. Independent Kashmiri photojournalist Masrat Zahra, and many others, are facing charges of “anti-national activities” under India’s Unlawful Activities (Prevention) Act. Zahra faces these charges for one simple reason: she took photographs that exhibited the agonies faced by Kashmiri men, women and children under the Indian government’s lockdown. She was kind enough to let me use one of her photos for this article. India’s increasingly authoritarian, far-right government will be using the photo as evidence against her with the aim of putting her behind bars for seven years.

India is facing an unprecedented rise in anti-Muslim lynchings and violence against minorities. And Islamophobic bigotry extends its arms into the modern Indian state. India’s chief minister of Uttar Pradesh, Yogi Adityanath, is a key example of this. In an undated video from 2014, he said that “if [Muslims] take one Hindu girl, we’ll take 100 Muslim girls. If they kill one Hindu, we’ll kill 100 Muslims.” He also stated in 2015 that he would (if given the chance) install Hindu idols in every Indian mosque.

The first portion of his hate speech in 2014 referred to “love jihad”, a concept he helped popularise in India which holds the belief that male Indian Muslims somehow secretively plot to seduce Hindu women with the aim of converting them to Islam. Conspiratorial claims such as these have no statistical backing but are widely considered among India’s political right and far right to be social norms. Adityanath has a history of contributing to communal tensions in Uttar Pradesh, with his followers once proclaiming their desire to exhume the graves of Muslim women and rape them at a mass rally.

As of April 2020, Subramanian Swamy – a member of Modi’s governing Hindu nationalist BJP – openly told VICE that he and his party see Muslims as “not in an equal category” to other Indian citizens under Article 14 of India’s constitution. The constitutional article right says that the “State shall not deny to any person equality before the law or the equal protection of the laws within the territory of India”. Once a professor at Harvard, Swamy’s courses were dropped by the internationally renowned university after he published articles suggesting that Muslim Indians should have their right to vote revoked while simultaneously calling for the demolition of Muslim houses of worship.

Swamy and Adityanath continue to prosper as public figures despite their politics of hate.

As February was reaching its end just this year, a pogrom took place in Delhi. It saw Muslim men and women murdered, elderly Muslims burned alive by Hindu nationalists, and it saw arson against mosques. Qurans were defiled and burned. Muslim shops, from bakeries to clothing stores, were looted by rioters. Delhi’s police faced accusations of conspiring with Hindu nationalist (Hindutva) groups. And Hindu and Muslim journalists alike were harassed or attacked for trying to report on the violence. Hindutva goons even climbed atop a Delhi mosque as they set it ablaze and rooted a flag of a Hindu god (Hanuman) into its spire as a mark of intimidation.

It is not just Muslims who suffer in India, though. Christian persecution in India is also extreme. Indian Christians, like Indian Muslims, are often victims of what is termed Ghar Wapsi (“home-coming”) attacks by Hindu nationalists; facing violence and sometimes death for not “returning” to Hinduism after being pressured to leave their faith. In 2008, Indian Christians were victims of one of the worst pogroms in India’s recent history. In response to a pre-planned attack by Hindu radicals, 55,000 Christians fled the Kandhamal district of the state of Odisha. 5,600 houses and 415 villages were set ablaze; over 90 people were killed, and two women were raped. Scores of people were injured and permanently maimed. Churches and social activists reported on the destruction of almost 300 churches, as well as convents, schools and welfare facilities. The victims never found justice, just as the victims in Delhi have found no justice.

The far-right Hindu nationalism at the heart of modern Indian politics represents a potentially fatal erosion of India’s democracy. It is the greatest threat to the fabric of the country’s freedoms – freedoms that are rapidly becoming more and more religiously and ethnically exclusive. And Keir Starmer should be ashamed of himself for cosying up to Modi and his anti-democratic regime.