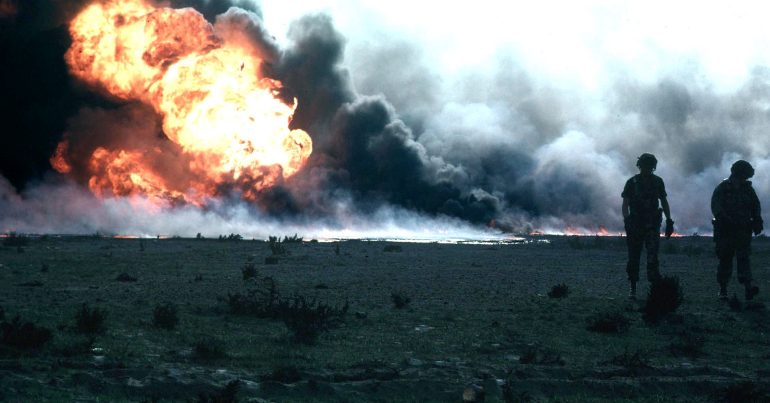 The coronavirus (Covid-19) pandemic has brought economies across the globe to a standstill. As The Canary has previously argued, this has forced both political leaders and the public to confront fundamental questions about how we live and how we organize society. Now, in an exclusive interview with The Canary, one of the world’s leading experts on natural resources, conflict, the global economy, and the climate crisis – Michael T. Klare – has spoken about the potential environmental implications of the pandemic, along with the effects it has had on the global energy trade.

First, what effect has the pandemic had on demand for oil and electricity? As Prof Klare noted, global usage has plummeted sharply on both counts, but particularly oil. He added that demand may never reach pre-coronavirus levels:

Klare then explained how coronavirus could hasten the emergence of what environmentalists call the ‘grand transition’ from the status quo to a more environmentally-friendly future. He said:

The grand transition is something that environmentalists and energy analysts have been talking about for a very long time, which is to say, a transition from carbon-based fuels – which are the fossil fuels, coal, oil, and natural gas – to renewable energy – wind, solar and so on. …

[What] the pandemic is going to do is accelerate that process much faster than before. Because I think that, as we adjust to the pandemic, we’re going to wind up relying less on petroleum and more on renewables. So that transition will speed up, and we may not have to wait 20, or 30, or 40 years for this to take place.

Unfortunately, however, Klare also noted that there would be some downsides to the fall in oil prices. In particular, he pointed to the probable future fate of ‘petro-states’ – i.e. countries that are largely dependent on oil production and exportation. He said:

I fear that it’s going to make the world a more unstable and violent place… because there are at least half a dozen [to] a dozen countries around the world whose governments depend on oil exports to finance their operations. We’re talking about Russia, Saudi Arabia, Iran, Iraq, Angola, Nigeria, Algeria, and Venezuela, among others. …

So there will be upheavals as a consequence.

He mentioned that this might have the corollary effect of helping the US government’s chances of achieving ‘regime change’ against countries such as Venezuela and Iran, as well as worsening the situation for the civilian populations on the ground. He said:

[In terms of] Venezuela and getting rid of [President Nicolás] Maduro, yes, it probably will hasten that process. …

Iran’s oil exports have already plummeted because of the sanctions imposed by the US. …

Many world leaders believe on humanitarian grounds, considering that Iran is suffering so much from the Covid pandemic, that the US and the world community should ease up on sanctions. But… the Trump administration, the ‘Pompeo regime’, wants to squeeze Iran even more, and I think that’s more likely to happen.

A warning from Mother Nature

Asked about whether the current pandemic could be a manifestation of humanity’s mistreatment of the environment, meanwhile, Klare said:

climate change is increasing the risk of pandemics in a variety of ways. And I do believe that a Covid-19 [pandemic] could have a climate change dimension to it. …

And what I’m saying here is that Mother Nature is telling us that there are limits to how much we can alter the climate, the planetary ecosphere, without suffering feedback loops, backlash, that are going to hurt us. It’s not that Mother Nature is… consciously doing that, but when you alter the chemistry of the planet in ways that alter life systems, we’re going to pay a price. And this is an indication, I think, of what that might look like.

He agreed that the problem is not merely one of management but also goes deeper into the worldview that underpins Western economic systems. He said:

the Western mode of thought, the capitalist mode of thought, which many evangelical Christians also share, is that the Earth was given to us to exploit in any way we wish, that humans are the master of the planet, and we could use our ingenuity to our benefit to exploit its riches and abuse in any way we thought, without paying a price for that. And Mother Nature is telling us, I believe, that that’s not the case; that there are limits to what humans can do to the planet. And when we abuse those limits, when we transgress, there will be punishment, [and] prices to pay.

A plan for ‘peaceful coexistence’ with nature

For Klare, the solution is for humanity to develop a new model for its relationship with nature. Rather than one that is based on dominance and endless exploitation, Klare argues that we instead need to transition to what he terms ‘peaceful coexistence’ with nature. He stated:

I call it a strategy of peaceful coexistence, that we agree, [us] humans, not to further abuse the planet in the hope that we can avert the worst of the backlash that we might expect. …

It’s all going to come back to carbon emissions, we have to bring those to zero. You know, that’s a big part of it because that’s the way we’re harming the planet most of all.

Klare even suggested that humanity should consider retreating from some of the areas that are currently populated yet ill-suited for human habitation. He said:

But I also think that humans now occupy as much space on the terrestrial globe that we should be allowed to occupy. In fact, we should give some back to Mother Nature, wilderness areas and the like. For example, in the American West you see humans building homes in very dry, wooded areas that are prime for forest fires and they’re burning, and I think Mother Nature is saying, ‘you know, this is not where humans are intended to live’. And I could give many other examples of that: building on coasts – this is utterly insane for people to build their homes on the coastlines… they’re going to be flooded.

And he added that some parts of the world should simply be left alone:

I think we should recognize that there are terrestrial limits to where humans can inhabit. And we have to use… those spaces in a sane, efficient fashion to meet our needs and leave the rest of the world – the Arctic, the Antarctic, and the oceans – alone.