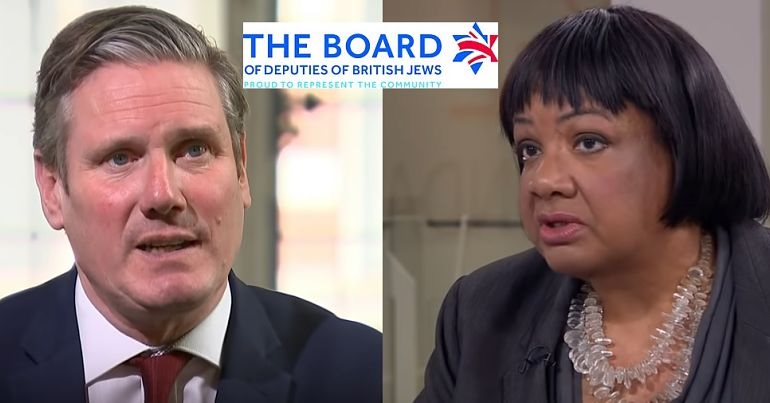 The Board of Deputies of British Jews (BoD) has called for the Labour Party to take “swift and decisive action” against two of its Black female MPs. The BoD’s gripe with the MPs in question – Diane Abbott and Bell Ribeiro-Addy – is that they appeared at a Zoom meeting where suspended Labour members were in attendance.

On 1 May, the Labour Party’s shadow home secretary explained what ‘decisive action’ the party has now taken on BBC Radio 4‘s Today programme. Suffice to say, it’s a fucking disgrace.

As soon as we learnt about this we raised it with Keir Starmer’s office and with the Labour whips.

It is completely unacceptable that Labour MPs, and even ordinary members, should be sharing platforms with those that have been expelled from the Party for antisemitism.

There are numerous issues with this statement. Firstly, attending a Zoom meeting doesn’t necessarily put anyone on its ‘platform’. Hundreds of people can dial in to such meetings, but they don’t automatically get a ‘platform’ on the event.

Secondly, the BoD president claimed people on the ‘platform’ were “expelled from the Party for antisemitism”. Both the Jewish Chronicle and Politics Home named activist and writer Jackie Walker and Tony Greenstein – both Jewish – as attendees of note regarding the BoD complaint. But as Walker noted:

Dear @BoardofDeputies neither I nor Tony Greenstein, who are both Jewish, were expelled for antisemitism

I believe Marie is mistaken … none of the people who spoke were expelled for racism https://t.co/tKLNbswxfP

they’ve been spoken to, I understand, very firmly about this… I think that the leader of the party was right to do that and to remind both the MPs of their responsibilities, and clearly no Labour MP should be sharing any platform with people who have been expelled from the party.

As people pointed out, Labour’s effective response then was to treat the MPs like schoolchildren who warranted a ticking off:

#r4today did I really hear the new Shadow Home Secretary (who?) saying confidently that Diane Abbott had been "spoken to firmly"? Because of the BoD presumably? Diane Abbott, treated like an errant schoolgirl? #WTAF
(If I misheard I apologise, of course)

Meanwhile, some wondered whether the ‘no sharing a platform’ rule will be extended to all previously expelled members of the party:

Just listened back on i-player and he did say it. Also said that sharing a platform with people expelled from the party is not acceptable and that’s been made clear to them. So next time a RW Labour MP appears on the same show as Alistair Campbell, we’ll know what to do 🤬

Others also noted the disconnect between the BoD’s call for swift action against the two MPs and its apparent inaction on a recent report that identified people in the party who were “responsible for the failures in handling antisemitism complaints”:

but no need for 'swift and decisive action' to deal with the people we now know were actually responsible for the failures in handling antisemitism complaints, some of whom are still on the party's payroll.

this tragicomic shit show just goes on and on… https://t.co/XEsrAOso3M

The leaked Labour report exposed “anti-Black racism” within the party. And it hasn’t gone unnoticed that, in its complaint, the BoD criticised Black Labour MPs who are women:

If you want to start this unesscessary war, when some of your supposed “allies”, those RACIST Labour HQ staff, are STILL in post.
You can give it try it.
Setting up and targeting Black women MPs who are already targets. Disgusting!!

Board Of Deputies when Rachel Reeves paid a lengthy tribute to rabid Anti-Semite Nancy Astor: 🔇

Board Of Deputies when Diane Abbott has a zoom conference: “SHE MUST BE EXPELLED”

Got tired of their shit years ago

In other words, the Board of Deputies want Keir Starmer to prove how "anti-racist" the Labour Party is by suspending two black female Labour MPs for holding a Zoom meeting with socialist Jews. If it wasn't so serious, it would be funny. https://t.co/t3JOyu33Js

Anyone calling for their suspension or not giving them their full support in the wake of this ridiculous attack is not serious about anti racism. Truly appalling.

You put two black women and three Jews in your sights. That looks like a full house. https://t.co/Ulm1ZZDcNM

But rather than showing solidarity with the party’s Black female MPs, and calling out this cynical attack for what it was, the current Labour leadership near instantly gave the MPs a scolding. As The Canary‘s Kerry-Anne Mendoza pointed out, this was the new leadership’s “first showdown” with the sort of antisemitism smears against the party that were a constant during Jeremy Corbyn’s tenure.