This May Day, UK renters join thousands around the world on rent strike - Canary 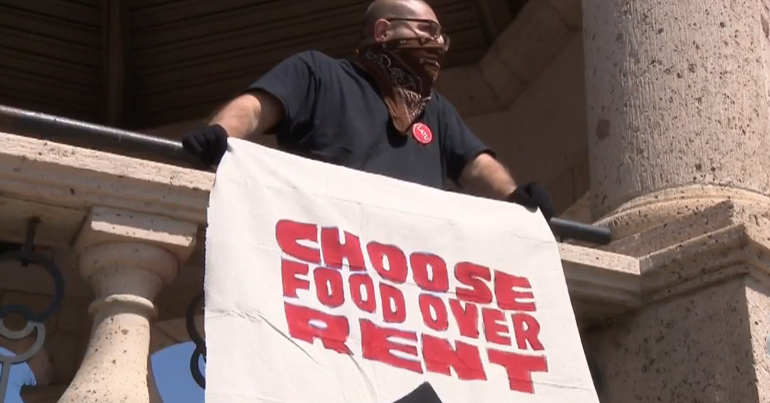 Renters around the world are going on rent strike. As millions of people find themselves in precarious situations due to the coronavirus (Covid-19) pandemic, many will have to choose between feeding themselves or paying their rent.

Coordinated rent strikes ensure that people aren’t alone in their refusal to pay. A mass movement gives people courage to stand up to landlords. There’s strength in numbers.

Rent Strike London has made its demands clear. The activists say, “We’re not asking, we’re not repaying, #RentStrike NOW!”:

🚨 London show your support for this Friday's May Day #RentStrike! 🚨

Let your neighbours know that you support the strike by hanging a white sheet or banner from your window!

London Renters Union is also demanding that rent is suspended. The union has prepared a handy template letter for tenants to send to their landlords.

We're demanding that the government:

1. #SuspendRent
2. Cancels all rent debt
3. Makes the eviction ban permanent
4. Introduces rent controls@KeirStarmer @ThangamMP, Will you join us in calling for the protections renters need?

London’s bus billboards have been subvertised as a May Day action. The posters demand “decent housing as a human right”.

A month ago, a wave of rent strikes began in UK universities. 150 residents at SOAS stated that they were withholding their rent payments. And at Surrey university, 300 people signed up to demand a rent freeze within just 48 hours. Rent Strike collective’s handbook, Can’t Pay, Won’t Pay, explains about this student movement. It also shows students how to organise more rent strikes.

Spread this handbook everywhere and start organizing on your campus.

Thousands go on rent strike in the US

Perhaps the biggest movement to cancel rent is in the US. In New York, billboards have been subvertised as tenants prepare for what The Intercept calls “the largest coordinated rent strike in nearly a century”.

5demands.global, a network of organisers in the US, has released a short video perfectly summarising why people should go on rent strike. The video explains:

renters have been told that they can’t be evicted for the next couple of months in most places. But then what? Most landlords are trying to tell people that they have to pay the money back in the next month or however long they decide. That means that, yes, people’s cost of living can go down for now, if they can tolerate the harassment from landlords who can’t evict them for non-payment of rent. But then they are expected to magically make more money when the pandemic is over while most people already pay at least half their income on rent.

Meanwhile, LA Tenants Union has taken to the streets to demand that rent is cancelled. Thousands are expected to withhold rent. The union tells tenants:

You are not alone. By joining a city-wide rent strike, we build power to demand the cancellation of rent and to collectively bargain with our landlords and lawmakers. If we organize, tenants can build power that will last beyond this crisis and win a just housing system for all.

And Rent Strike 2020, a coalition of organisers, are making an initial demand. They’re calling for every US state to ensure a two-month rent freeze.

As happens in every situation, it’s the poorest in society who are suffering the consequences of the coronavirus lockdown. Even if landlords allow rent payments to be delayed for now, how will tenants ever catch up with payments? Longterm, they will be evicted, or they’ll lose their deposits. There’s only one solution: strike together in unity. “Can’t pay, won’t pay!”