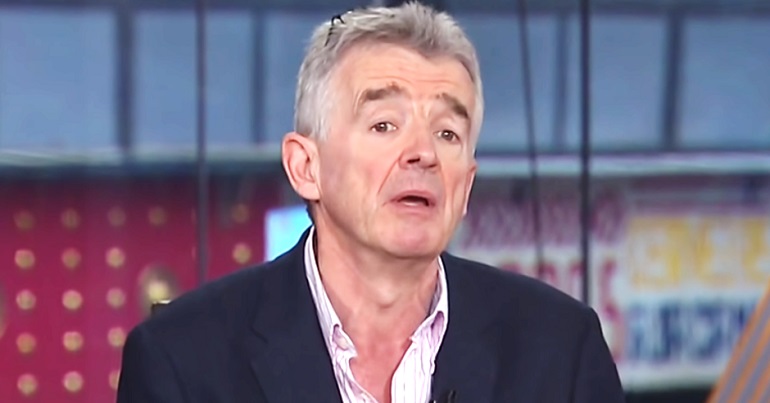 1 May is traditionally International Workers’ Day (IWD) around the world. This year the coronavirus (Covid-19) pandemic has left countless workers around the world in highly precarious situations. And now, one corporation with an already bad reputation has decided that IWD is the perfect day to throw 3,000 members of staff under the bus.

Ryanair has a long history of scandal. From boss Michael O’Leary’s often controversial comments to mistreatment of staff, the airline’s dodgy reputation precedes itself. And now, in response to a bottoming-out of business, Ryanair is laying off thousands of staff.

Sky News reported that the airline is getting rid of 3,000 workers, of which most will be pilots and cabin crew. As it noted:

the remaining staff face unpaid leave and having their pay slashed by up to 20%.

But O’Leary appeared to try and deflect responsibility for the catastrophe away from his company.

In comments to Sky News, he took aim at the UK government. O’Leary is clearly upset that so far the Tories have done little to bail out the airline industry. He told Sky News:

When we do return to flying its clear we are going to have to fly with both hands tied behind our back because our competitors Lufthansa have just received €12bn in state aid, Air France is going to receive €10bn in state aid.

These guys will have the money to engage in below cost selling for the next three or four years.

He put on some crocodile tears, too, pleading that:

We regret these job cuts, we regret these pay cuts, but they are what the well run airlines like Ryanair and other will have to do to survive and compete against the likes of Lufthansa and Air France receiving tens of billions of state aid from their national governments.

But O’Leary’s accusations of a lack of UK government support are not quite true.

Easyjet, for example, has already borrowed £600m from a government loan scheme for businesses. But so far, it seems Ryanair has only used the government furlough scheme to help pay his staff. Moreover, O’Leary has previously been slamming airline bosses that ask for government help. Including Richard Branson.

But other airlines have also taken action away from the UK government. Because even NHS-suing extraordinaire Branson has decided to flog Virgin Atlantic after giving up on his desperate pleas for help to the UK government. He even went as far as putting his private island up as collateral in a bid to get money from the UK public. What a gent.

No such action from O’Leary, though, except him taking a 50% pay cut. A cut which will still see him earn €500,000 plus potential bonuses of the same amount. But for the workers, it seems their union isn’t being much help either.

There has been no warning or consultation by Ryanair about the 3000 potential job losses and this is miserable news for pilots and staff who have taken pay cuts under the Government job retention scheme. …

Aviation workers are now facing a tsunami of job losses.

The UK Government has to stop daydreaming and keep to the promise made by the chancellor on 17 March to help airlines or this industry, vital to the UK economy, will be devastated.

You’d be forgiven for thinking the union is following O’Leary’s line: blaming the government for not doing enough. Because Strutton seems to also be pleading for a public bailout of a private company. So, in the world of the airline industry, it seems that unions are extending the phrase ‘workers of the world unite’ to the fat cat bosses. While the fat cat bosses trample all over workers’ rights. Happy International Workers’ Day.