Thousands of NHS workers to protest this weekend over pay - Canary 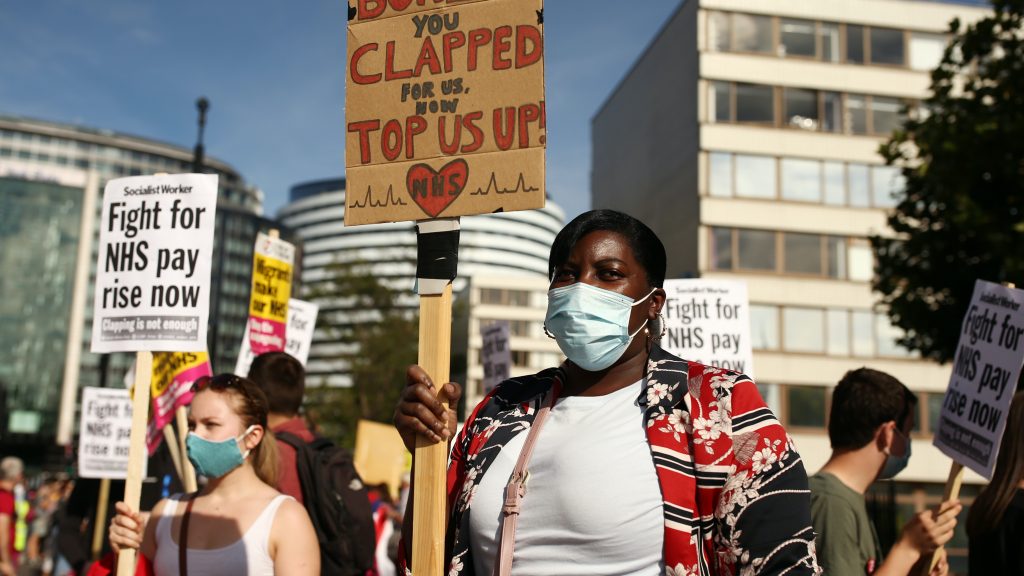 Thousands of NHS workers are expected to take to the streets this weekend demanding a pay rise.

Unite, which has 100,000 members in the health service, said it is supporting those wishing to attend the socially-distanced protests so that the government can see the depth of discontent and frustration among NHS staff.

A demonstration is organised in London on Saturday morning, while protests will also take place in other towns and cities across the UK.

Health workers are in the final year of a three-year deal and are due a pay rise next April, but unions want the government to show its appreciation for NHS staff by bringing it forward to this year.

The government did not commit to an early pay rise for all NHS staff a couple of weeks ago when wage increases for 900,000 public sector workers were announced.

Unite national officer for health, Jackie Williams, said: “Nursing staff and other allied health professionals have reacted with anger to being overlooked when pay rises were given to many in the public sector last month and the government not hearing the health trade unions’ call to bring their pay rise forward from April 2021.

“Last week, health workers marched to Downing Street to vent their anger that all their efforts during the pandemic, which has claimed so many of their colleagues’ lives, have appeared to be ignored when it comes to recognition in their pay packets.

“In a decade of Tory austerity, NHS staff have seen their pay cut by 20% in real terms – and no amount of Thursday evening clapping and warm ministerial words can compensate for this dramatic loss in income.”

They made their way to Whitehall carrying banners that said “Clapping won’t pay my bills” and “We helped you survive, now help us survive”.

A recent survey by Unison suggested more than two-thirds (69%) of people think all NHS employees should be awarded a rise this year.

The union’s poll of more than 2,000 British adults found that two-thirds believed a wage increase should be significant, in light of the Covid-19 pandemic.

The survey found that just one in 10 thinks health workers should wait until April for a rise.