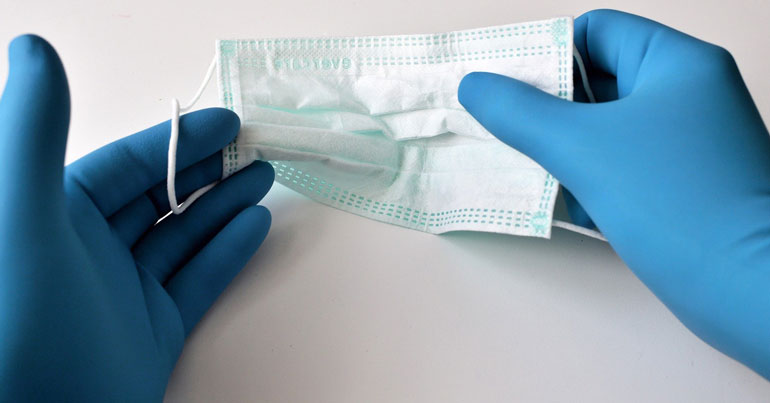 Boris Johnson and his band of merry cronies are once again in the headlines. They signed a £252m contract for Personal Protective Equipment (PPE) for NHS staff; at least £150m of which went on 50 million masks for NHS workers that are unusable. And people are fuming. Because this doesn’t just feel like incompetence. It feels a lot more like a lovely, big stew of incompetence, corruption, and greed.

As Mark Steel explained in the Independent:

The government has again shown how hard it’s trying to keep everyone safe by buying 50 million masks for the NHS. The British Safety Federation has spotted that none of them actually work, but it was a wonderful gesture.

Yes, it turns out it’s pretty difficult for the government to keep everyone safe. Because it picked a financial services company, with no history of supplying the NHS, for this rather important job.

Strangely enough, people are a bit cross. To be fair, there have been a couple of other little snafus since the coronavirus (Covid-19) outbreak – which one Facebook user helpfully summarised: 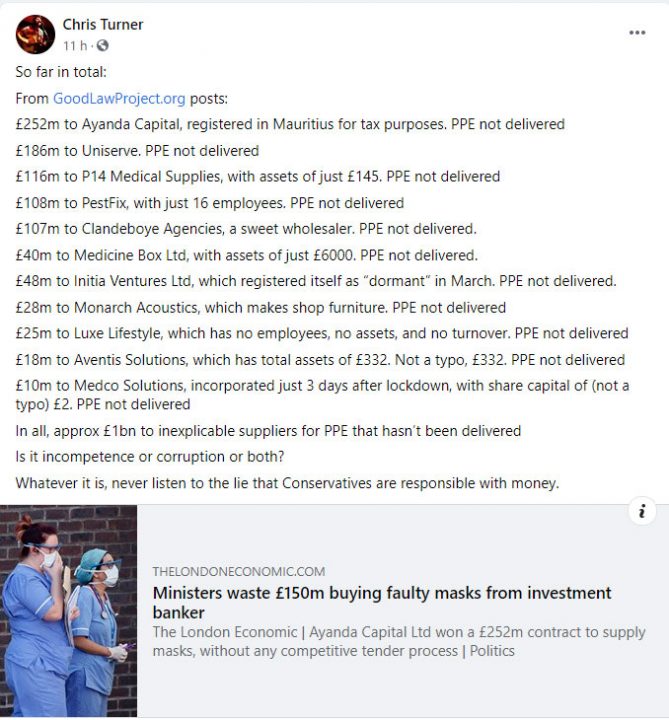 It has led some to muse cynically that we may not be in the safest hands:

This must be what "taking our country back" looks like!

But why on earth would Board of Trade adviser Andrew Mills use a financial services company to supply protective masks for the Health Service?

His LinkedIn also says he’s an ‘senior board adviser’ to Ayanda (Ayanda’s website doesn’t mention him).

When we started tweeting about him he also described himself as founder of Prospermill [A1] but he doesn’t anymore [A2].

We’ll return to that. /3 pic.twitter.com/JRp4XDgMY0

This is wild. Andrew Mills, who so happens to be an adviser to the UK Dept of Trade recommended Ayanda Capital for this job and ironically he also happens to sit on the Ayanda Capital board of trustees. The contract is a sensational £250m (R5.8bn). When abelungu eat, they chow: https://t.co/FgDmNLZBlc

Not a laughing matter

Sadly, although the government’s incompetence is so huge it’s almost comical, and although its apparent corruption is so blatant you couldn’t even satirise it, it’s not really a laughing matter.

Because it’s our money they’re handing out. Lots of it.

A £252m contract given to that company. Let that figure sink in and think about how else that money could have been used, and how hard Captain Tom worked to raise £33m. https://t.co/BjRSvPfM5G

And because, in pandemics, if you’re working on the front line, without the right equipment, you’re likely to get sick and die.

As Rachel Reeves MP put it:

The Conservative Government allowed the PPE stockpile to run down & then bought 50 million unusable masks from an offshore finance company with no history of providing NHS equipment. Our health workers were not fully protected. Tragically lives were lost. https://t.co/I7AGVhukdU

In a pandemic, there’s no room for cronyism, favouritism, and persistent, repeated fuck ups. Really now, Johnson, it’s time to get off the podium.