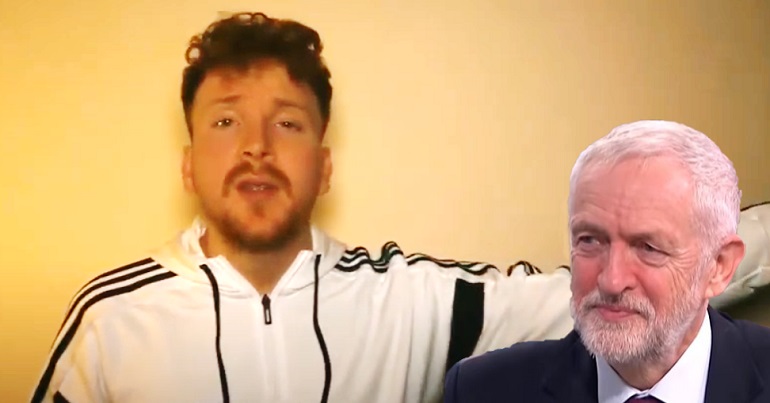 A tribute song to Jeremy Corbyn has officially entered the UK top 25 of the download charts. Its success shows several things – not least among them being the strength of public feeling towards the former Labour leader. And now, Corbyn himself has responded to the song.

Corbyn on Letter to Corbyn

Poet and rapper Craft-D released his track Letter to Corbyn on 14 November. The track started life as a straight to social media upload. But as Letter to Corbyn quickly engaged people, Craft-D decided to release it as a single. It quickly topped the iTunes Hip Hop chart, and peaked at number 12 in the overall iTunes one. Previously, Craft-D told The Canary:

there have been floods of messages and replies of people who related to the song and the lyrics; feeling empowered and voiced.

He sent the lyrics through to Corbyn, who seemed to approve. Now, he’s said during a live event:

It was great, and thank you very much for the song and putting it together. I feel slightly embarrassed about it, because it includes me a lot in it. But think through the issues that are covered in that song: war, peace, environment, hope, unity, and what people can achieve together.

Since then things have quickly moved on.

Lighting up the charts

Letter to Corbyn has now hit number 24 in the UK’s official download chart:

A week on from its release, #LetterToCorbyn has registered in the Official UK Downloads Chart.

This is WILD. I think it's the only one on there without a record label too.

Another huge thank you to everyone who is buying it, and continuing to share it!https://t.co/bDHEj8M3I3 pic.twitter.com/j2mk97K6Bi

No mean feat at all. Letter to Corbyn‘s success is especially amazing because it has no record label behind it and no corporate PR machine publicising it. For a self-released title to do this well is quite something.

Of course, there’s another interesting aspect to be taken from Letter to Corbyn’s chart success. And it’s how the public feels about the former Labour leader.

Hitting number 24 in the charts is impressive in itself. Then, the Twitter video of the track has now had over 200,000 views:

This is a letter to Jeremy Corbyn. pic.twitter.com/cBsJjGPBgh

On YouTube, there’s been over 12,000 views across the various versions of the track.

Ultimately, Craft-D is hopeful some good can be the end-result of Corbyn’s story, and that Letter to Corbyn will help this:

But I sincerely hope some unity can come from all of this, and that those who care about curing the ills of this shambolic and callous Tory government, helping our most vulnerable neighbours, combating racism and tackling the climate emergency, can find ways to come together to fight against the gross injustices being caused by the supremacy of a prejudiced few.

And Corbyn has echoed this sentiment. He said:

If we as a movement, I mean all of us as a movement, cannot unite people to challenge coronavirus; to deal with environmental destruction, to give people hope, security, and jobs for the future – then, what beckons in the corners, are the right-wing, the racists, the free-marketeers, and all the others. And so we have a responsibility to campaign as hard and long as we possibly can on all the issues of social justice.

Craft-D’s mesmerising song has empowered and cemented these ideas in musical form. It’s become a veritable anthem for 2020.

You can stream/download the track on your preferred platform here.