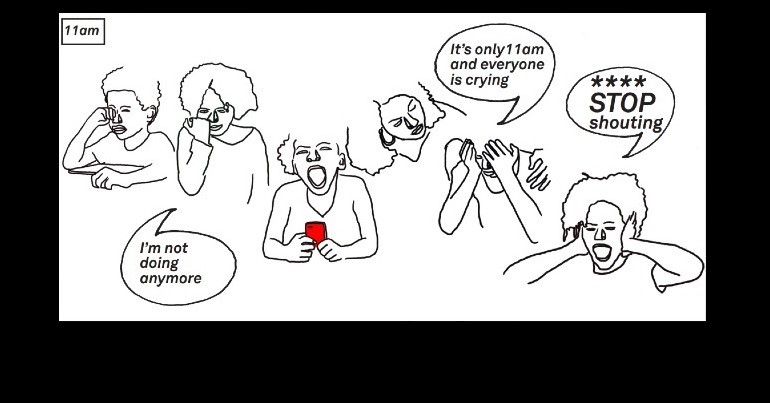 A project which asked working class people to keep diaries during the first coronavirus (Covid-19) lockdown is nearly complete. It’s now nearly ready for release as a graphic novel. But the project of lockdown diaries needs your help. It’s fundraising to get these crucial pieces of class and social history published.

Looking from the inside out

Lockdown Diaries of the Working Class is currently crowdfunding on Kickstarter. It was founded by Dr Lisa McKenzie. She’s a working-class academic and sociologist who’s also an ethnographer. That’s someone who studies human culture and society; kind-of like an anthropologist. The difference is an ethnographer gathers and then presents the information from the point of view of the person/people being studied.

McKenzie’s approach always aims to be inclusive. She includes working-class people in the research process rather than just looking from the outside in at them. An excellent example of this is her groundbreaking book Getting By. McKenzie spent several years interviewing, studying, and observing the residents of the St Ann’s estate in Nottingham. It was the estate she grew up on. The book smashed the establishment’s classist and racist narratives and tropes about life on council estates. Because McKenzie painted a picture of a community, its characters, and its values that the system rarely allows outsiders to see.

McKenzie has now turned her attention to life during lockdown. And the results could make for equally groundbreaking reading.

McKenzie launched the Lockdown Diaries at the start of the pandemic. She was worried about how life for the poorest people in the UK would be documented. That is, she was worried that other people would co-opt and narrate the lived experiences of working class people. McKenzie wanted them to tell their own stories. So, she contacted people she had worked with previously on other projects. McKenzie also put call-outs on social media. As she wrote for the London School of Economics (LSE):

I recruited 38 individual working-class diary writers. Some of them wrote for four weeks, while mothers who were home-schooling did five-seven days. I was sent pictures, images, traditional diaries, doodles, and short video diaries. They add up to an enormous amount of rich data from those first weeks of lockdown.

But for McKenzie, the project was about a lot more than just diaries.

Initially I wasn’t really thinking about what I would do with this. At the beginning of lockdown, like everyone I was watching the telly a lot. And I realised that the same voices had got all the air space. Working class people were either being spoken about or not at all. I sat there wondering what was happening to the foodbank users that would be running out of food or couldn’t get out their houses. I saw the valorisation of the same groups nurses, medics but not others supermarket workers. And I knew from experience that working class voices would be absent now, and totally disappear in a year.

So, I just thought: ask people to write me diaries. I went to the university I lecture at and got ethical clearance. It was going to be a bog standard piece of academic research (it never was but I told myself that).

But getting Lockdown Diaries going wasn’t that simple. McKenzie said that she couldn’t get funding for it:

When I couldn’t get any academic funding to do the academic thing, I realised that I didn’t want working class voices removed by the academic process. So, I thought I’m going to self-publish a beautiful graphic novel; one that pays tribute to our humour, sadness and resilience.

So, Lockdown Diaries was born. The project is currently on Kickstarter. It needs funding of around £12,500 to properly publish it and pay people; not McKenzie though, who’s doing the project for free. You can pledge here. And it’s her approach to the project that partly got it to this point.

McKenzie is different to most of her peers. Being from a working-class background gives her credibility with the communities she works with. And she has always stayed true to her roots. This is crucial. Because as most people from poor backgrounds know, trust of outsiders and people from the system is a major issue. You’re all too often burned by the people who are supposed to be supporting you. As she wrote in Getting By:

Even though I had lived on the estate for over 20 years, the women [McKenzie wanted to speak to] did not welcome me into their lives with open arms, They were initially sceptical… More importantly, most people in St Ann’s were acutely aware that asking questions in the neighbourhood usually led to the neighbourhood being represented negatively, or ‘outsiders’ using local knowledge for their own benefit.

McKenzie was confident that the people would trust her to handle Lockdown Diaries with care and sensitivity. She told The Canary:

I think people trust me. I’m so far away from the normal academic and haven’t let working class people down so far. That probably means I’m a crap academic…! But it also means there was trust. On a personal note, if there was or would be any danger of disrespecting the diary writers, I would have pulled the whole thing. Which is why I’m not glad I’m doing this totally independently and away from the university. It’s on me. And I have always taken my responsibility and love for my class seriously; far more than to the university.

Much like trust, anyone who’s poor knows that time’s not your friend, You never have enough of it. Things you would like to do get put-off because of things you have to do. The idea of ‘choice’ is often out of reach. And the means to get yourself out of income poverty are restricted by time. This is called time poverty. The system which causes people to be time poor often doesn’t recognise it. But it’s a real thing – as many poor, working class people will tell you.

McKenzie made Lockdown Diaries so accessible that none of this was an issue. She told The Canary:

Because I only asked for a maximum of 28 days, I think it was manageable. Some of the mothers who were home schooling only did 5-7 days. But that was enough. I had one diary sent by text everyday, because he didn’t have access to a computer. Some diaries came as images… I had some diarists whose English was a second language. So, they chose to send me photos, some of which came as pictures of actual writing. It all really showed the diversity of who we are.

So, the participants wrote their diaries. And when McKenzie got them, her reaction was telling.

Initially I couldn’t read them. I was living on my own and going through the same stuff. But when I started to read them, I was overwhelmed emotionally. When someone writes to you they write in a far more personal way than an interview. They often started with “Dear Lisa”. And it broke me to be honest. A year on, I’m reading them again and honestly, they are incredible. The humour, misery but also massive resilience is all over them. I have people from East London to rural Wales and everywhere in between. A range of people, of different ages. But all of them incredible writers and documenters.

McKenzie shared a preview of Lockdown Diaries in her LSE column. The project is going to be a graphic novel. And the artist Social Commontating has already turned one family’s lockdown diary into strip art: 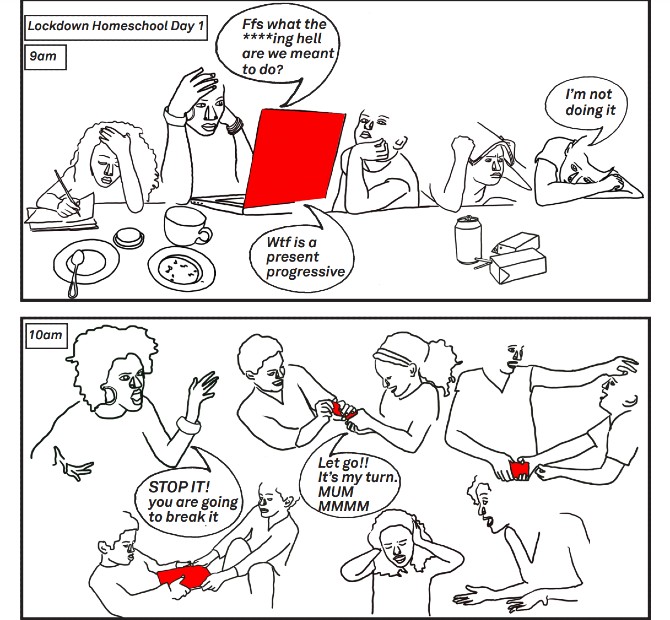 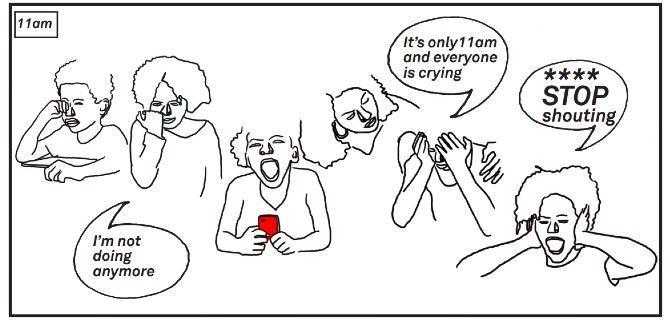 There are things that are similar between McKenzie’s book Getting By and the Lockdown Diaries. One of them is that poor, working class people get to tell their stories. And they’re presented in a way which means none of these people’s truths are lost or misrepresented. Because all too often, this isn’t the case.

I definitely think that since 2008 there has been a gradual decline in working class people having any platform at all. And then it seemed to drop off a cliff after 2013. The middle class have every single space tied and locked up. This means a project like this can only happen through solidarity; from beginning to end.

It cannot be done any other way, because there are too many middle class gate keepers. They tell us what our stories and lives need to look and sound like; what is acceptable and what isn’t. And then we become sieved of everything we are. Finally, we become a pure character of who and what the middle class can cope with around working class people. We need to be the pure victim or the pure enemy: the right-wing football-gammon Brexiteer – or the single mother trying her best working three jobs and advocating education and social mobility to her children. That’s what my intent is in everything I do: to not let the middle class tell our stories and narrate who we are.

Being poor and working class is exhausting:

But what’s also exhausting is the zero representation you have.

Time to take back our spaces

Poor, working class people rarely see themselves in academic, media, or public life. And if they are shown, it’s often stereotypes. Feeling like no-one outside your own community understands or properly reps you is isolating, demoralising, and frustrating. It also makes you angry seeing people who are not working class (but say they are) speaking on ‘your behalf’. So Lockdown Diaries aims to change this.

I just that I hope this type of DIY research and publishing will be taken seriously by ‘them’. Because this is the only way to make sure minority and working class voices are not cleansed and cleaned by the process.

Knowing McKenzie, no filters will be needed. Lockdown Diaries should be a groundbreaking, heartfelt, and important project. And moreover, it will mark an important moment in the history books: one where working class people’s voices were properly heard.

You can pledge to the Lockdown Diaries Kickstarter here.