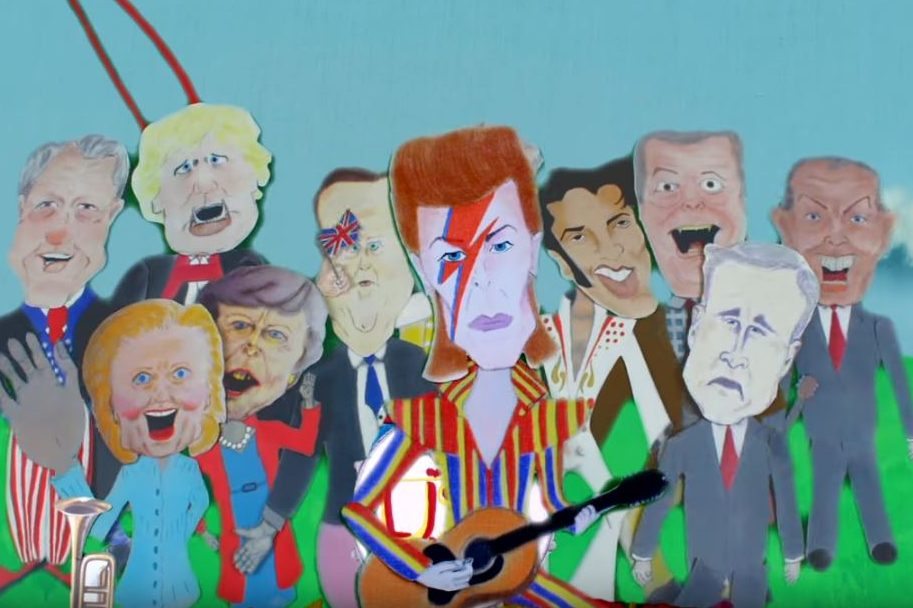 Millions of Brits will recognise the unmistakable voice of Hayley Sanderson – as one of the resident singers on flagship BBC show Strictly Come Dancing. And now, she has sent out a very tongue-in-cheek ‘message to the USA’.

The story behind the Strictly singer

Though Strictly‘s focus is on the dancers, most viewers would acknowledge the stunning job the musicians do. They consistently demonstrate versatile and highly polished performances, week after week, that the average X-Factor contestant could only dream of. The entire ensemble – led by Dave Arch – is undoubtedly one of the very best live bands working in television today.

Also a song writer and saxophonist, Sanderson has arranged and written songs for a whole host more, including Lulu and Gilbert O’Sullivan, who she sings with on his 2013 album Gilbertville. On top of that, she has regularly collaborated with Rick Wakeman, most notably on re-recordings of his milestone albums Journey to the Centre of the Earth (1974) and The Myths and Legends of King Arthur and the Knights of the Round Table (1975).

How her current project speaks to US voters

One of Sanderson’s current projects is ‘The Stylophones’ – a band with a political/satirical slant. Speaking to The Canary, she said:

I’ve always written songs with Lewis (from Think Floyd) and we’ve known each other since childhood. We started The Stylophones a few years ago as a platform for our music, but it’s now turned into a visual thing, too. I love film, theatre and art and wanted to include all three in this project. I get awfully bored of only hearing love songs or songs about sex and boobs. It can be fun for three minutes but I want to be stimulated by music and lyrics in a deeper way.

All the artists I like talk about a variety of things. These days, it seems frowned upon to talk about anything other than brain numbing subjects. I think it’s a shame artists like Lorde and Lily Allen, or comedians like Russell Brand, are discouraged and/or annihilated for having an opinion. Whether one agrees with them or not, too many people are told to keep quiet. Music and art used to be a platform for new ways of thinking – Punk and Jazz, and not forgetting Floyd!

The Stylophones comprise of Sanderson, Lewis Hall and Kerry Conway-Stammers (who both appear in the video), Matt White, and Geoff Holroyde.

In the video for their latest track U.S.A, news anchor ‘Judge Bitterman’ – a clear Donald Trump supporter – introduces the song with impassioned nationalist rhetoric. As the song begins, we see a whole cast of famous, or infamous, political characters – gloriously rendered with hand-drawn animation and a rather splendid use of plasticine. The song ridicules them in a typically British way, as made famous by TV shows like Spitting Image, and others since.

Parallels between Britain and the US

In U.S.A, The Stylophones comment on the eerie way in which politicians from both sides of the Atlantic seem to mirror each other. Or more specifically, how British politicians aspire to an ‘American’ way of doing things. As Sanderson told us:

U.S.A is about the Brits’ obsession with American culture. We love their TV, entertainment, and values, apparently. They go to war: ‘no worries, we’re right behind you!’ You’ve got Trump? We’ve got Farage! You have Jerry Springer? Introducing Jeremy Kyle!

It’s not a video in support of Hillary or Trump. I have a feeling they already know exactly what they’re doing, and the show they’re putting on is a spectacular piece of entertainment for the masses whilst a few people at the top play a giant game of monopoly.

As well as being a bright and incredibly catchy tune, and featuring a trombone (an instrument sorely lacking in most modern music), even more impressive is that Sanderson and Conway-Stammers did all the artwork and animation – virtually teaching themselves from scratch. Make sure to look out for Donald Trump as a wriggling dough-like substance, and the tiny Mexicans building a wall of Lego around him. It’s quite poetic.

To finish off, we asked Sanderson about her reading habits and attitude to today’s news in general. She said:

The Canary is a breath of fresh air! Generally, you’re branded a ‘loony lefty’ if you read from sources other than the mainstream, but I’m pretty disgusted by some of the supposed ‘news’ outlets. They’re so dangerous! They have a responsibility to the public to provide unbiased information. People believe everything they’re told. And why shouldn’t they? They’re watching ‘the news’! We grow up to think that is where facts are discussed. So why would most people question it?

We can’t fault the logic either.

But whatever decision US voters make on 8 November, you can be sure The Stylophones will have plenty more to talk about, one way or the other.