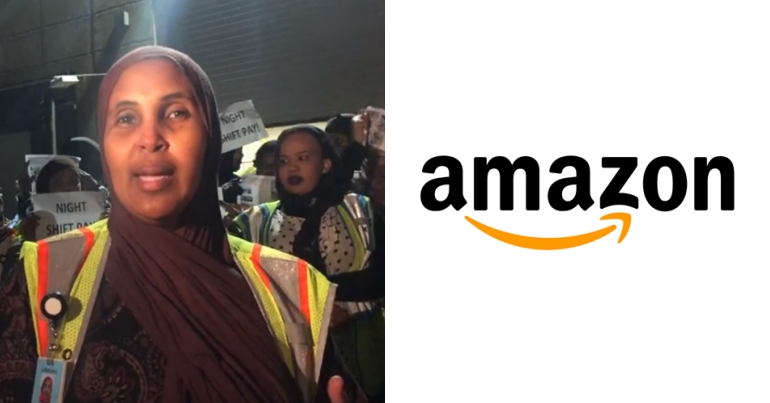 On 3 October, over 50 night-shift workers walked out of an Amazon delivery station in Minnesota USA. The protest, predominantly led by East African women, demanded “respect” as well as better pay and conditions.

And while this protest lasted just two and a half hours, Amazon had to cancel their truck deliveries that night. It’s also part of a growing trend of workers rising up against the multinational and its “poor working conditions”.

BREAKING: Over 50 mostly East African workers have waked out of the Eagan, MN @amazon delivery station, DMS 1. Night shift workers are demanding; respect, reduced workloads, restrictions on heavy boxes, and a reversal of the 30 hour a week cap pic.twitter.com/r2lSpVKTAO

The night-shift workers walked out demanding “respect, reduced workloads, restrictions on heavy packages, and a reversal of the 30 hour a week cap”.

Night-shift associate Fadumo Yusuf said “we have so many issues” including shortened break times and difficulty praying in the workplace. Break times that should last 15 minutes last just ten, according to Yusuf. She explained that workers have to lift heavy boxes during their shift:

She said, “they treat us like we are not human beings”.

Support for the protest

Many people showed support for the Minnesota protest action online:

I saw a tweet about this last night and thought "These workers are amazing and I really want to hear more from them" and it shouldn't surprise me that you were on it. Thanks, comrade

The decision to strike

The night shift workers demanded an increase in their hourly rate of $16.25 an hour as it’s the same as the day shift rate.

One of the protest organisers Kadijo Mohamed said the workers decided to act because:

The managers don’t listen. They ignore complaints. Sometimes they say ‘if you can’t handle this job, you can quit’.

The strike ended when an Amazon manager said it would ‘resolve the issues in the morning’. But the workers say they “remain prepared to take action if no changes are made”.

And it’s not the first time workers at this plant staged a protest. On 8 August 2019, 80 workers walked out to protest against parking conditions. Some workers’ cars were towed away while at work. In July, workers also walked out on Amazon Prime Day to demand “safer working conditions and less demanding quotas”. Prime Day is Amazon’s annual shopping day exclusive to its prime subscribers.

On 20 September, almost 1,000 workers walked out to protest Amazon’s “huge carbon footprint”. And on 30 September, Sacramento Amazon workers formed Amazonians United Sacramento. They did so after Amazon fired their colleague for going one hour over her bereavement leave when her mother-in-law died.

These Amazon workers are part of a wider fight for better working conditions. US presidential candidate Bernie Sanders is one of the leading voices campaigning for better pay and conditions for low-paid workers. And working people have responded in kind by supporting Sanders’ campaign to become the next president:

.@BernieSanders raised over $25 million in the third quarter and his biggest donors are

They are donating to Bernie because they trust him to fight for working class Americans. pic.twitter.com/SNWLSv7mrV

So while small in number, this protest got some results. And it could serve as an example to workers around the world who are tried tired of accepting “poverty wages” and poor conditions.