Johnson's Brexit proposal has sold out the DUP, but the DUP's attacking the Irish government instead - Canary 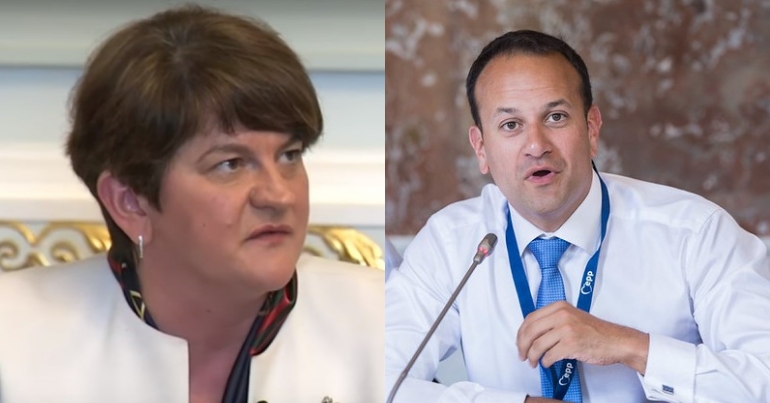 When the EU and the Irish government effectively rejected Boris Johnson’s latest Brexit proposal, it led to a furious response from the DUP. But the DUP misplaced its fury. It should, instead, have directed it towards the ludicrous nature of Johnson’s proposal. Because if Johnson’s deal was to be accepted, it would leave the north of Ireland with two borders.

“The plan now submitted to Brussels is a stitching together of various ideas floated by Mrs May and rejected by the EU. Absurdly, it now suggests two borders — one on the island of Ireland itself and another in the Irish Sea.“

However, and most importantly, the DUP is ignoring that this new proposal crosses its own “blood red” line and represents a massive U-turn.

And while this latest offer isn’t completely dead in the water, the EU has asked for “fundamental changes”.

Johnson’s proposal makes a liar of the DUP

In October 2018, the DUP’s Arlene Foster warned then prime minister Theresa May that it couldn’t accept a Brexit deal that put a border in the Irish Sea. Because such a border would separate “Northern Ireland and the rest of the United Kingdom”. And in September this year, the DUP restated that position. But that’s exactly what Johnson’s proposal means.

Johnson’s Brexit proposal to the EU would see the UK leave the EU on 31 October as planned. The north of Ireland and Britain would leave the customs union on that date also. A customs border would then be imposed on the island of Ireland, as the south of Ireland is staying in the EU. So products that moved between the north and south of Ireland would have to pay taxes. Damaging as that would be to local businesses, it sounds straightforward.

However, just to complicate matters, Johnson is proposing the north of Ireland would still follow “EU single market rules on agricultural and food products” while Britain would not. So food products going between the north and Britain would have to be checked at some kind of border on the Irish Sea. This check would ensure the products adhered to EU standards. But this would also separate the north from the UK. So it crosses the DUP red line.

And as Johnson’s plan proposes two borders on or around Ireland, the north of Ireland would then be effectively cut off from Europe, Ireland, and the rest of the UK.

So rather than accept responsibility, the DUP rounded on the Irish government. When an tánaiste (Irish deputy prime minister) Simon Coveney stated Irish opposition to Johnson’s proposal, Foster said his remarks were “deeply unhelpful, obstructionist and intransigent”.

Then on 4 October, the DUP said an taoiseach (Irish prime minister) Leo Varadkar was “poking unionists in the eye” when he spoke of a united Ireland. Varadkar suggested this as one of five ways of avoiding a hard border in Ireland post-Brexit.

But hard-line unionists like Traditional Unionist Voice’s (TUV) Jim Allister again made it clear how the DUP had shifted its position. Allister said:

But the criticism didn’t just come from within political unionists. It also came from the north’s business community and many others across the spectrum.

Who is backing the Prime Minister's new #Brexit plan?

Manufacturing NI lambasted the proposal as “worse than No Deal for Northern Ireland businesses”. It also said:

Also means two borders requiring renewal after four years, surveillance in border communities without their consent, checks North/South and West/East, no exemptions, no market access and import VAT. 1% of our manufacturing firms are large businesses. The other 99% are SMEs.

They have neither the capital or the capacity to handle these new complexities and associated costs.

The DUP, like Boris Johnson, got fully behind the Brexit referendum in 2016. It even accepted £435,000 to be spent on the pro-leave campaign. So this is their mess and responsibility, not the Irish government’s. Ireland owes the UK nothing.

In any case, both the DUP and Johnson could be forced into the most embarrassing U-turn of all if they have to request an extension to the Brexit leave date. The DUP was already set to potentially lose “a number of seats” at the next election. So a further climbdown could give it and Johnson’s Tories exactly what they deserve.