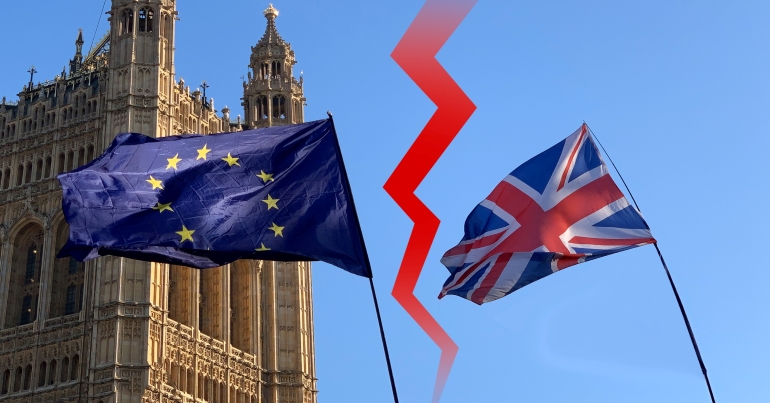 On 29 September on BBC 5 Live, Stephen Nolan interviewed Andrew Bowie, a vice chair of the Conservative Party. They discussed the latest Tory and DUP proposal for the Brexit crisis.

When Nolan asked him if the British government would consider a time-limited backstop as a solution to the Brexit crisis, Bowie said:

Breaking : Conservative party vice chairman Andrew Bowie has told @bbc5live Nolan a time limited backstop IS one of the solutions being considered by the British govt as a solution to Brexit negotiations .

DUP leader Arlene Foster had already said, at a fringe event at the Conservative Party conference, that her party would “look at” such an option.

Understandably, lots of people were confused by this. Because not only has a time-limited backstop been rejected by the Irish Government, but the DUP believes the backstop is both “undemocratic and unconstitutional”.

So reaction online was equally confused. Firstly, hard-line loyalists who are “staunchly pro-Brexit” warned against the DUP betraying them. And reaction also came from those who know this idea has been rejected. This highlighted how confusing the Tory / DUP position was. So it wasn’t clear exactly why both parties were talking about it again.

It’s not a matter of duration, but of toxic Union-dividing content.

Others from the loyalist fringe saw it as a betrayal:

The proposal by Arlene Foster for a ‘time limited backstop’ is a proposal for an economic United Ireland. That isn’t acceptable for even one day. A monumental roll over by the appeasing section of the DUP. I trust the MPs will quickly reject this proposal @StephenNolan

But one political commentator saw it as a strategic move by the DUP to avoid losing seats at the next election:

1. . This is obviously a significant erosion of DUP’s ‘blood red lines.’
2. They’re terrified of being blamed for ‘no deal’ chaos and losing half their Westminster seats in the imminent election.
3. Any backstop would of course be time-limited – because NI is now time-limited. https://t.co/Z2JgOQ6L16

We’ve been here before!

Tánaiste (Irish deputy prime minister) Simon Coveney rejected a time-limited backstop proposal in October 2018. Arlene Foster even admitted that her suggestion wouldn’t be accepted by the Taoiseach (Irish prime minister) Leo Varadkar. So people took to social media to express their utter bewilderment, and to remind Foster of this:

Ffs, how many more f#cking times do we have to go around in circles. Not a backstop if time limited.

And of course you report again the Irish and EU have already previously rejected this.. pic.twitter.com/Evj155qPHF

"Time limited" = "NOT A BACKSTOP". How many times?

Arlene Foster knows fine well a time-limited backstop was rejected, even Johnson said so in June. Why is she hinting at it? So the DUP can say to their gullible voters "we tried but Ireland and the EU were intransigent."

It's just, yet again, a different form of lying. #Brexit

As this proposal was already rejected by the Irish government, it’s difficult to understand whether the DUP and Tories are seeking workable solutions or just making it look like they are. Either way, this approach doesn’t breed confidence.

Of course the possibility that DUP and Tory Brexiteers have softened can’t be ruled out. But from a government that rides roughshod over democracy through proroguing parliament, and a prime minister who has bluntly rejected seeking an extension date to Brexit, it’s increasingly difficult to take them seriously at all.