The DUP has just threatened Theresa May. The Irish border is ‘blood red’. - The Canary 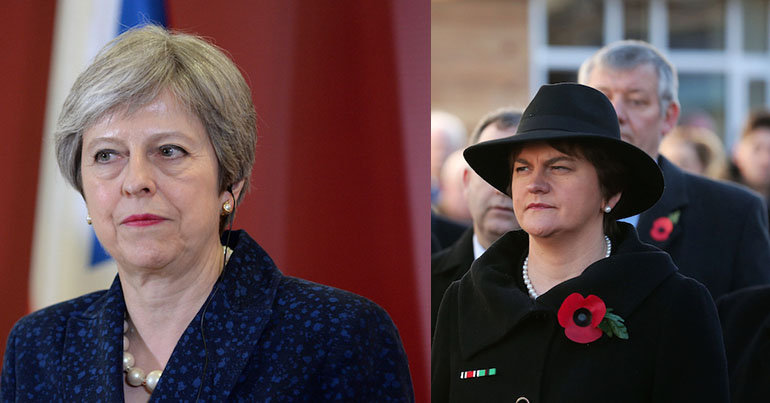 DUP leader Arlene Foster has just threatened Theresa May’s Brexit plans. In an interview broadcast on 3 October on BBC Radio 4, Foster said a compromise on the Irish border crosses a “blood red” line for the DUP. Previously, Foster explained that a border on the Irish Sea, in any Brexit deal, is unacceptable to her party. Before her Radio 4 interview, she said it would be a “red line” issue.

But Foster upped the ante in this interview, as she strongly opposes any deal that sees Northern Ireland separated from the UK:

Northern Ireland was at war and soaked in blood for 30 years. As Foster suffered personally in that war, she must be aware of how dangerous her language is. And the reaction online was swift. Most posters picked up on the dangerous parallels between her language and Northern Ireland’s past:

Questionable choice of words given history & prediction of Brexit turmoil

No surprise here. Disgusting choice of words. Now you are all seeing them in their true colours. Holding NI back in the dark ages and now holding UK to ransom too. She’s not interested in a good solution for Brexit. It’s all based on not breaking her precious Union. Nothing else

Do these people not consider their choice of words? Almost like they are inciting the violence that will inevitably follow

So @BBCRadio4 now quite happy to promote “dog whistle” calls to terrorism – lovely, well done you.

Foster has no right to speak

Others recognised that the majority of people in Northern Ireland voted to remain. So they questioned Foster’s right to speak for them given that the DUP campaigned for Brexit. A recent survey showed that support for Northern Ireland to remain in the EU has increased:

Recent polls suggest 69% in NI are against Brexit, she doesn’t speak for NI

She’s not all about democracy. Remember, 56% of N Ireland (where she’s from) voted to remain.

What if Foster pulls the plug?

Theresa May is holding onto power by a thread. That means she needs the support of Arlene Foster’s 10 MPs. But if May crosses the “blood red” line, she loses Foster’s support.

In one fell swoop, that would rid us of both the Tories and the DUP. So if Foster follows through on her threat, she would be doing the British people a huge favour.

– Support a people’s vote on Brexit.