While Theresa May was 'dancing', here's what happened outside - Canary Workers’ Co-op 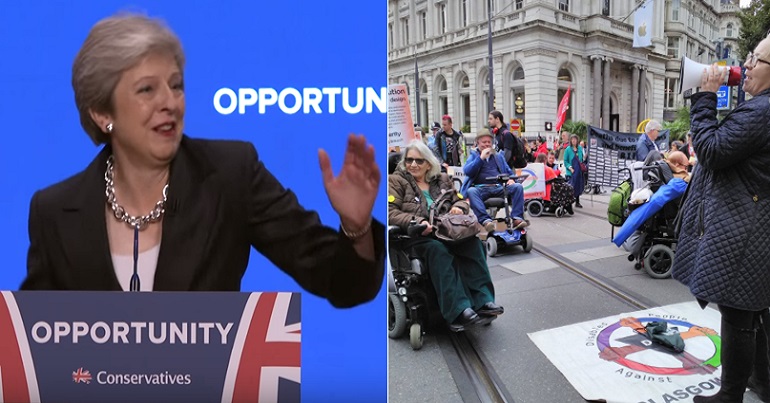 As Theresa May was dancing around the stage at the Conservative Party conference, things were much more serious outside. Because disabled people were protesting about what the UN has called “grave” and “systematic” human rights violations on her party’s watch.

Campaign group Disabled People Against Cuts (DPAC) staged a protest in Birmingham on Wednesday 3 October. The demo was supported by people on Twitter. They used the hashtags #ToryCutsKill and #HostileEnvironment. The protest was for what DPAC said were the:

thousands of disabled people [that] have been killed by the [Tories’] policies and mindless cruelty.

In short, people were raising awareness of what the UN has called a “human catastrophe”:

They ended up outside the conference:

#ToryCutsKill man here said that one Tory delegate told him 'next time I ll cut you' @Dis_PPL_Protest pic.twitter.com/FRXl35qSog

#ToryCutsKill holding up the tram at #Birmingham corporation Street pic.twitter.com/JPYZ4oJrDc

And they blocked the roads:

I have been working in mental health for 20 years and around the system for far longer.

In all my years, I have never witnessed such horrendous conditions for those who have been let down by society. #CPC2018 #HostileEnvironment #ToryCutsKill pic.twitter.com/IdnMOlPtcW

#ToryCutsKill #CPC2018 #CPC18 #HostileEnvironment
The Tories refuse to stop and scrap UC which is driving people into poverty and destitution pic.twitter.com/mIBSWSkztu

And as ‘Sarah’ pointed out, May dancing to ABBA wasn’t really funny:

Did you see how she walked onto the stage? They think this is all a big joke. #WereNotDancingAnymore #DancingQueen #ToryCutsKill https://t.co/ezN3SbKMJl

The fact that the PM felt she could start her speech by strutting around to Dancing Queen shows her party’s arrogance. Because as The Canary has documented, disabled people have been subject to what the UN has called “grave” and “systematic” violations of their human rights. The chair of one UN committee even called the situation a “human catastrophe”.

Claimants of Department for Work and Pensions (DWP) welfare have suffered numerous benefit cuts, the flawed Work Capability Assessment, and the closure of the Independent Living Fund. But most critically, thousands and thousands of people have died on the DWP’s watch.

DPAC’s continued pressure on the government shows it will not silence disabled and sick people. And a ‘dancing clown’ posing as the PM won’t, either.