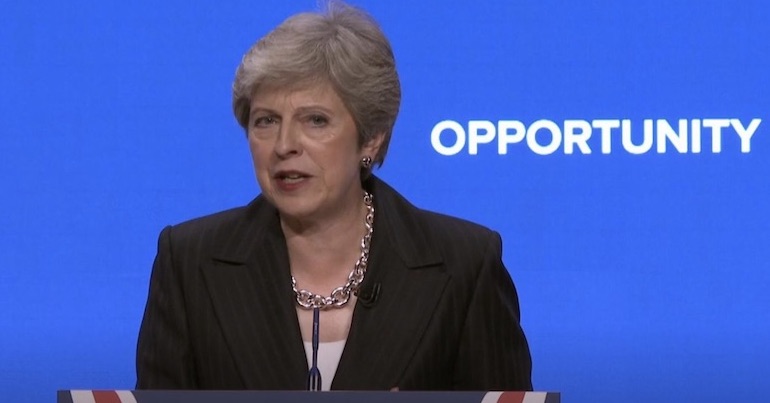 In her Conservative Party conference speech, Theresa May just insulted millions of people. People whose lives have been destroyed by eight years of Tory-led austerity.

“A little bit of money left”?

May spoke about “the difference it makes to have a little bit of money left to put away at the end of each month”. She claimed it could be measured in more than “pounds and pence”. Apparently, this creates:

the joy and precious memories that a week’s holiday with the family brings. It’s the peace of mind that comes with having some savings.

She was generous enough to acknowledge that:

Many people, in towns and cities across our country, cannot take these things for granted.

Millions of people in the UK don’t have enough money for housing and food. So the prospect of “a little bit of money left to put away” is a total insult. The situation is so bad that, in November, the UN is heading to investigate poverty in the UK.

And many people took to social media to point this out:

She plays the part but offers nothing to people living in poverty. Their daily struggle will not change. Her speech was shameful. Tories have cut and cut and cut until the country is bleeding

Super-Rich billionaires have been given tax cuts, while the rest of us pick up the bill. Austerity has killed people. Over 14m are now living in poverty. Foodbanks can’t keep up with demands. How can Theresa May stand on the stage and dance when people are dying.

Tories have no empathy, this won’t bother them:….

There are now four million children across the UK living in poverty and the UK is on course for the biggest increase in inequality since Margaret Thatcher was Prime Minister.

And as for the ‘joyful’ memory of a holiday, forget it. Many families can’t afford to even feed their children in the holidays. The Trussell Trust also made a call for more food donations in the summer holidays because many families rely on free school meals during term time. Deaths from malnutrition in the UK, meanwhile, are rising.

According to the Child Poverty Action Group (CPAG), more than one in four UK children now live in poverty. In some areas, this accounts for over half the children.

As for “peace of mind”, under this Conservative government wages are stagnant and benefits have been slashed. There’s a growing housing crisis. And since 2010, the number of people sleeping rough in the UK has risen 169%.

“Our best days are ahead”?

After skipping in to ABBA’s Dancing Queen, May’s speech was an utter insult:

Although she claimed that “our best days lie ahead of us”, it’s pretty clear that “us” ignores millions of people whose lives have been destroyed by Conservative government policy:

Theresa May: “Our best days are ahead”.

The only real ‘opportunity’ May and the Tories propose is to continue to screw millions more people over.

Get off the stage, May. Enough is enough.