With Tories branding their conference a 'disaster', Laura Kuenssberg swoops in to save Theresa May - Canary 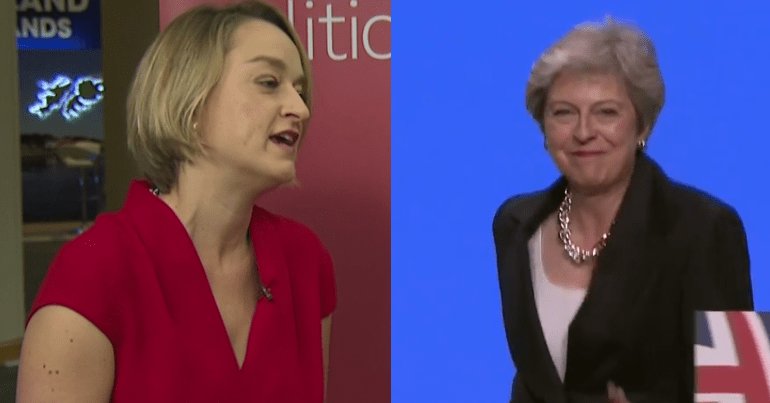 Even Conservative MPs are branding their conference a “disaster”. But BBC political editor Laura Kuenssberg seems to be trying to undo the damage:

The home secretary, the foreign secretary, and the Conservative chair all delivered keynote speeches to a conference hall barely half-full. And on 3 October, it was the prime minister’s turn.

While Conservative supporters filled the hall, May had very little to say on policy announcements. There was not even an attempt at approaching the fundamental challenges Britain is facing, such as elderly care, climate change or automation. Instead, May walked on stage boogying to the sound of Abba’s Dancing Queen. And the BBC‘s political editor thought it was brilliant:

PM massive sense of humour alert – comes on to Dancing Queen, jigs about and starts with a gag about her cough and the collapsing backdrop – hall loves it

Although not everyone had the same reaction as Kuenssberg:

Theresa May dances to ABBA's "Dancing Queen" as she makes an entrance to the Tory conference like a drunk elderly aunty at a wedding.pic.twitter.com/6cWVq4p461

Dear Theresa….try that dance in front of the people of Grenfell, try it in front of the homeless, those with depression, the jobless, the asylum seekers..infact anyone who has suffered at the hands of Tory policy…see how that plays! #theresamay

Just before May’s flagship speech, Conservative MP James Duddridge submitted a letter of no-confidence in the prime minister. Criticising May on Brexit, Duddridge also described the conference as a “disaster”.

Conservative MP James Duddridge says the Conservative conference has been a "disaster", and says Theresa May's refusal to "rip up Chequers" and Boris Johnson's "inspirational" speech yesterday are the reasons he's submitted a letter of no confidence in Theresa May pic.twitter.com/l6eXFJyOZd

Duddridge is the fifth Conservative MP to declare his no-confidence letter publicly. But 30-40 MPs have reportedly submitted letters privately. In order for Conservative MPs to trigger a vote to bring down May’s leadership, 15% (or 48 of them) must have called for one.

Conservative MP Ben Bradley wasn’t happy either. Bradley lamented the lack of “real” policy announcements and said that he found that “frustrating”, continuing:

And it’s not just an apparent lack of vision. At the beginning, a major security flaw in the conference app allowed anyone to access the private details of senior Conservative politicians.

“This is going pretty well”

Still, Kuenssberg has been busy painting the picture of a strong prime minister:

To many Theresa May has been the most calamitous prime minister going. But not Laura Kuenssberg #CPC18 pic.twitter.com/dzlolcR9iB

Feels like hall breathing a big sigh of relief that after last year’s horror, so far, this is going pretty well

Without mainstream-media backing and millionaire supporters, it’s hard to see how the Conservatives would survive. Aside from the fringes, their conference has been barren of ideas. May’s speech didn’t even attempt to solve Brexit, let alone the existential crisis of climate change. From just about anywhere outside the BBC, it looks like May is dancing on the grave of her own party.

– There are also many other new media organisations working to deliver news, analysis, and opinion in a more independent and ethical way. Please support them too: