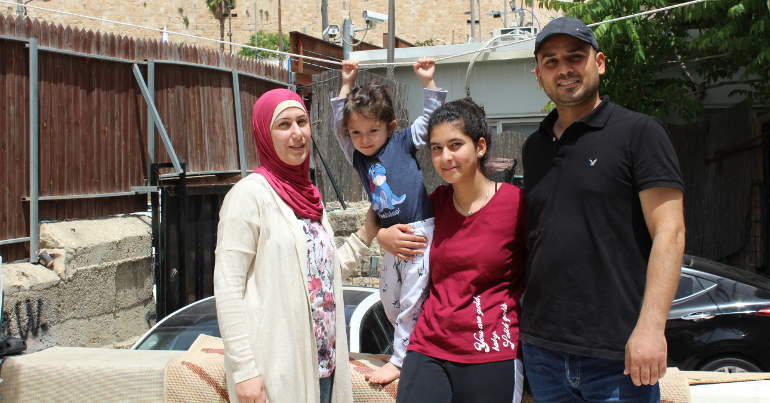 In 2018, I visited the Sumarin family in their East Jerusalem home, right by the walls of the historical Old City. Welcoming me with sweet tea and biscuits, Ahmad Sumarin told me about the their decades-long fight in the Israeli courts to keep their home. Like other Palestinian families in the Silwan neighbourhood, the Sumarins are in danger of being evicted to make way for Israeli colonisers.

Now, two years later, the family faces one last, urgent battle. On 30 June, the Israeli court will hear the family’s final appeal. “There are six children in this household,” Ahmad explained to me. If the family loses in court, the children will all become homeless.

Why are they being made homeless?

The Sumarins built their home in the 1950s and have lived there for generations. But the Jewish National Fund (JNF), an Israeli NGO and substantial landowner, has been attempting to steal the house for decades, using a dubious Israeli law. Through its subsidiary Himanuta, the JNF intends to hand the house over to Israeli colonisers, amid the Israeli government’s ongoing attempt to ethnically cleanse East Jerusalem of Palestinians.

This video by the Sumarin Coalition summarises the Sumarins’ long battle:

British MPs: ‘Ethnic cleansing is one of the most serious crimes’

So far, 53 MPs have signed an Early Day Motion (EDM), strongly condemning the JNF’s ongoing attempts to evict the Sumarin family. The EDM also states that:

[The House] reiterates that ethnic cleansing is one of the most serious crimes, and that the UK is committed to upholding international law; urgently requests the Government to intervene on behalf of the Sumarin family, and calls on the Charity Commission to review the charitable status of JNF UK.

Jewish people already made an official complaint to the Fundraising Regulator about JNF in the UK, arguing that it funds activities in contravention of international humanitarian laws.

The Sumarins explained how the JNF uses its funds:

The JNF gets money from all the European countries, and takes it to occupy Palestine. It gets millions from outside and uses [the money] to get lawyers and occupy wherever it wants.

People in Europe think that they’re giving money to the JNF and Himanuta for [planting] trees and for doing something good. But they don’t know that they take the money to occupy. People can’t imagine what the JNF does here. Maybe you give your money to help a poor man. You don’t know that [the JNF] takes it to pay millions to lawyers to take your house.

The lawyer said there is little hope. We have only one lawyer and [The JNF] has fifteen lawyers. They are stronger and can take anything they want.

Jewish-Israeli anthropologist and activist Jeff Halper founded the Israeli Committee Against House Demolitions (ICAHD). He explained to The Canary:

The case of the Sumarin family is yet another expression of a key element of Israel’s colonial policy towards the Palestinians and their lands that gets scant attention: the policy that Israel itself called ‘Judaization’.

The term ‘Judaization’ has been used extensively by Israeli ministers and academics, as well as Israel’s mainstream press, to describe the process of changing the demographics of an area, depopulating its Palestinian Arab and Bedouin communities and settling Jewish people. According to Israeli human rights organisation B’Tselem, East Jerusalem is now “home to at least 370,000 Palestinians and some 209,000 Israeli settlers [colonisers]”.

Hundreds of Silwan’s Palestinian residents face eviction to make way for colonisers. The Israeli state has forced others to demolish their own homes. Standing on the roof of the Sumarin home, it’s haunting to see the colonisers’ flags flying from the rooftops of homes that have been stolen.

There are so many [Palestinian] families with this same problem. Every year [the JNF and Himanuta] take more houses, [using] the same law in every house. Israel’s law protects them and lets them take any house they want.

‘We may just save the Sumarin family’

Dick Pitt of campaign group Stop the JNF told The Canary that there is still hope. He stated:

Five days after George Floyd was killed, an unarmed autistic Palestinian, Iyad Halak, was killed by Israeli police as he lay wounded on the floor. For decades the Israeli state has illegally taken Palestinian land, whether on a small scale such as attempts to evict the Sumarin family, or bigger, with the proposed annexation of the Jordan Valley into Israel. Just as the violence and racism of the US police has continued until it is meeting resistance, so Israeli violence and racism will continue until the world says this is unacceptable.

Right now the issues of human rights, opposition to illegal occupation, opposition to ethnic cleansing and basic human compassion line up to say this eviction is wrong.  If enough of us act now with petitions, letters, [and] pressure on MPs to sign Early Day Motion 529, we may just save the Sumarin family from unjust eviction.

Using in this case the Jewish National Fund, a quasi-governmental corporation with charitable status in the UK, Israel is expending time, resources and political capital on removing one family on doubtful legal and moral grounds. If this is allowed to happen, if the UK government continues to grant the JNF charitable status, if the Jewish community and other ‘pro-Israel’ voices continue to support policies of Judaization and displacement, then they are all complicit. We of the Israeli Committee Against House Demolitions (ICAHD) call on the British government to protect the Sumarin family and revoke the political JNF’s charitable status.

After decades of fighting to keep their home, the Sumarin family needs everyone with a conscience to take action. “People outside can put pressure on the JNF so that it can’t occupy all the houses it wants,” Ahmad Sumarin told me.

You can contact your local MP, informing them of the plight of the Sumarins and asking them to sign the Early Day Motion. You can also ask MPs to contact the Foreign Office and the Israeli embassy to pressure Israel to stop the eviction. This is the last chance for the Sumarin family.

The Canary asked the JNF to comment on the Sumarin case, but received no reply.