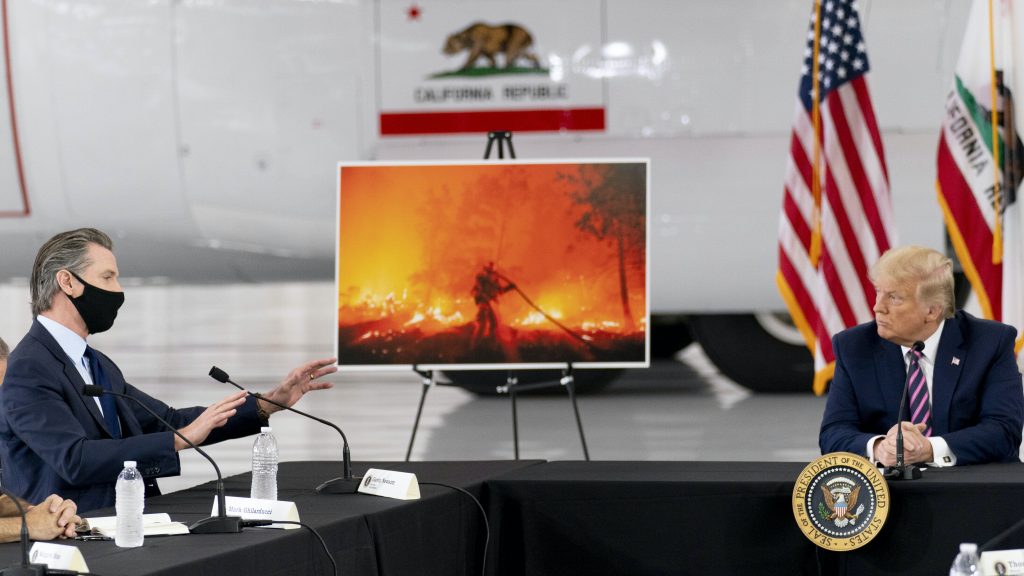 Deadly wildfires on the west coast of the US are dividing president Donald Trump and the states’ Democratic leaders over how to prevent blazes from becoming more frequent and destructive. The governors of California, Oregon, and Washington have all said global warming is priming forests for wildfires as they become hotter and drier.

During a visit on Monday to California, Trump pointed to how states manage forests and said:

It will start getting cooler, just you watch.

Scientists say wildfires are all but inevitable, and the main drivers are plants and trees drying out due to the climate castrophe and more people living closer to areas that burn. And while forest thinning and controlled burns are solutions, they have proven challenging to implement on the scale needed to combat those threats.

As crews battled wildfires that have killed at least 36 people, destroyed neighbourhoods, and enveloped the West Coast in smoke, Trump said that the states themselves are to blame for failing to rake leaves and clear dead timber from forest floors. There has been some debate in the past as to what Trump means by ‘raking’ and whether it would help. Trump previously claimed they “rake” forests in Finland to prevent fires – a country with a markedly different climate to the west coast of America.

However, many of the California blazes have roared through coastal thickets and grasslands, not forest, and some of the largest are burning on federal land. In Oregon, it was the forests that burned at unprecedented levels this past week.

Almost the same number of “megafires” – defined as having scorched 100,000 acres or more – were burning last week as have occurred during the entire last century, said Jim Gersbach, spokesman for the Oregon Department of Forestry.

Oregon governor Kate Brown on Monday asked for a Presidential Disaster Declaration, saying it would bring much needed resources to Oregon’s response and recovery efforts.

Experts, environmentalists, and loggers largely agree that thinning trees and brush through prescribed burns and careful logging will help prevent forests that cover vast tracts of the American West from threatening cities with fire. But whether that would have spared towns is less clear. Strong winds sent flames racing down the western slopes of the Cascade Range into small towns like Detroit, Oregon, wiping them out.

In a wind-driven event at 30 miles an hour, where you’ve got embers flying far ahead of the actual flame fronts and flame lengths being much greater than normal, is thinning going to really be enough to stop a home from burning in an inferno like that?

West Coast governors have blamed climate change and accused the Trump administration of downplaying the threat. California governor Gavin Newsom was tempered on Monday in his meeting with Trump, saying:

We come from a perspective, humbly, where we submit the science is in, and observed evidence is self-evident, that climate change is real and that is exacerbating this.

He also pointed out that 57% of forest land in California is controlled by the federal government.

On Friday, Newsom called out the “ideological BS” of those who deny the danger of climate change. Tens of thousands of people have fled their homes as the fast-moving flames turned neighbourhoods to nothing but charred rubble and burned-out cars.

At least 10 people have been killed in Oregon. Officials say more than 20 people are still missing, and the number of deaths is likely to rise as authorities search. In California, 24 people have died, and one person was killed in Washington state.