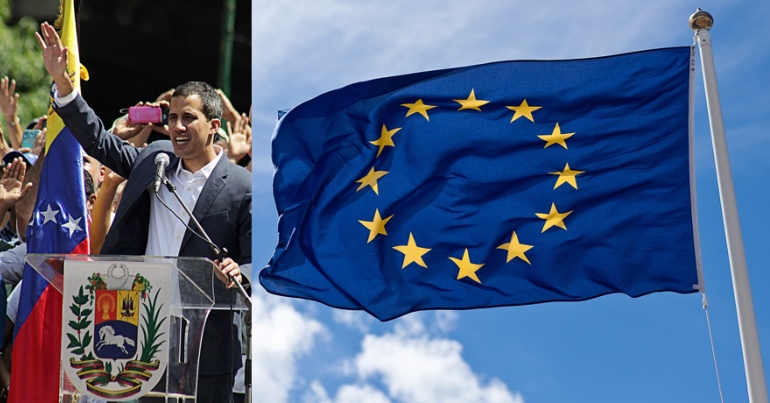 The ongoing coup attempt against the democratically-elected government of Venezuela has been on a protracted downward spiral. It’s plunging into ever more desperate and pathetic depths. Coup leaders never seized the reins of the state apparatus, nor did they succeed in getting large swathes of the military to defect to their side.

Now the European Union (EU) is no longer even recognizing the US-appointed ‘interim president’ Juan Guaidó as the country’s legitimate head of government. This surely signals a pitiful new low point for his hard-right faction’s credibility, as well as their hopes of gaining power.

But despite this, there’s one European country – a recently departed former EU member – that continues to recognize Guaidó. No prizes for guessing which it is.

On 7 January, Reuters reported that the EU “can no longer legally recognise Venezuelan opposition leader Juan Guaido as the country’s legitimate head of state”. This is because the self-appointed leader no longer holds his position as head of the National Assembly. As The Canary has previously reported, the hardline Venezuelan opposition faction to which Guaidó belongs boycotted the National Assembly election. So, since he didn’t participate in the election, he no longer even holds a seat in the legislative body, let alone its speakership.

It was this position that formed the central basis of his dubious constitutional claim to the presidency. Essentially, there are provisions in the Venezuelan constitution relating to the presidential line of succession. Two have to do with the president vacating or becoming incapable of performing his or her duties. Of course, neither of these applied since president Nicolás Maduro didn’t vacate his office, nor did he become unable to perform presidential functions.

The third relates to democratic norms. Essentially, it means that if the country experiences a breakdown in democracy, then the speaker of the National Assembly becomes the president. But this is also highly dubious, given that the claims of fraudulence in both the 2018 presidential election and this latest National Assembly election form part of a long-established three card trick from the US and its internal proxies. What happens is that the US calls on the opposition to boycott the poll. This results in a landslide for the ruling United Socialist Party of Venezuela (PSUV) and allied parties. And this is then, in turn, presented as ‘proof’ that the election was somehow illegitimate.

Moreover, now that Guaidó doesn’t have a seat in the National Assembly, he can’t even maintain this third claim to being the rightful president based on constitutional succession. Of course, we now know that his reverence for the sanctity of the Venezuelan constitution was an empty farce from the beginning. Because he’s continuing his coup attempt – and the US continues to back him – despite him no longer belonging to the National Assembly. Though the EU was foolish to begin with by believing he was acting constitutionally, it at least has the decency to follow Guaido’s own logic (however flawed it might be) to its natural conclusion.

In spite of this reversal, however, there’s one Western European country that continues to recognize Guaidó. With Boris Johnson’s government having finally ‘succeeded’ in taking the country out of the EU, the UK is supposedly now ‘free’ to set a more ‘independent’ foreign policy. And naturally enough, the UK has chosen to use this newfound ‘independence’ to continue to support the US coup attempt by backing Guaidó.

The UK continues to recognise the Venezuelan National Assembly elected in 2015 and to recognise its president as interim president, since legislative elections in December were neither free nor credible.

A sorry little outpost of US empire

This forms part of a wider irony that The Canary has alluded to in earlier articles. Namely that as much as Brexit supporters might have characterized the UK as a colony ruled from Brussels (due to EU membership), since long before the emergence of the Brexit movement the UK has, in fact, resembled far more a colony ruled from Washington.

This latest move, therefore, is an alarming early sign that Brexit will even further enmesh the UK as a proxy of US imperialism. The EU, on the other hand, for all its faults, does appear to at least be providing some counterbalance. It’s inserting a modicum of rationality into an otherwise bizarre world – one in which the twisted logic of the US’s own regime change efforts only lasts as long as it is useful.