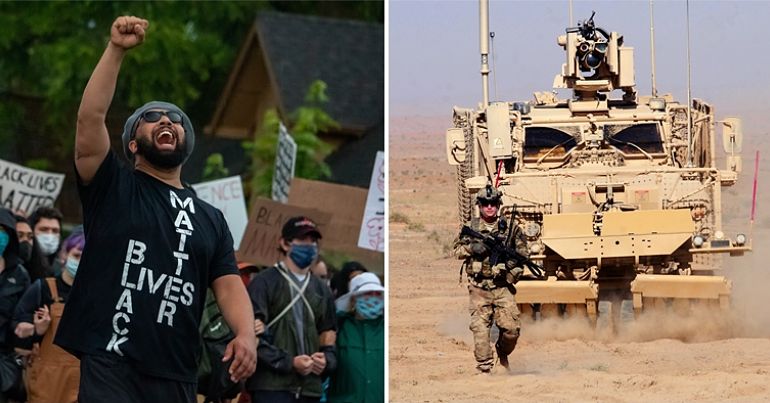 As calls intensify in the US to demilitarise the police, the Moundsville police department in West Virginia unveiled its latest acquisition on 18 June. Under the US government’s 1033 programme, this police department obtained a ‘mine-resistant ambush-protected’ light tactical vehicle (MRAP).

What’s also noteworthy about this acquisition is that Moundsville has at times had a lower than average crime rate between 2003 and 2018. Another survey ranked it as the tenth safest city in the state. Additionally, it has an estimated population of 8,252 people. And as there is a cost to the police department for this acquisition, it could strengthen the argument to defund the police.

Protests across the US

But the militarisation of the US police force is hardly new. Shane Bauer of Mother Jones reported that the US federal government supplied police departments with $5.1bn worth of equipment between 1997 and 2016. And since 2006, West Virginia has received hundreds of weapons and military equipment. It also received these weapons through the Department of Defence’s 1033 program.

Militarisation of the police and 1033

So the militarisation of the police is not a recent phenomenon. According to professor and author Alex Vitale, Robert Peel founded the police in Ireland during British occupation. Peel established this police force, according to Vitale, “to put down rural uprisings more efficiently than relying on the British Army”.

Some put the militarisation of the US police force down to the Bush administration who introduced the 1033 programme in 1990. This programme allows police forces across the US access to equipment that the military no longer needs or is surplus to requirements. According to a report to the US congress in July 2017:

Since 1991, DOD has reported transferring more than $6 billion worth of its excess controlled and noncontrolled personal property to more than 8,600 federal, state, and local law enforcement agencies through the LESO program, which is managed by DLA.

What the MRAP is meant for

This MRAP, or a variant of it, has been designed to “support the recovery efforts in Iraq and Afghanistan”. According to its manufacturer, MRAP’s are:

We can only speculate as to what “multi-hit protection” a police force in a town of around 8,000 people actually needs. And while the Moundsville police department has reportedly acquired the MRAP ‘free of charge’, surely there are more important services the public need such as healthcare:

Ever notice that when we talk about having a healthcare system where people don’t pay at the point of service, it’s “Free stuff is irresponsible & wrong!” but when it comes to raining military equip on undertrained police across the country it’s “Hey don’t worry it’s free stuff” https://t.co/RDlEqCMHuL

The Canary contacted the Moundsville police department for comment but received no reply by the time of publication.

Since the police killing of George Floyd, there have been growing calls to defund the police. Because his killing highlights that reform has so far failed. It also raises questions about the role of policing in the US and elsewhere. The Minneapolis police motto “To Protect With Courage, To Serve With Compassion” is beyond irony.