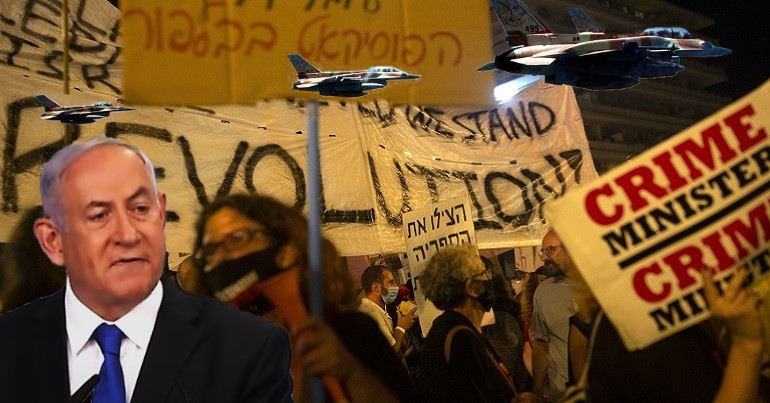 Embattled Israeli prime minister Benjamin Netanyahu has been facing pressure at home and abroad amid his government’s continued bombing of the Gaza strip. With protests in both Jerusalem and the UK, Israel’s bombardment of Gaza has continued. And the Israeli PM is refusing to back down on all fronts.

The PA news agency reported that on Saturday 22 August, thousands of protesters marched on Netanyahu’s residence in central Jerusalem. They were protesting over his continued tenure as prime minister. The demonstrations came amid a backdrop of a summer of protests, centred around Netanyahu’s government’s handling of the coronavirus (Covid-19) pandemic. But people are also angry about him continuing to hold office while on trial over corruption charges: 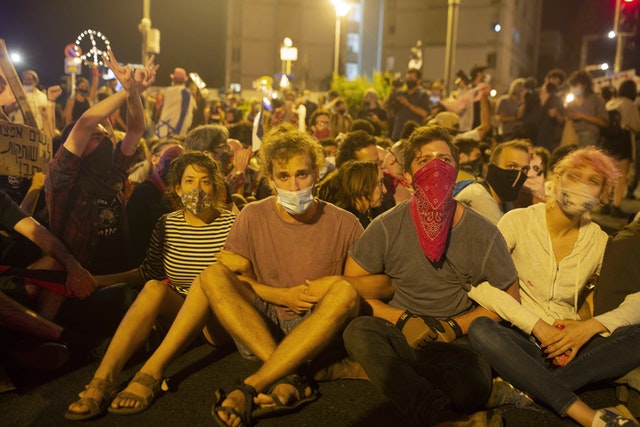 Protesters managed to reach the PM’s residence on Balfour Street. As PA reported:

Outside the residence, they hoisted giant balloons depicting smeared heads of the leader and his rival-turned-coalition partner Benny Gantz of the centrist Blue and White party, waved Israeli flags and the black flag of one of the grassroot protest movements.

A sign read ‘Balfour is in our hands’, referring to the residence address, while other signs called on Mr Netanyahu to quit and a placard described him as the ‘Crime Minister’.

Israel is facing the prospect of a fourth round of elections in the space of just over a year. This is because its ruling coalition government, so far, has been deadlocked about its forthcoming budget. The Times of Israel reported that there is a:

a tug of war between Netanyahu’s Likud party and… Gantz.

The sides have until Monday night to either pass a budget or get Knesset approval to extend the deadline by 100 days or the government will automatically fall, heralding new elections, the fourth round in under two years.

The heart of the dispute is whether the sides should pass a budget that includes 2021, as stipulated in the coalition and backed by Gantz, the defense minister, or a budget that only covers the rest of 2020, which Likud has insisted on.

Some commentators believe that Netanyahu wants another election. This is because it would stall his corruption trial. So far, the PM seems unfazed by the protests. PA reported that Netanyahu called the protests the “work of leftists and the media”. But it wasn’t just in Jerusalem that protests over him and his government were happening.

Also on 22 August, over 35 demonstrations happened up and down the UK. They were organised by the Palestine Solidarity Campaign, Campaign Against Arms Trade, and War on Want. The demos marked six years since one of Israel’s bombing campaigns against Gaza, called Operation Protective Edge, stopped. In a press release, the groups said:

The 2014 attack killed over 2,200 Palestinians in 51 days. The UN Independent Commission of Inquiry on the 2014 Gaza conflict found credible allegations that Israel committed war crimes through its indiscriminate attacks on densely populated civilian areas, which left over 100,000 Palestinians homeless.

Protesters called for an end to the two-way arms trade with Israel. Government statistics, collated by Campaign Against Arms Trade show that since 2015, the UK has licensed over £376 million worth of arms to Israel.

Many of the protests happened outside branches of HSBC bank. The groups claim this is because the bank provides financing for arms companies linked to Israel:

#GazaUnderAttack right now: We are outside HSBC in Kilburn, northwest London, calling for UK to #divestfromapartheid & #StopArmingIsrael as part of @PSCupdates day of action pic.twitter.com/zUYjjc8csS

Caroline Jones, of Campaign Against Arms Trade, said in a press release:

By arming and supporting Israeli forces, the UK government is making itself complicit in the atrocities that are being inflicted on Palestinian people. UK arms sales do not just provide military support, they also signal political support for the illegal occupation of Palestine – including the proposed immoral and illegal annexation of yet more Palestinian land, which will only inflame tensions and lead to further bloodshed. UK governments must stop putting arms sales ahead of the rights and lives of Palestinians.

But so far, this message appears to have fallen on deaf ears within the UK government. Because while protests continued in Jerusalem and the UK, Israel was still bombing Gaza – and has been almost continuously since 6 August.

Middle East Eye reported that Israeli bombing was in retaliation for Hamas launching “incendiary balloons” and “rockets” over the border. Some reports state that civilians, including children, have been injured in Gaza. Other reports state that the incendiary balloons started fires in Israel, with some residents being treated for “shock” following damage caused by an unexploded rocket.

But the Israeli bombing campaign is compounding an already fragile situation in Gaza.

As Mondoweiss reported, Israel has stopped fuel supplies from entering Gaza. The ban, effective from 19 August, has restricted the blockaded territory’s already limited fuel supply and shut down its only power plant. Some people in Gaza were saying on Sunday 23 August that they had been without power for 15 hours. But the electricity blackouts are also posing a risk to Gaza’s fragile health system while it struggles with coronavirus.

And, as is often the case, it’s children who are caught in the crossfire:

A Palestinian child whispers to his mother in fear as Israeli warplanes bomb Gaza for the 9th consecutively night.

This latest Israeli bombardment of Gaza has coincided with the United Arab Emirates (UAE) deal to normalise diplomatic relations with Israel. It was welcomed by some, but condemned by the Palestinian leadership as a “betrayal”. US president Donald Trump is trying to get other countries in the Middle East to agree similar deals, but Saudi Arabia is refusing to budge at present.

All roads lead back to the PM

Elizabeth Tsurkov wrote for the Conversationalist that the Israel-UAE deal is more about Netanyahu shoring up his precarious position than anything else. As she summed up:

The timing of the deal is linked to Netanyahu’s efforts to remain in power. Netanyahu needs any success to bolster his standing in the polls. His political survival and even his personal freedom are at stake.

So, it seems that with the protests at home and abroad, the UAE deal, and Israel’s continued bombing of Gaza, all roads lead back to Netanyahu and his desperate attempts to cling onto power. As Middle East Eye wrote:

nothing will serve him better than a small war or a Palestinian uprising to declare an early election and win as ‘Mr Security’.

Meanwhile, much of the rest of the world looks on in deafening silence, as corruption stains the Israeli government and children in Gaza are living in constant fear.