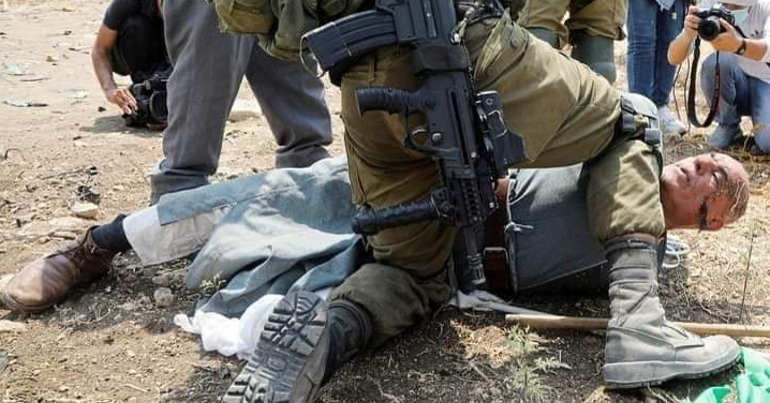 Once again, Israeli forces have been caught on camera using the brutal knee-to-neck tactic. This time it was to restrain a 68-year-old Palestinian man.

On 1 September, Khairy Hanoun was savagely attacked after a demonstration in the northern West Bank. He was protesting against the confiscation of his land. Video footage shows the occupation forces shoving Hanoun to the ground, while one soldier rams his knee into the farmer’s neck. Meanwhile, other soldiers pointed weapons at those filming the assault.

Hanoun’s land is located in Shufa village, close to Tulkarem city in the northern West Bank. Abdelkarim Dalbah, an activist and researcher from Tulkarem, told The Canary that Israel plans to confiscate around 800 dunums of land from Shufa village in order to build an industrial zone. He said:

The [Israeli occupation’s] bulldozers came two weeks ago and started bulldozing the land and making roads for the industrial zone. People were prevented from being on their land. Of course, the inhabitants started to demonstrate in order to prevent this terrible Israeli project. On Tuesday we had four demonstrations in the area. The IOF [Israeli Occupation Forces] prevented us from reaching the land. They used sound bombs and tear gas on people.

After the demonstration had finished, the Israeli soldiers followed some teenagers, so Khairy and some activists tried to talk to the soldiers to tell them not to shoot at the kids. You can see from the video what happened. We managed to release Khairy from their hands. Khairy is a great activist, and he’ll continue to demonstrate against the confiscation of his land.

Slicing up the West Bank

Dalbah explained the significance of Israel’s latest land grab plans. He said: “There’s already an Israeli industrial zone in west Tulkarem with ten Israeli chemical companies inside”. This existing industrial zone has had massive impacts on people’s health in the area. It even contains one factory which was forced to close down inside Israel’s borders because it was so hazardous.

Now they are planning this new industrial zone in south Tulkarem. If the land is confiscated it will be terrible: it is the south gate of Tulkarem city and it is the only space that the city can expand in the area. This industrial zone will connect up the [illegal Israeli colonial] settlements in this area.

In 1949, the furthest advance of the Zionist forces onto Palestinian land became known as the Green Line, separating what the mainstream media now calls Israel and the West Bank. Then, in 1967, the Israeli military crossed the Green Line, occupying the West Bank, remaining an occupation force ever since. In the early 2000s, Israel built its illegal apartheid wall. A massive 85% of the wall is placed beyond the Green Line, stealing swathes of West Bank land. The new industrial zone will steal much more land. Dalbah said:

The new industrial zone will be connected to the Green Line, cutting another Israeli corridor of land even further into the West Bank [isolating Palestinians from even more of their land].

Dalbah argued that the plans will cut off Tulkarem city from other areas of the West Bank:

It will isolate Tulkarem from the south region. Palestinian people will only be able to pass through under controls, checkpoints. Israel can claim that the industrial zone will provide work for thousands of Palestinian workers, but this is bullshit of course.

According to the UN, Israel already imposes 58 obstacles such as roadblocks or checkpoints, on the Tulkarem area, preventing free movement for Palestinian people. And there are currently 593 obstacles all over the West Bank.

Don’t forget the people of Palestine

The Canary asked Dalbah if the Israeli forces use the knee-to-neck tactic regularly on demonstrations. Dalbah replied: “Almost always.”

Israel’s brutal tactics are barely ever reported on in the mainstream media. Meanwhile, Israeli soldiers and police officers continue to get away with extreme violence, knowing that there will be no consequences. The UN has reported that there have been at least 5,585 Palestinian people killed since 2008, and another 113,990 injuries.

There have been many attempts by Israel and its supporters to smear Palestine rights campaigners as antisemitic. These attempts to shut down all criticism of the brutal Israeli occupation haven’t worked. Let’s all shout out for Palestinian rights.