Antisemitism smears are being used to silence criticism of Israel. But supporters of Palestine won't shut up. - The Canary 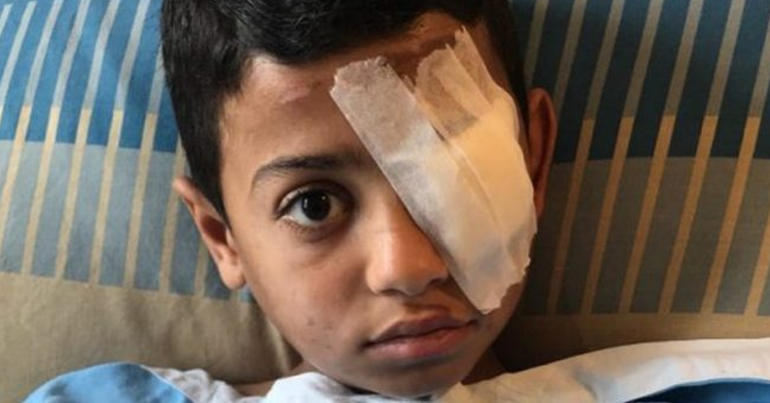 Content warning: This article contains graphic descriptions of violence that some readers may find disturbing.

An Israeli sniper is trained to target victims with absolute precision. So it’s highly unlikely that Sawalhi was shot by mistake.

Sawalhi was transferred from Gaza to the West Bank for treatment. I met him laying in hospital, without his mother. The Israeli authorities had banned her from travelling with him. Imagine how terrified he must have been, laying in that room, surrounded by strangers.

My meeting with Sawalhi will be forever etched in my memory. But there are thousands of children like him, injured by Israeli forces. At least 25,503 Palestinian boys have been injured by Israel since 2008. And there are more than 1,000 children who didn’t survive.

All the while, governments around the world look the other way. Or, even worse, like the UK, they are complicit in these murders.

The UK is complicit in the murder and displacement of Palestinians

If you’re visiting Palestine, and you tell a Palestinian person that you’re from the UK, they’ll immediately respond with the words “Balfour Declaration“. They’ll remind you of Britain’s historical role in the Zionist ethnic cleansing of Palestine.

But the UK’s role isn’t just historical. The UK government, and its mainstream media, continue to be among Israel’s strongest allies. The government attempts to shut down any criticism of Israel by loudly accusing human rights activists of antisemitism when they dare to criticise Israel or Zionism. At the same time, the UK continues to arm Israel to the teeth. After all, there are big profits to be made.

Keir Starmer’s sacking of Labour MP Rebecca Long-Bailey has caused controversy in the UK. Starmer told Long-Bailey to step down after she tweeted an interview with Maxine Peake in which Peake stated:

The tactics used by the police in America, kneeling on George Floyd’s neck…was learnt from seminars with Israeli secret services.

The interview, published in the Independent, was later amended and now states:

UPDATE (25.06.20): A previous version of this article reported that a 2016 Amnesty International report had found that hundreds of US law enforcement officials had travelled to Israel for training. Our article also implied that this training could have included neck kneeling tactics. While it is true that US law enforcement officials have travelled to Israel for training, there has been no suggestion that this training involved the tactics referred to in the article. The article has been amended accordingly.

A spokesperson for Starmer called this an “anti-Semitic conspiracy theory”. This is yet another misuse of the term ‘antisemitism’, labelling any critical mention of Israel as being antisemitic.

The Israeli police claimed that “there is no tactic or protocol that calls to put pressure on the neck or airway”. However, there is ample photo evidence showing Israeli forces using this exact technique on Palestinians:

Crazy how the same thing happens in Palestine but the world chooses to ignore it pic.twitter.com/7wddf9tUYb

And in 2019, Middle East Eye reported that the US police were being taught brutal Israeli “military-style policing tactics”.

There is plenty of documentation out there of violent arrests that involve kneeling on detainees’ heads and necks.

We have seen this not only in the occupied territories when soldiers perform arrests, but inside Israel by police officers as well.

Keir Starmer is a Zionist

But, in fact, the purge of Long-Bailey shouldn’t come as a surprise. Starmer has been labelled a Zionist by The Times Of Israel. The Israeli newspaper quoted Starmer as saying:

I do support Zionism. I absolutely support the right of Israel to exist as a homeland. My only concern is that Zionism can mean slightly different things to different people, and… to some extent it has been weaponised. I wouldn’t read too much into that. I said it loud and clear — and meant it — that I support Zionism without qualification.

Starmer also came 14th in a poll – made by Israeli PR experts Social Lite Creative – of the Top 50 Zionist Influencers of 2020.

Moreover, The Canary has previously reported that Starmer accepted a £50,000 donation from a pro-Israel lobbyist during his leadership bid.

Of course it’s possible to be a supporter of Palestinian human rights and to also be antisemitic. But being critical of Israel is not, in itself, antisemitic. And arguments like this actually dilute the term and detract from the fact that real antisemitism exists in the UK.

In 2019, The Canary’s Nancy Mendoza responded to the smear campaign against Corbyn and the Labour Party. Mendoza said:

I’m getting sick of non-Jewish people hijacking and misrepresenting my experience for their own gain. These days, that seems to be mainly for political gain against Jeremy Corbyn’s Labour Party. …

Just to be really clear: The row over antisemitism in the Labour Party is actually fuelling antisemitism, whilst simultaneously weakening the term as it’s applied to genuine antisemitism. And it seems it was never really meant to be of service to Jewish people, anyway, so nobody gives a damn what impact it has on us. That is a very frightening development, for me.

The Canary has also been accused of antisemitism, even though a number of its staff are Jewish. Canary writer and editor Emily Apple, who is Jewish, expressed her opinion:

And for me, this is where the real danger lies. Calling people antisemitic for questioning Israel creates the real problem of dismissing the rise of antisemitism; it replaces actually doing something to stop the real nastiness with a witch-hunt.

No, we won’t shut up

These constant accusations of antisemitism are an attempt to shut down all criticism of apartheid Israel. But no matter what you throw at us, supporters of Palestine won’t shut up.

To those of you who are defending the Israeli government, you’re on the wrong side of history. Future generations will look at you in horror, wondering how you could have defended such vicious apartheid. It’s time to wake up.

Featured image via the International Solidarity Movement, with permission.