Activists think stopping one coal mine is the fight of our times. This is why you should care - Canary 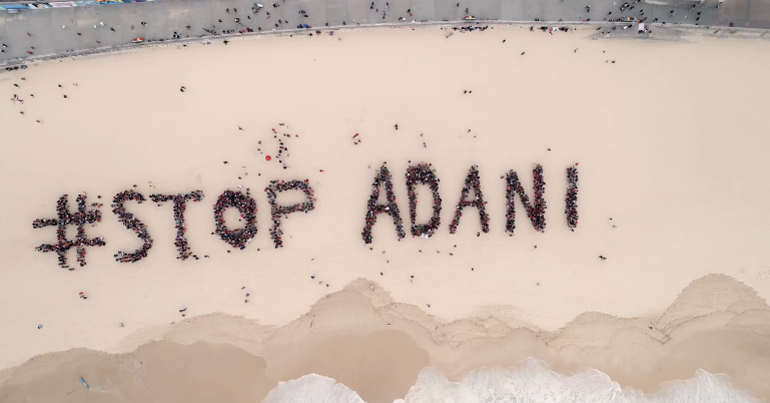 If you’re not Australian, you may not have heard of one of the most controversial coal mines in the world. The Carmichael mega-mine is set to devastate what’s left of the fragile Great Barrier Reef, as well as destroy First Nations Australians’ ancestral lands. It’s going to contribute massively to global warming, and will cause “4.6 billion tonnes of carbon pollution”.

The mining company behind the project is called Adani, an Indian corporation fraught with allegations of human rights abuses, corruption, and bribery.

In an attempt to stop the mega-mine, activists have been campaigning and carrying out direct action against Adani for the last ten years, significantly delaying the mine. Campaign group Stop Adani explains that:

Adani planned to start shipping coal out through the Great Barrier Reef in 2014 and burn it in their Indian power plants… Adani are yet to dig a single lump of Australian coal.

Because of public opposition to the mega-mine, 87 major companies, including those in insurance, banking, and engineering, have pulled out of the project, or have refused to give support to it.

Dozens of major banks have ruled out working with Adani, including the 4 big Australian banks, and all the big Chinese banks. Adani have been forced to pay for the mine themselves and have subsequently had to scale back the size of the mine.

But Adani is turning to Lloyd’s of London

Adani has found it particularly difficult to lock in an insurer, with 25 insurance companies ruling out the project. Now it has turned to Lloyd’s of London in a last-ditch attempt to get insurance. Stop Adani says:

Adani have been forced to scour the Lloyd’s of London “insurance marketplace” —  a last resort where groups of insurers meet to cobble together dodgy deals for some of the riskiest projects on earth.

So now the campaigners are putting pressure on London-headquartered Lloyd’s:

Together, our movement has already pushed several Lloyd’s insurers to rule out Adani’s dangerous coal, now it’s time for the whole marketplace to close its doors to Adani for good!

A spokesperson for Lloyds of London told The Canary:

At Lloyd’s, we take climate change extremely seriously and recognise the important role insurance is playing in supporting, accelerating and de-risking the transition to a low carbon economy.

Whilst the Lloyd’s Corporation does not set underwriting policy in the market, unless there is a specific legal or regulatory requirement to do so, we are nevertheless committed to building consensus across the 90-plus syndicates that operate at Lloyd’s to drive this transition.

This is an international issue

You might be wondering why you should be concerned by a coal mine that’s thousands of miles from your doorstep. But Adani’s mine isn’t just an Australian issue. It affects everyone.

The Indian government has cooperated with Adani to grab thousands of acres of land from villages in Jharkhand, India, to build the power station that will burn the coal imported from Australia. According to Grain Mart India:

[Adani] asked the Jharkhand government for 2000 acres of land in 10 Godda villages to build a 1,600-megawatt power plant run by imported coal from Australia. The government has so far acquired 500 acres of private land in four villages–Mali, Motia, Gangta, and Patwa.

Villagers also report that Adani has “fenced off land without their consent”, and locals have even been prosecuted for protesting the loss of their land:

People fell at the feet of the authorities, begging them not to seize their land. However, police filed criminal cases against those who protested against the takeover of land.

Jarkhand villagers have taken a case to the High Court, “demanding their land back”. They argue that they will “bear the brunt of the water contamination and pollution from the plant”.

The populations of the Indian subcontinent are already having to live among extreme levels of pollution. Every year, between December and March, parts of the region are engulfed by a giant brown blanket of toxic air pollution, known as the Asian brown cloud. According to No More Planet, the brown cloud is:

a form of atmospheric haze – containing particles of black carbon, soot, fly ash, as well as numerous toxic airborne chemicals – caused by widespread emissions from the burning of fossil fuels and biomass across the region.

Coal is the world’s biggest contributor to global warming, and the Adani mine will contribute massively to climate change. According to Stop Adani:

Air pollution kills an estimated 3 million people globally each year, with the burning of coal a key contributor.

The Canary contacted Adani for comment but had not received a reply at the time of publication.

Back in Australia, teenagers are taking legal action in an attempt to stop the Adani mine. They’re attempting to get the government’s environmental approval for the project revoked. The teenagers argue that the mine will destroy the Great Barrier Reef.

The reef is the most damaged it’s ever been in its history. According to a new report, more than half of its corals are dead. All 2,300km of the reef was damaged by severe bleaching in 2020 – the third bleaching incident within five years. Scientists argue that rising ocean temperatures and climate change are to blame. We are told that if we don’t act now, we will lose the reef for forever. So it’s nonsensical that Adani should still be allowed to go ahead and obliterate the “largest living structure on earth“.

According to the Scripps Institute of Oceanography:

Healthy coral reefs are among the most biologically diverse and economically valuable ecosystems on earth, providing valuable and vital ecosystem services. Coral ecosystems are a source of food for millions; protect coastlines from storms and erosion; provide habitat, spawning and nursery grounds for economically important fish species; provide jobs and income to local economies from fishing, recreation, and tourism; are a source of new medicines, and are hotspots of marine biodiversity.

You can take action

There’s a number of ways that you can take action against Adani and its Australian coal mine, including putting pressure on Lloyd’s of London’s marketplace not to provide insurance for the project. As we witness the effects of global capitalism around the world, from floods to bush fires, we know that time has run out. But we can’t afford to do nothing. Join the fight against Adani.