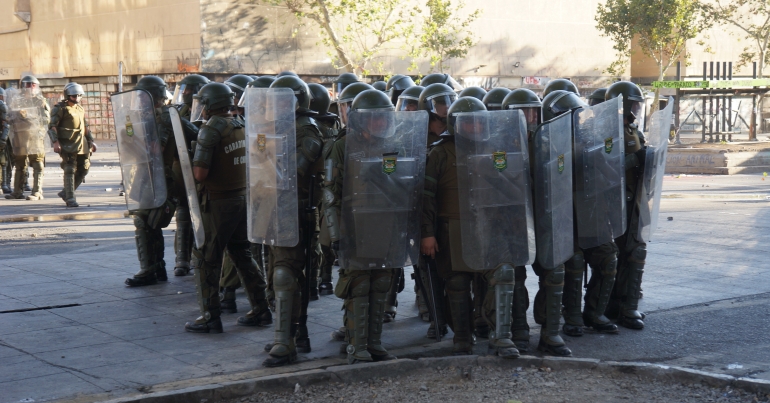 Chile’s militarised police force carabineros shot a street juggler in the Chilean southern town of Panguipulli on Friday 5 February 2021, to the horror of onlookers.

Francisco Martínez Romero was approached by police who asked him for his ID card. When he resisted, he was shot. The police did not go to the young man’s aid. Instead, they retreated, leaving the crowd to deal with the aftermath.

Angry local people protested the killing of Martinez who was well known in the community. Several fires broke out, one of which destroyed the council building of Pangipulli.

The shooting and killing of a young street performer by the police at the weekend is yet another example of the excessive and brutal force used by the governments security forces. To claim ‘self-defence’ due to the props that Francisco was using, is a stark reminder of the complete disregard the Chilean state has towards it owns citizens. The police force in Chile is not fit for purpose and needs to be reformed immediately.

This latest act of brutality has been met with fury by a people that have been subjected to extreme violence by a police force inherited from the US backed Pinochet regime. Riots and protests have also broken out in large cities like Concepcion and the capital Santiago, with the funeral delegation being attacked by police who used tear gas to break up the crowd.

Police cannot kill someone for resisting an ID check.

A thorough and rapid investigation into these serious events is urgently needed. Chile must urgently move forward with a serious and rigorous reform of the Carabineros.

The Chilean Communist party also made a statement rejecting the “criminal and abusive use of procedures”. Prensa Latina reported that:

It also rejects the ‘criminal and abusive use of procedures’ that go beyond the basic standards of a police force, whose actions threaten the daily lives of people, whose rights, such as the use of public roads or work, are threatened for fear of being repressed, beaten, arrested, abused or killed.

Since the start of the social upheaval that began in October 2019, when students staged a protest over escalating metro fares that erupted into nationwide mobilisations demanding change, Chile’s security forces have been implicated in the rape, torture, and even the killing of anti-neoliberal, feminist and environmental protesters.