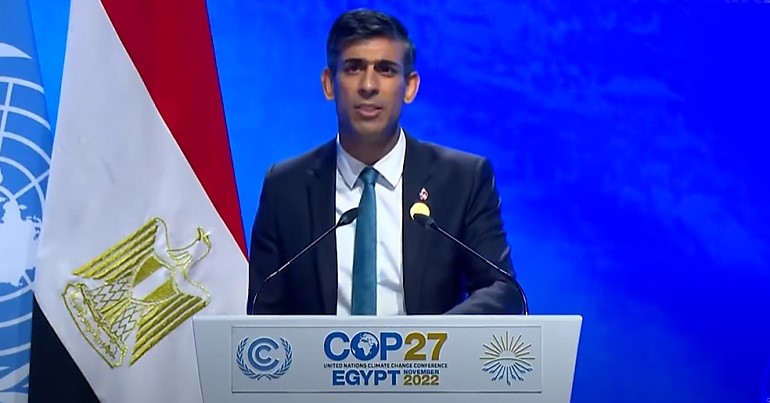 Campaign group Global Justice Now has branded Rishi Sunak’s COP27 speech as “tepid” and “underwhelming”. Little wonder, really – the UK PM did little more than rehash old policies in an attempt to look interested in the climate and ecological catastrophe.

Sunak: couldn’t be arsed with COP27

You can read Sunak’s full, insipid speech here – not that you probably want to. It was the usual spin on what the UK government is doing about the climate crisis, and how successful COP26 in Glasgow was. Sunak mentioned a fund for poorer countries to deal with the causes of the climate crisis. He said:

I can tell you today … that the United Kingdom is delivering on our commitment of £11.6 billion [for this fund].

This isn’t his policy  – it was Boris Johnson’s from 2019. Plus, Sunak’s additional £1.5bn to help poorer countries is a tiny amount of money. To put it into context, this is just 0.5% of the amount of money Sunak’s predecessor Liz Truss wiped off the value of the stock markets in her first month as PM.

If anything, Sunak has downgraded the UK’s approach to the climate crisis – if that’s possible. For example, as Politico reported, under Johnson:

there were two [government Cabinet committees] dedicated to climate

However, enter Sunak, and

now net zero has been rolled into a committee on “domestic and economic affairs” with a focus on energy security.

All this from the PM who wasn’t going to attend COP27 in the first place. Naturally, campaign groups are unimpressed.

Sunak’s tepid words today have failed to address the scale of the climate emergency. His underwhelming funding pledge falls a long way short of the UK’s fair share of climate finance. The UK needs to start taking the escalating cost of climate disasters in lower-income countries seriously – and introduce a polluter’s tax on the fossil fuel industry to pay for it.

Rich countries taking responsibility for their role in causing the climate crisis is key to unlocking the global emissions reductions that can solve it. The Prime Minister must recognise that the UK owes the countries facing the first and worst impacts of climate change a heavy debt. Otherwise, it will be yet more bluster and no action.

The group’s words echo those of others. Greenpeace said the UK government should:

clean up its climate record at home by immediately ending all new fossil fuel projects, investing in home insulation, and strengthening the Environment Act to ban all deforestation in supply chains.

So, maybe Sunak should have stuck to his guns and not attended COP27 in the first place – given his half-baked and vacuous speech, there was little point in him being there anyway.