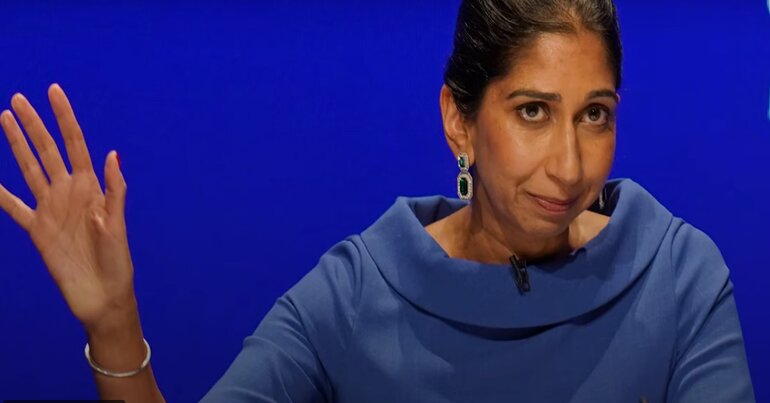 This piece was updated at 16:45 on 9 November to clarify that the donations were made to the Legatum Institute and that this organisation is a think tank.

During her failed bid to become Tory leader, Suella Braverman received funding linked to the former chair of a climate change denying think tank. Now, three MPs are demanding the wider finances of that think tank – based at the prestigious Westminster address of 55 Tufton Street – be investigated. This news may prove embarrassing for the government, coming as it is during COP27 week.

The investigation could potentially end up as a test case for other groups – collectively nicknamed the Tufton network – based at, or associated with, that address. Several senior Tory MPs work closely with those groups. Many of them are also listed as current or past members of the European Research Group (ERG).

Representing a cross-party trio of MPs, the Good Law Project has asked the Charity Commission to investigate alleged wrongdoing by the Global Warming Policy Foundation (GWPF). The thinktank is a registered charity that rejects climate change.

An 18 page letter sent to the Charity Commission, alleging “mismanagement” by GWPF, is available to view here.

several hundred thousand pounds’ worth of spending on one-sided and politically-motivated research, which does not fall properly within the “educational” purposes of the Charity.

A company owned by former GWPF chair Terence Mordaunt donated £10k to Suella Braverman for her bid as Tory leader. Mordaunt is also a trustee of the similarly named GWP Forum, a subsidiary of GWPF.

So who are the the Tufton network?

In October, Led By Donkeys (LBD) posted a video identifying the groups who make up the Tufton network. They include: TaxPayers’ Alliance (TPA), Centre for Policy Studies (CPS), the Adam Smith Institute (ASI), and Institute of Economic Affairs (IEA). LBD also named individuals from these groups who worked closely with Liz Truss during her short tenure as prime minister. They include Matthew Sinclair and Alex Wild (TPA), Caroline Elsom (CPS), Ruth Porter (IEA), and Julian Jessop (IEA).

According to LBD, the IEA reportedly received funds from BP and ExxonMobil. LBD adds that the tobacco industry funds the IEA, the CPS, and ASI.

Independent media sites in particular have exposed other funding sources for the Tufton network:

Tufton network and the Tories

The pro-privatisation and climate change denying CPS has long-standing links with the Tory right. It was set up by Margaret Thatcher, along with Keith Joseph and Alfred Sherman. Wikispooks lists CPS directors and council members, the latter of which include several Tory MPs. The CPS’s advisory board also includes, among others, Graham Brady who is chair of the highly influential 1922 Committee of Tory MPs.

It’s further revealed by openDemocracy that:

Then there’s Tim Montgomerie, senior fellow at the Legatum Institute and “creator of the ConservativeHome website”. Following the disastrous Kwasi Kwarteng budget, openDemocracy reported that Montgomerie, who was also a former adviser to Boris Johnson:

wrote on Twitter that the mini-budget was a “massive moment for the IEA”. “They’ve been advocating these policies for years,” he said.

These groups “are the government”

She was groomed by dark-money lobby groups working for Big Tobacco, Big Oil and foreign oligarchs. Now Liz Truss is in office and trashing this country on their behalf. pic.twitter.com/vFkobN8euo

Monbiot suggests that the lobby groups he mentioned are “no longer lobbying government – they are the government”.

He points out that their policies also include: no tax for the rich, deregulation of industries, and the abolition of trade unions and protest movements. He argues that these groups promote fundamentalist policies that would see massive cuts in services, leading to the privatisation of public services, including the NHS.

Meanwhile, we await a response from the Charity Commission to the Good Law Project’s request for an investigation into GWPF finances.

As for the wider Tufton network, their links with Tory-run government are expansive if not endemic. Indeed, to borrow a phrase from the Thatcher era, they could be described as the “enemy within”.