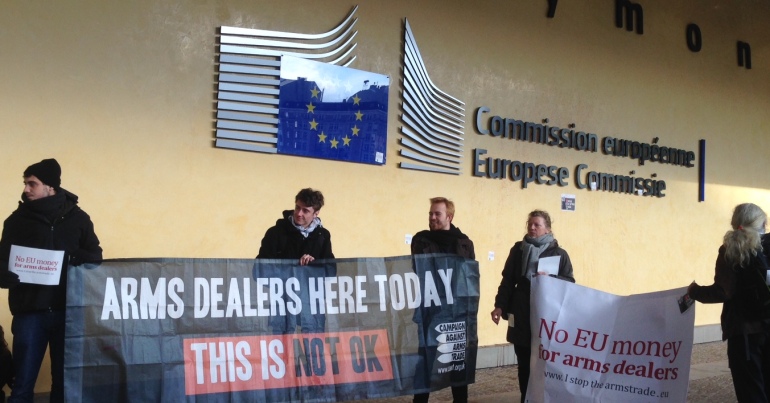 On 12 December, the European parliament approved €13bn of funding which will be “channeled to the military industry”, according to a press release from Campaign Against Arms Trade (CAAT).

The parliament’s Committee on Industry, Research and Energy (ITRE) approved the funding via a proposal for the European Defence Fund. The initial proposal was developed by an advisory group comprising mostly of arms companies and private research groups.

Six of these companies have reportedly already benefited from the proposal’s pilot phase. Bram Vranken, from the Belgian group Vredesactie (Peace Action), said that “this raises serious concerns about a conflict of interests”.

Campaigners have criticised the move, which they say sets a precedent for Europe providing funding for military projects. In November, 42 campaign groups from across Europe issued a joint statement expressing their opposition to the fund.

This sets a very negative precedent and will see billions of pounds more of public money being used to subsidise arms companies. The European Union was envisaged as a peaceful project, it should be investing in jobs and research projects that promote sustainable industries and contribute to the prevention of conflicts. Whatever your views on Brexit and the UK’s role in Europe, it should not be using public money to fund research for companies that profit from war.

The European Network Against Arms Trade has previously expressed concerns about the European Defence Fund, saying it could “exacerbate the global arms race”. The fund will also allow companies to develop what are known as “disruptive technologies”, which would reportedly include artificial intelligence and killer robots.

CAAT insists that channeling funds into the development and trade of weapons and other combat technologies also undermines the EU’s mission to “bring peace to Europe”.