After a chaotic week, Theresa May's now so rattled she's even attacking The Daily Mail - The Canary 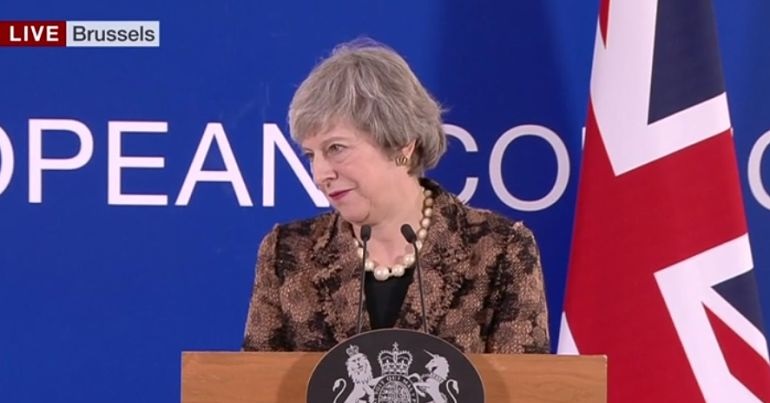 It’s been a tough week for Theresa May. Her Brexit deal appears to be dead in the water. And although she survived a confidence vote, it revealed how little support she has among her backbenchers. Now the cracks are beginning to show.

May held a brief press conference on 14 December. In it, she put a rose-coloured spin on her catastrophic Brussels trip to persuade EU leaders to alter the deal. But during the appearance, she also managed to insult one of the few remaining publications that continues to support her, the Daily Mail.

The Daily Mail‘s Jason Groves asked May a question at the conference.

He began by saying:

You look like you’ve had a fine week. What’s been worse…

May smiled and interrupted him at this point, asking:

Has something happened this week, Jason?

Clearly, May thought laughter was the best medicine at this point. Or perhaps her week has been so bad, she’s actually erased it from her memory in an act of self-preservation. Regardless, Groves tried to remind her of what has gone on. He said, “well, I’ve read reports”. To this, May responded:

Oh, you shouldn’t believe everything you read in the newspapers.

Of course, the Daily Mail is a newspaper. In fact, it’s one of the only newspapers that positively reported on the result of her confidence vote. It ran a story with the headline:

Now let her get on with the job!

So, May just essentially ‘joked’ that she has no confidence in the Daily Mail – or other newspapers – after it put its support behind her.

Following this exchange, Groves asked May if she had:

ever felt like just throwing your phone in the bin, moving to a remote island, and letting someone else sort this mess out?

No doubt at that moment the idea of “moving to a remote island” sounded pretty damn fine to the PM. After all, she had just insulted a major player in her rapidly diminishing power base.