15-year-old activist shames our 'adult' politicians over climate chaos, right in front of the UN - Canary 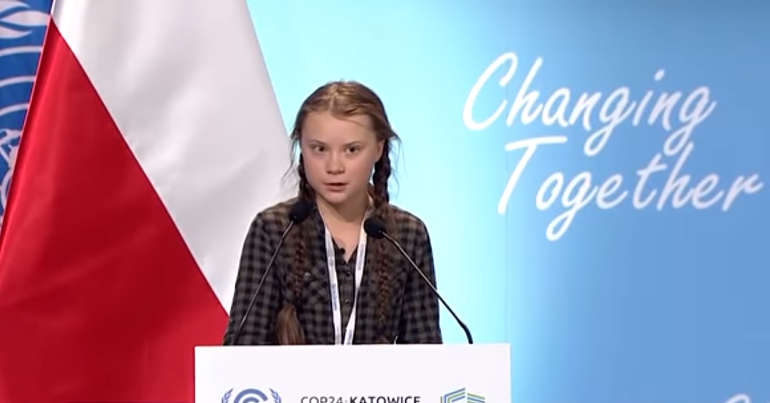 One of the “most influential teens of 2018”, Greta Thunberg, addressed the UN for the second time to shame political leaders on climate policy this week.

Since Thunberg first walked out of her school in Sweden to protest climate breakdown over four months ago, students across the globe have been following suit.

And as the UN climate conference drew to a close this week, Thunberg travelled from Sweden to Poland by electric car to make a powerful speech:

World leaders are “behaving like children”, she previously claimed. And in the speech above, she insisted:

You only speak of green eternal economic growth because you are too scared of being unpopular… You are not mature enough to tell it like it is. Even that burden, you leave to us children.

Thunberg thus nailed a crucial yet rarely mentioned environmental truth: the economic necessities of consumer capitalism are simply incompatible with solving our climate crisis. She continued with a killer punch:

If solutions within this system are so impossible to find, then maybe we should change the system itself.

And in an all-round moving speech, this quote stands out:

The year 2078, I will celebrate my 75th birthday. If I have children, maybe they will spend that day with me. Maybe they will ask me about you. Maybe they will ask why you didn’t do anything while there still was time to act. You say you love your children above all else, yet you are stealing their future in front of their very eyes.

This is what the truth sounds like. Every single line of @GretaThunberg's speech is devastating. #ClimateBreakdown #ClimateStrike #ExtinctionRebellion
Our media alert this week:
'Veneration Of Power Leading To Climate Catastrophe'https://t.co/6gVGvypBb3 https://t.co/7QRZBQ4WZJ

And according to author and environmentalist Bill McKibben, Thunberg has “set something big in motion”:

Schoolkids on #ClimateStrike in Zurich this morning. @GretaThunberg has set something big in motion, and I bet we'll see similar actions many times in the months ahead https://t.co/fJMBxHKNFJ

.@NaomiAKlein supports @GretaThunberg’s call to go on #ClimateStrike this Friday for the last day of #COP24 – This is what climate leadership looks like! pic.twitter.com/6ZeLnG8XsH

The true thieves of our children’s future revealed themselves at the summit, with the US joining Russia, Kuwait, and Saudi Arabia in blocking endorsement of the Intergovernmental Panel on Climate Change’s landmark climate report. The US state department said:

The United States was willing to note the report… but not welcome it, as that would denote endorsement of the report.

According to Alden Mayer of the Union of Concerned Scientists:

The fact that a group of four countries were trying to diminish the value and importance of a scientific report themselves, with all other countries, requested three years ago in Paris is pretty remarkable.

“We have run out of excuses, and we are running out of time,” Thunberg told the UN. She’s right: young people must reclaim the future that is being stolen from them. And we must all stand alongside them in that struggle.