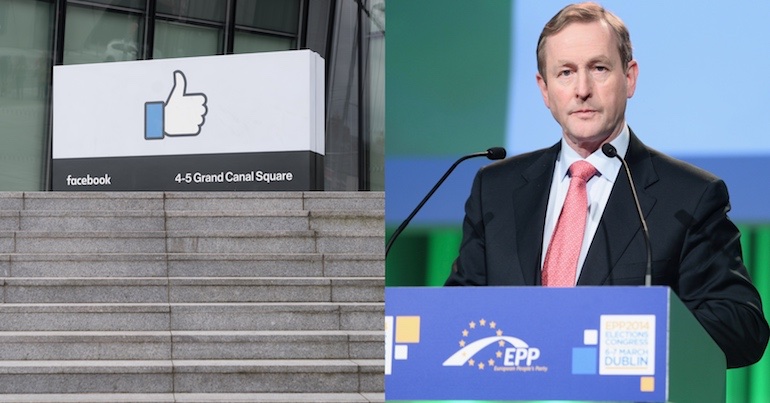 A leaked memo from 2013 shows that a former Irish prime minister offered to lobby for Facebook in Europe. At the time, Enda Kenny was the prime minister of Ireland. As Carole Cadwalladr wrote in the Guardian, Kenny suggested he would try to influence European politicians on Facebook’s behalf. In 2013, Ireland held the presidency of the European Union. Ireland, the memo says, therefore had the “opportunity to influence the European Data Directive decisions”. Facebook, which has its European headquarters in Dublin, also described Kenny as one of its “friends”.

The report in the Guardian says Facebook worried about “overly prescriptive new laws” regarding data protection and privacy in Europe. Kenny, it states, offered to use Ireland’s “significant influence” to lobby for the corporation. But the memo also pointed out that “Ireland is supposed to remain neutral” while it holds the EU presidency.

The document includes extraordinary claims that the Irish prime minister @EndaKennyTD said his country could exercise significant influence as president of the EU, promoting Facebook’s interests even though technically it was supposed to remain neutral.https://t.co/zSxRen1saz

Digital Rights Ireland spoke to The Canary and said:

It would be significant if anybody could prove anything actually happened as a result of this.

The Irish Council for Civil Liberties (ICCL) also spoke to The Canary. It said the report creates “serious concerns”. The ICCL said the memo and other Facebook scandals:

underline the need for Ireland to strengthen our lobbying and transparency regulations especially as they apply to large commercial interests.

Governments should keep relationships with large corporate interests formal and transparent in order to avoid conflict of interest or actions that harm democratic functioning.

Social media, according to the ICCL, is the “primary vehicle” for political organising for many people. As a result:

Facebook, along with other multinational corporations, has benefitted from Ireland’s low rate of corporation tax. This has been widely criticised. For example, Facebook’s Irish branch paid taxes of €38.3m to the Irish government in 2017. It also made a profit of €251m in the same year.

And more recently, there has been a move by the European Commission to change this tax level. It wants to introduce a common level of corporation tax across the European Union.

Kenny has so far made no comment about the memo.