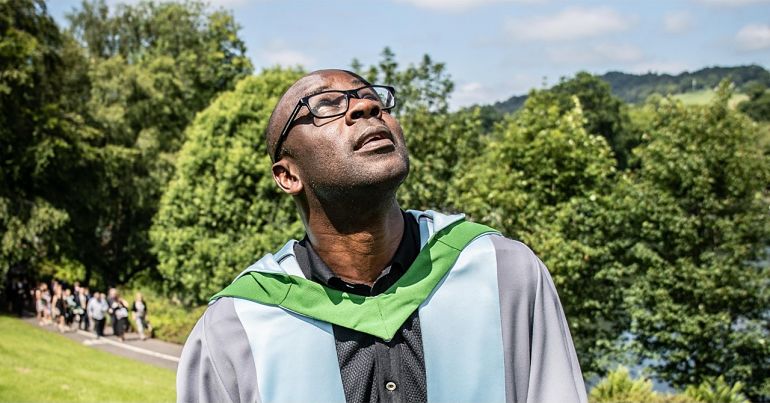 World Cup winner Lilian Thuram urged graduates to “put solidarity at the heart of our society” as he received an honorary degree.

The former France defender said he feared the rise of right-wing ideology across Europe and increased focus on competition would lead to people becoming isolated.

He was at the University of Stirling on Wednesday to be recognised for his contribution to football, as well as his commitment to tackling racism through education.

In 2008, at the end of his football career, the former defender – a Unicef ambassador – set up the Lilian Thuram Foundation, which educates against racism and promotes equality.

Speaking via a translator, he said: “I’m very proud of it, it’s an acknowledgement of the work we are doing at the foundation.

“I was very surprised when I received the invite because I didn’t know the work we are doing was used at the university, so I’m very proud indeed.”

He added: “What is very important is not to forget the importance of solidarity and to put solidarity at the heart of our society, because we are living in a society where competition is more and more prominent and if we continue like that we are going to end up being alone.

“The aim of our work is to tell everybody – especially children – things like racism (and) homophobia are social constructs and there’s nothing natural about feeling those things.

“It’s the same when you see the difference between men and women, it’s totally a construct of the society we are living in.”

Thuram played for Barcelona, Juventus, Monaco and Parma during a 27-year career.

The 47-year-old described the growth of right-wing ideology across Europe as worrying but said it was telling the “history of the Western world”.

He added: “We have always felt we are superior and maybe we should ask the question if we should share more the wealth in the world or do we think we are entitled to that?”

Thuram was at the university as students were presented with their degrees at summer graduation ceremonies.