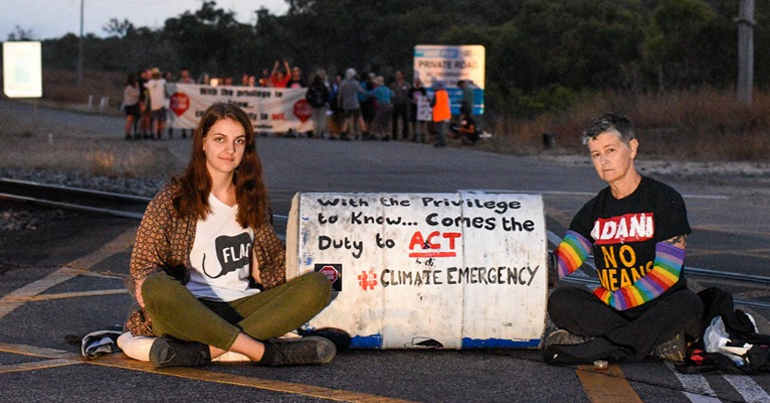 In recent years ecological activists in Australia have united behind a campaign to stop a multinational company from digging one of the world’s largest coal mines which they say will ‘wreck’ the Great Barrier Reef. Indian company Adani has been trying in vain to get the project off the ground for years.

The Carmichael mine will further undermine First Nations peoples’ rights to their land. It will also emit “an estimated 4.64 gigatonnes of CO2 over 60 years”. These emissions will have major impacts on the global climate.

The coal extracted from the Carmichael mine in Australia’s Galilee Basin will be transported to the Queensland coast by train before being exported by ship. The increased shipping traffic and associated pollution will further threaten the Great Barrier Reef.

‘Stand with us on the frontlines’

In August 2019, Adani began clearing trees at the planned mine site in central Queensland. Campaign group Frontline Action on Coal (FLAC) called for people to come to stand with it “on the frontlines” and take direct action against the company:

A FLAC spokesperson told The Canary:

After issuing the red alert, the Blockade Adani frontlines have had hundreds of people respond and take part in blockading both works on and around the mine site as well as blockading contractors who have agreed to help Adani push forward with this project.

But FLAC says that it still needs support:

There are still many hectares of trees being cut down and there are still contractors entering into business relationships with Adani so we really need to cause disruption to these works so this project can finally be put to bed.

It is shameful that our governments are giving Adani extra support to get their destructive mine up and running but at the same time extinguishing native title for Wangan & Jagalingou traditional owners.

Targeting the international web of companies supporting the project

Campaigners opposed to the project have been calling for action against the companies involved in all aspects of the project. This means Adani themselves, the international companies financing the project, and those providing the infrastructure.

The Canary asked what people can do to support the campaign from outside Australia. A spokesperson for FLAC said:

There are definitely some ways that people outside of Australia can help in stopping the Adani mine from going ahead. As there are many contractors who are involved in the Adani project who have international offices and hubs, there are opportunities for people to take part in non-violent direct action against these businesses to show that their business relationships extend further than what happens within their political boundaries.

Putting the pressure on contractors by giving them a call and emailing them is another method that can be used by people who are currently overseas.

According to a report by Greenpeace, the opening up of the Galilee Basin to coal mining, where the Carmichael mine is based, is among 14 global mega projects which, if they all go ahead, will trigger a ‘carbon bomb’ that would cause global temperatures to rise by 5-6 degrees.

FLAC explained to The Canary why resisting the Adani project is globally significant:

The Adani project will have significant environmental consequences worldwide if it goes ahead. Our atmosphere has no barriers. The coal that is extracted from the ground in Australia, and is burned overseas, means that all who assist in the coals extraction have contributed to the climate catastrophe we are in through assisting in the rise in greenhouse gas emissions.

The opening of the Galilee Basin, where Adani’s mine is set to be built, will also lead to numerous more coal projects being given the tick of approval. This means that the Adani project will cause somewhat of a chain reaction of more coal being extracted and burned, for the entire world to be impacted by.