'The fight goes on' over state pension age changes, as campaigners urge parliament to intervene - Canary 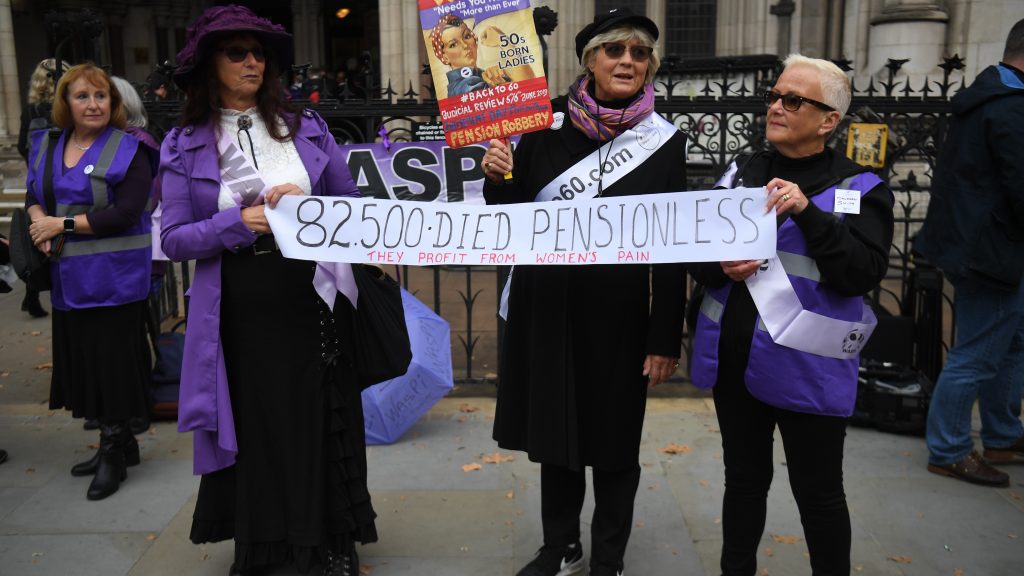 Women affected by controversial changes to the state pension age have called on parliament to intervene after they lost their landmark High Court fight.

Nearly four million women born in the 1950s have been affected by the changes, introduced by successive governments in an attempt to ensure “pension age equalisation”, which have raised the state pension age from 60 to 66.

Julie Delve, 61, and Karen Glynn, 63 – supported by campaign group Backto60 – took the Department for Work and Pensions (DWP) to court, arguing that raising their pension age unlawfully discriminated against them on the grounds of age and sex, and that they were not given adequate notice of the changes.

But giving judgment on Thursday, Lord Justice Irwin and Mrs Justice Whipple dismissed the claim “on all grounds”.

There were some disappointed gasps in the packed courtroom at the Royal Courts of Justice in London as the decision was announced.

In their ruling, the judges stated: “We are saddened by the stories we read in the evidence lodged by the claimants. But our role as judges in this case is limited.

“The wider issues raised by the claimants, about whether these choices were right or wrong or good or bad, are not for us; they are for members of the public and their elected representatives.”

“The fight goes on”

Joanne Welch, from the Backto60 campaign, said outside the Royal Courts of Justice: “Where do we go from here? Well, where will the Government go from here is the better question.”

She referred to prime minister Boris Johnson’s pledge during the Tory leadership campaign to look at the state pension age issue with “fresh vigour”, adding: “We will be holding you to that undertaking.”

She said: “MPs and Parliament have allowed this issue to languish for so many years with false promises about what they are going to do.

“We are hoping now that, given the judiciary have said that Parliament must look at this … that they will do that because women are suffering.”

As Welch finished her brief statement, supporters chanted: “The fight goes on.”

I’m sorry to hear the women state pension age legal case today has been lost. The campaign for #WASPI continues. Us girls know our history and none of the women’s rights that have been fought and gained throughout history have ever come easy to us.

Solidarity with the #WASPI and #BackTo60
women.

This struggle for pension justice won't stop. It may take a change in govt, but there's no question that in the 5th biggest economy in the world, women (and men) should be entitled to a secure pension at 60.https://t.co/MwFfJ892Az

This ruling is disappointing, but the campaign for justice for 1950s women continues. The UK Gov must do a full impact assessment on the disadvantage caused.

Once that assessment has been completed, a payment acknowledging that disadvantage should be made to all WASPI women. https://t.co/6mQ82ICQc6

Disappointed to hear about today's decision regarding the #WASPI women. I will continue to support the @Waspi_campaign in their fight against pension inequality. pic.twitter.com/N3hLiM1K7M

Giving a statement after the ruling, Marcia Willis Stewart, of Birnberg Peirce, which represented the claimants, said: “We are deeply disappointed by this decision.”

She said the aim of the “arduous legal process” was “to rectify a substantial and far-reaching injustice”, adding: “Sadly, today that injustice remains. The struggling on behalf of those beleaguered women, whose stories saddened the judges but for whom this judgment provided no relief, will continue.”

Willis Stewart concluded: “We will meet with our legal team to consider the detailed reasons contained in the judgment in order to see how to progress these pressing issues further.”

Unison union general secretary Dave Prentis described the decision as “a terrible blow for the millions of women who will have been hoping for a very different outcome today”.