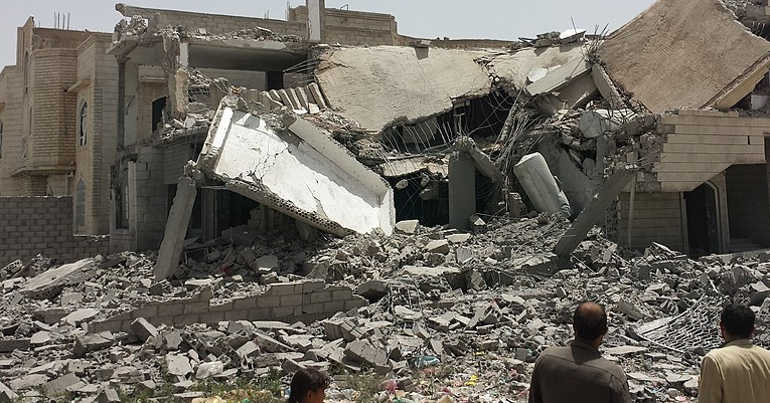 Brighton arms company EDO MBM has come under intense criticism after a UN report revealed that it manufactured weapons components used in a 2016 Saudi attack on Yemen that ‘violated international humanitarian law’. And now, 33 Brighton and Hove councillors, along with local Labour MP Lloyd Russell-Moyle, have written to defence secretary Ben Wallace.

As you will know, the targeting of civilian infrastructure that has no dual use for military purpose is a war crime.

We are therefore extremely concerned that the Government has issued a licence for a weapon that has been used illegally.

The letter was signed by Green, Labour, and Conservative councillors. And it goes on to request that the government suspend the issuing of export licenses to EDO MBM:

We therefore call on you to suspend all extant licences (OIELs) which EDO MBM and other companies used in this case and fully investigate this matter.

If the information is found to be correct, we request that you revoke licenses used by EDO MBM and its partners to sell weapons parts and arms.

The initiative for writing the joint letter came from Labour council leader Nancy Platts, who has previously said:

I wish that the EDO MBM factory was not based in Brighton or anywhere in the UK for that matter as I am personally opposed to the UK arms trade, however that is outside our powers as a local authority.

Andrew Smith of Campaign Against Arms Trade told The Canary:

The terrible war in Yemen has been made possible by arms companies like EDO, who have consistently put their profits ahead of the rights and lives of people in Yemen. All of the evidence suggests that these weapons have been used in air strikes that have hit civillian targets and violated international humanitarian law. Brighton Council is right to take a stand against this, now it is time for the Government to act by ending its uncritical political support for the Saudi regime and the crisis it has inflicted on Yemen.

The current anger about Brighton’s EDO MBM factory comes after over 15 years of protests and direct action by residents of Brighton calling for the factory to be closed. EDO MBM, which is owned by L3 Harris, doesn’t only supply weapons to Saudi Arabia. It also sells weapons to the US and UK armed forces, as well as applying to export arms to Turkey.

In 2009, activists broke into the EDO MBM factory, destroying computers and machinery. They were later acquitted because they had acted with the intention of preventing war crimes being carried out by the Israeli military in Gaza with the help of EDO MBM’s equipment.

Brighton Against the Arms Trade (BAAT) has called on the council to revoke a recent planning application for an extension of the EDO MBM factory. A council spokesperson has maintained that the council is “unable to reverse a planning decision”.

A BAAT member told The Canary that a broad coalition of groups are now working together to campaign against EDO MBM. This coalition includes Brighton Against Borders, Brighton Kurdistan Solidarity, Brighton and Hove Labour Left Alliance, Brighton Quakers, Brighton and Hove Amnesty, Sussex University Climate Justice Network, and the Women’s International League for Peace and Freedom

Plans are underway for a demonstration outside EDO MBM’s factory in Brighton on 6 November.