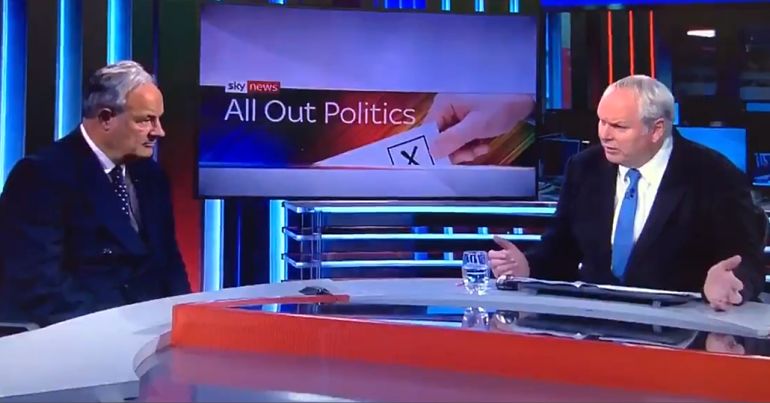 With Boris Johnson’s proposals for the border in Ireland receiving at best a lukewarm response, various minions have been despatched to the news studios to try and talk them up.

James Gray is the Conservative MP for North Wiltshire. He appeared on Sky News’s All Out Politics, and host Adam Boulton asked him who would benefit from the new proposals:

Gray’s response rather flew in the face of pre-Brexit reality. He said: “Well you face borders if you do trade around the world wherever that might be”. Boulton reminded him: “Well you don’t at the moment between north and south”. Gray ploughed on:

No really, who wins?

Boulton again made the point that people living in the north of Ireland would have two borders to deal with. Gray deflected this by saying that the north would have the opportunity to review the arrangements every four years. But then he made a rather extraordinary statement:

No deal in this world happens without some pain for some people.

Boulton let him go on for a bit as Gray gushed about Johnson pulling “a very significant iron out of the fire”. But then the presenter hit his guest with a stark summary of what he’d said:

So Northern Ireland is collateral damage in this?

Gray denied he’d said anything of the sort, but the point was made.

James Gray MP: Pass the deal and we’ll be free.

Boulton: Not the people of NI, as they’re going to have two borders.

G: No deal in this world happens without some pain for some people.

B: So NI is collateral damage in this? pic.twitter.com/iJzNIQBTdp

People living in the north of Ireland made their views known:

I live in NI, so my blood is worth spilling to satisfy Brexiteer's self-interest and the irrational views of a minority? Unbelievable.

I'm from NI, my family voted leave, they are unionists. Its ironic that they & many others at home helped the tories get their pet project over the line and will now be sold down the river. I think unionists at home are finally realising that the tories only cared when it suited

Another respondent took issue with Gray’s central claim about ‘freedom’:

God I am bored with being told how *free* we will be when Utopian Brexit happens; at present we live in one of the most liberal of communities in the world, we ARE free, and being part of Europe helped that

Gray’s comments suggest a mindset so fixated on ‘getting Brexit done’ that causing “some pain for some people” is perfectly acceptable. It really is, as Boulton described, “collateral damage”.

It’s clear that the Tories have lost the plot and need to be stopped.