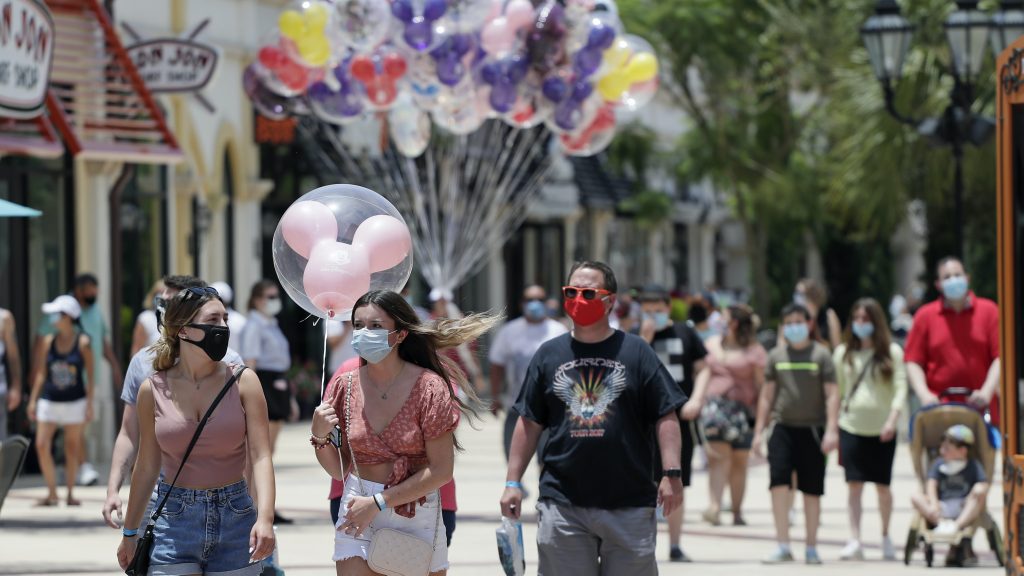 “The Most Magical Place on Earth” has reopened after nearly four months, with new rules in place to help prevent the spread of coronavirus (Covid-19). Walt Disney World’s Magic Kingdom and Animal Kingdom theme parks reopened on Saturday 11 July in Florida, while Epcot and Disney’s Hollywood Studios will follow four days later. The reopening comes despite a huge surge in positive cases of the virus in the state, with 10,000 more infections confirmed on Saturday.

After a period of flattening its curve, Florida has seen deaths surge. ABC News reported that they had 120 deaths on Thursday 9 July, making it higher than previous highest daily death count of 113 in May. Tampa physician Dr Jason Wilson said:

We thought maybe we could keep this thing under wraps. And that worked for a little bit of time… But eventually … it caught up to us.

While deaths have spiked in recent days, statistics show that new cases began spiking in mid-June and active cases from later that same month: 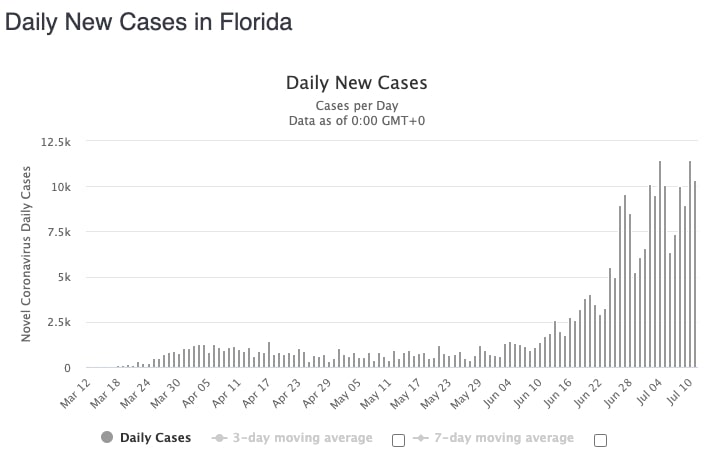 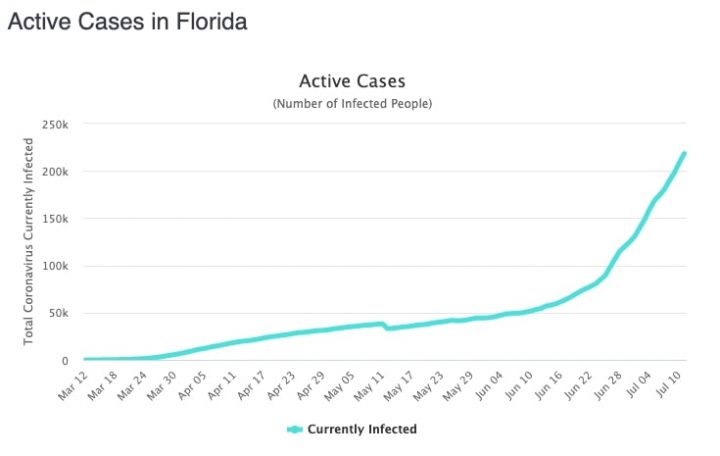 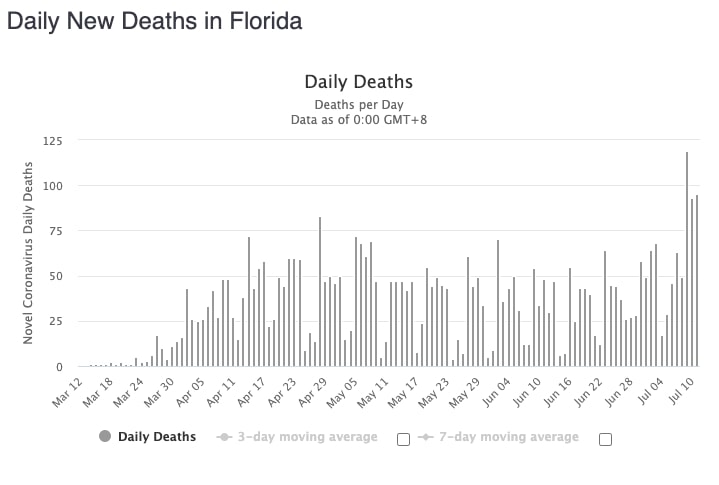 ABC News reported that the rising rates could be down to young people with asymptomatic cases taking less precautions and spreading the virus. It also reported that the surge is reducing hospital capacity, noting that, “even hospitals with some of the biggest ICUs in the state are stretched”.

Many cities and counties have recently reinstated restrictions that had been lifted in May, when cases seemed to drop.

All of Disney’s Orlando parks closed in mid-March in an effort to stop the spread of the virus. Universal Orlando and SeaWorld Orlando closed around the same time but reopened several weeks ago after instituting similar rules to protect employees and customers.

Disney’s new rules include mandatory masks and social distancing. Visitors need to book in advance to enter a park, and they cannot hop between parks. Both visitors and employees will receive temperature checks when they enter, while fireworks shows and parades have been suspended to prevent crowds.

“Excited to be here”

Among those at the park on Saturday was Diane Watkins, a teacher from Helena, Alabama, who visits it about eight times a year. She said:

It’s the chance to come back and be in the magic. Hot or not, mask or not, we’re just happy to be here. I feel like everybody here is in the same frame of mind. Everybody is just so excited to be here.

As we look towards reopening our domestic parks and resorts, the well-being of our guests and cast members remains a top priority. Learn about Disney Parks’ commitment to health and safety measures on the @DisneyParks Blog: https://t.co/pniCSviXOb pic.twitter.com/rgKtBUr1OK

The park is operating at a lower capacity than usual, which Watkins said meant there was only a five-minute wait for the popular Buzz Lightyear ride instead of the usual 90 minutes. Lori Lovell of Evansville, Indiana, strolled around Frontierland on Saturday morning with friends.

I have missed coming here. It just feels really good to be back. This is where I’ve made so many memories. It’s kind of our second home. Not being able to come here was hard.

haven’t even made it in the gate yet and my heart is pounding out of my chest.

just had to squeeze past a lane of opposite traffic while there’s this densely packed line for guest services.

this is unacceptable — and I haven’t even made it into the park yet. pic.twitter.com/GTzsAjRlD2

While this first tweet showed what could have been family groups social distancing, Wisel posted a follow-up video in which she claimed multiple lanes of people had been squeezed into “too tight” a space:

adding video to explain the full issue, which is more than just the above line.

there were also TWO MORE lanes of pedestrian traffic in the SAME walkway.

It’s not a fluke, either – we were directed straight into the bottleneck. (You can hear it in the background.) pic.twitter.com/nhSB3o8gXm

Wisel later linked to a video showing that the other protocols were “working well”:

seeing my tweet being picked up in news stories and want to clarify for non-disney outlets that it does not represent the entire scope of Magic Kingdom today.

some protocols are working well.

others, like what I experienced, were clearly not. https://t.co/b1zGom47tU

Park-goers said nearly everyone appeared to be wearing masks and adhering to social distancing. It’s currently speculated that mask use may be why Japan has experienced such comparatively low death rates. The Institute of Health Metrics and Evaluation predicts that widespread mask use could significantly reduce the number of future deaths. One simulation predicted that 80% mask use could do more to reduce the spread than a lockdown.

Other changes mean visitors cannot hug the costumed Disney characters. Instead, the characters are in motorcades as they make their way through the park.