Hundreds gather in Bristol to say #AllBlackLives matter - The Canary 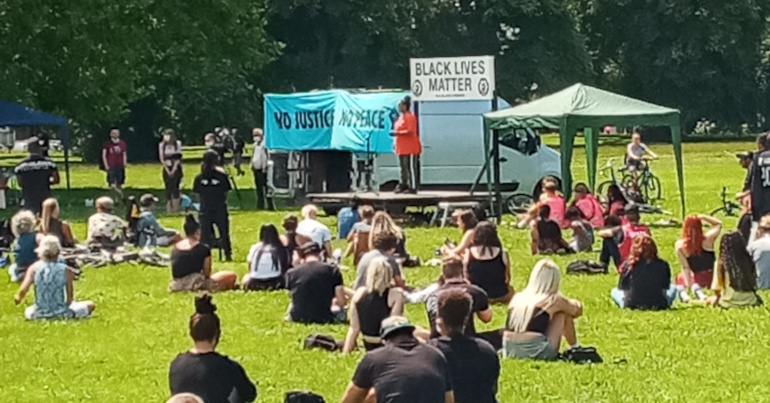 The rally happened just over a month after Black Lives Matter protesters toppled a statue of 17th-century slave trader Edward Colston, and threw it into the River Avon. Since then, lettering has also been removed from outside Bristol’s Colston Hall ahead of a planned name change.

The Bristol Cable tweeted out this video interview with a protest organiser:

Organiser @Zah__a talking about what's happened since the #BlackLivesMatterUK protest last month and what is going to be happening today #ALLBLACKLIVESMATTER#allblacklives pic.twitter.com/EFwBMD05hw

And it also shared a video of a poem read by Bristol poet Lawrence Hoo:

Cleo Lake, another speaker at the event, called on the British state to pay reparations for the slave trade:

But it seems that the UK government is unlikely to listen to this growing movement unless it is forced to. Back in June, home secretary Priti Patel called the protesters’ actions “hooliganism” and reprimanded the Avon and Somerset police chief for not arresting those who toppled Colston’s statue. She was supported in her condemnation by Labour leader Keir Starmer.

Patel also called for a new law against desecrating war memorials, with a maximum punishment of ten years imprisonment. Again, Patel’s plans were supported by Labour.

And government actions have emboldened the far-right, who’ve held gatherings at war memorials, in a racist response to the Black Lives Matter movement.

Following the toppling of Colston’s statue, Bristol police circulated CCTV images of 18 people they wanted to talk to in relation to the protest. One man has been arrested and another six people handed themselves in to the police.

When the images were published, Canary journalist Emily Apple wrote:

It’s… important to remember that just because the police have your photo, it doesn’t mean you’ve necessarily committed any criminal act. But it does mean that if you identify yourself, regardless of whether you’re charged, it’s highly likely you’ll end up on the controversial domestic extremist database and experience the repression and harassment that can come with that label. Domestic extremism is not a legal term and there is no need to have committed an offence, or in fact to be extreme in any way, to end up on the database.

The killing of George Floyd in the US has galvanised people across the world. In the UK, people are rising up against the systemic racism in our own country, and a history of white supremacy that needs to be recognised and taught, not celebrated.

With resistance comes repression. Those who enjoy their privilege and power will do everything they can to repress this wave of rage. We mustn’t let them. We must stand together, show solidarity, and ensure everyone knows their rights.

Bristol Defendant Solidarity has been circulating a flyer in support of the statue topplers. It reads:

Ditching Colston was the best thing that’s happened in ages. Let’s stick together and make them drop the investigation.

The flyer gives advice for anyone who is worried about arrest, and the numbers of trusted solicitors.

Hope that ‘allies… come out feeling like they have learned something’

Meanwhile, the demonstration on 12 July was about learning and building a shared understanding of the oppression faced by Bristol’s people of colour, in order to continue the anti-racist struggle. One speaker at the demonstration interviewed by the Bristol Cable said he hoped:

allies and people who are non-Black come out feeling like they’ve learned something, feel like they’re also a part of something, and that they feel the same way we do.