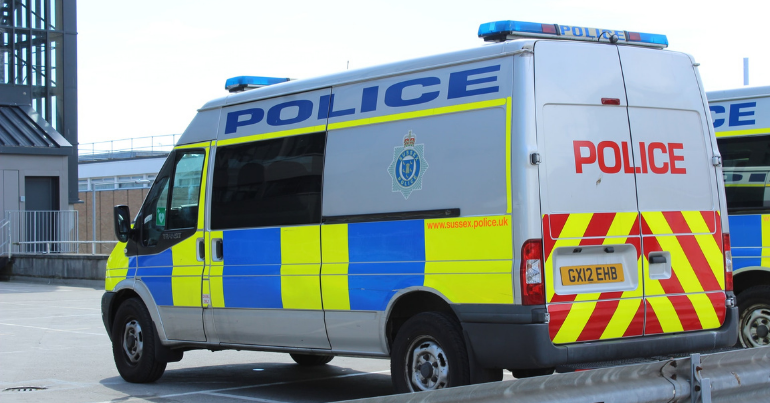 Police officers are being used alongside community mental health teams in NHS services. Former police sergeant Paul Jennings founded a company called the High Intensity Network (HIN) which runs Serenity Integrated Mentoring (SIM). Under the SIM programme, police are used to intervene with highly distressed patients. This is to decrease patients’ use of emergency numbers, accident and emergency departments, or any healthcare in general.

There’s growing concern from a number of groups as to both SIM’s effectiveness and patient vulnerability. As of May 2021, according to the Stop SIM Coalition, 23 out of 52 NHS Trusts in England use SIM.

As part of our #OurLivesOurStories series, we’ll continue to look at the shortcomings of mental health services, as well as increasing NHS privatisation.

SIM was established in 2013, and after a 15 month pilot began to be rolled out in 2016. Since 2018, SIM has run in a number of locations across the UK. Notably, HIN oversaw one such SIM roll-out in South London.

This organisation explains what SIM is by stating:

Section 136 enables the police to move people to a ‘place of safety’. That’s if they present as having some kind of mental distress in public spaces. So-called ‘high intensity service users’ are people who are very unwell. They’re often at high risk of suicide or self-harm and tend to contact emergency services at a ‘high intensity.’

What do the police have to do with it?

A report from the 2018 SIM trial in South London explains the use of police in the programme:

Key to the SIM model are the following staffing requirements:

In this same report, Paul Jennings lays out the rationale behind SIM:

When the right support is not provided, the individual will fail to develop the skills to re-build their lives. They often spiral out of control, increasingly reliant on extreme behaviours to stay noticed or maintain human contact. By this time, even mental health teams run out of ideas and the risk of discharge from the NHS increases significantly. The behaviours encountered by emergency services and the public then become anti-social at best and criminal at worst.

At this point, we have a choice. Give up on them or keep going.

Here, Jennings links expressions of distress or “extreme behaviours” as behaviour which is criminal. This seems to be at the core of why a number of organisations have criticised Jennings and SIM.

The Stop SIM coalition has objected strongly to the use of SIM:

Individuals are not placed under SIM because they have committed a crime. They are extremely vulnerable and frequently at high risk of self-harm and suicide. Despite these high levels of risk, patients under SIM have crisis ‘response plans’ which prevent them from accessing potentially life-saving treatment

Dr Adrian James, president of the Royal College of Psychiatrists, told The Canary:

There’s been growing debate about the use in a number of places across England of ‘Serenity Integrated Monitoring’ with people who have complex mental health needs and have required frequent support from emergency services. Many people in this situation have been let down by a number of different services, including mental health, and they deserve effective and compassionate support.

Concerns have been raised about whether the SIM approach is safe, effective or appropriate. These concerns need to be taken seriously. Any new approach or intervention to support people’s mental health needs to be tested robustly and independently, before it is spread widely. It needs to be evaluated for its safety, effectiveness and acceptability, including with evidence drawn from personal experience. This is especially the case for any approach involving elements of coercion, which can have lasting negative effects.

We are also deeply concerned about the way such approaches could further heighten the stigma around people with complex needs, or re-traumatise them, instead of giving people the compassionate support they need and deserve.

Thank you to everyone who told us about the SIM model that has been rolled out across NHS Trusts, in particular to @StopSIMMH . We're very worried about the model and glad that NHS England is reviewing it. Our statement is below. pic.twitter.com/CTGcXxWltC

Another prominent concern is the involvement of HIN, as a private company, with NHS services.

The 2018 report from South London includes a number of metrics that measure SIM’s relative success. Two particular points stand out:

Indeed, the Academic Health Science Networks, which assisted with SIM during 2018-2020, states on its site that:

The AHSN Network helps mobilise the value that the NHS can add as an economic asset within the UK economy. Through the Innovation Pathway we broker access to a range of expert support and services across the health and care sectors that support NHS innovators and companies to realise the commercial and economic potential of their ideas.

Worryingly, the HIN network lists 3 locations in the USA as using the SIM programme.

Cat Hobbs, director of We Own It, told The Canary:

This is yet another private sector ‘innovation’ that appears to be anything but innovative or effective. It fails to put the needs of patients first and undermines their access to healthcare.

Mental health services – just like all health and social care – should be built around the needs of patients and the expertise of clinicians and health workers. The best way to ensure that is to end the obsession with outsourcing and privatisation that has infected our public services, and to reinstate our NHS as a fully public service.

The Canary reached out to HIN director Paul Jennings and he told us:

SIM is a highly supportive, empowering and life changing model of care that continues to advance our understanding of this complex crisis care problem, for patients who were existing in a largely unsupported space between mental healthcare and the criminal justice system. We have made significant progress in understanding these intensively distressed and traumatised patients, who frequently use services that are ill-prepared to help effectively. Their continued distress often places members of the public at significant risk and so they frequently commit criminal and anti-social offences during their crises.

The involvement of the police, however, is troubling for those who work in mental health services.

RTN vehemently oppose SIM which seeks to impose carceral punishment and surveillance as a means to deter some of the most vulnerable people within our community, named by SIM as “high-intensity users”, from seeking life saving mental and physical health support. This scheme will likely have violent consequences which will disproportionately impact Black, asian and minority ethnic communities, through giving the police further power and patient information which could be used to punish Black and brown individuals, as well as further harm people who exist at the intersection of race, disability and class; specifically immigrants, people living in poverty, sex workers, survivors of abuse and GRC community.

Stephanou raised the issue that the use of Section 136 has itself been deeply problematic for Communities of Colour:

Asian patients are twice as likely, and Black patients four times as likely to be detained under the MHA, plus more likely to be diagnosed with psychosis compared to white patients, however the underlying systemic causes are left unnamed and untreated. SIM feeds the racist, violent stereotypes of conflating “dangerous”, or “high-risk” behaviour with mental illness is a tool of colonialism used to dominate and oppress Black people, rather than offer holistic support.

They made clear the dangers of police involvement in mental health care:

Stephanou went on to add:

SIM will exasperate the very real and legitimate fear that if racialised individuals access mental health support, or report abuse, they are at risk of systemic violence under the guise of care. Police involvement often escalates risk, creating dangerous situations through the use of physical restraint, coercive, unethical forms of treatment, detainment, and higher chances of Black and brown people dying whilst in police custody.

The involvement of police officers with mental health care, and particularly the care of extremely vulnerable patients, is deeply worrying.

The range of issues with SIM is disturbing. Increased NHS privatisation, cruel treatments for vulnerable patients, a lack of community-focused healthcare, and police involvement are just some of these issues. The NHS must listen to the wide variety of groups and individuals who are expressing extreme concern at the SIM programme. Police involvement does not mean safety; it does often mean harm. We need less police involved in mental health services, not more.