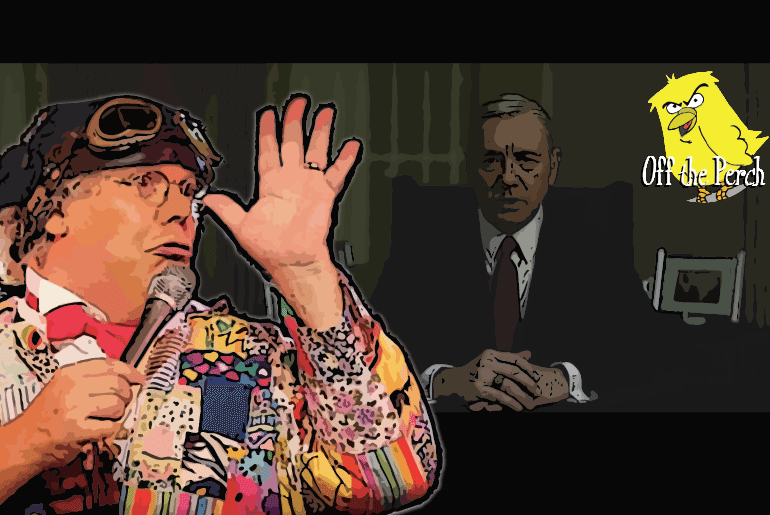 TV shows like The West Wing and House of Cards have long sought to portray a realistic and nuanced vision of American politics. Reality, however, has increasingly left things like realism and nuance behind, which is why the next season of House of Cards is looking to shake things up a bit. Namely by introducing the realistically implausible ‘Donald Chump’.

Britain’s Roy Chubby Brown is set to play the character, who is of course based on Donald Trump. We spoke to the show’s executive producer, David Fincher to find out how he chose the self-styled “fat bastard” for the part:

In recent years, classically trained British thespians like Damian Lewis, Emily Blunt, and Jason Isaacs have been the backbone of American productions – bringing a richness of talent that has cemented this period as a true golden age of story-telling. Actors like that were obviously no use to us here. So it’s just as well you’ve also produced people like Roy Chubby Brown – a performer who possesses the charisma of a haemorrhoid and the talent of a puréed eel.

Fincher explained that portraying the Washington elite as cunning political operators is really doing them a disservice, and that to capture the reality, they needed a big, sweaty blowhard to run into every other scene and shout things like:

HOW MANY MEXICANS DOES IT TAKE TO BUILD A MASSIVE, F*CK-OFF WALL?

ARE YOU ON THE RAG, OR ARE YOU JUST THICK, YOU FAT B*TCH?

A joke too far

Roy Chubby Brown himself claims to be struggling to match the manic, scattershot hatred of Donald Trump, and has had to enrol the help of a professional ‘arsehole coach’ to up his game. Chubby also expressed concerns that it was the hatred-normalising antics of bile-spouting windbags like himself that has led to one of history’s least commendable human beings being taken seriously.

This is what the comic himself had to say on the matter:

I look at Donald Trump, and I think he’s just like me. And then I imagine what the world would look like if someone like me was in charge, and I realise how f*cked that is. Because as much as I’d love to be the President of the world, I know exactly what sort of grubby sh*t I’d be getting up to, and I know that’s exactly what he’ll be doing if he wins.

So real it hurts

We also spoke to Kevin Spacey as he watched Chubby filming a scene in which he threw custard pies at a refugee child and then farted in his face. It was just as Chubby accidentally followed-through that a misty-eyed Spacey turned to us and whispered:

The verisimilitude is haunting.

And in case you don’t know, verisimilitude is a fancy literary term that means having the appearance of truth. It’s not a word you should be able to use when describing a flatulent Roy Chubby Brown playing a potential American President.