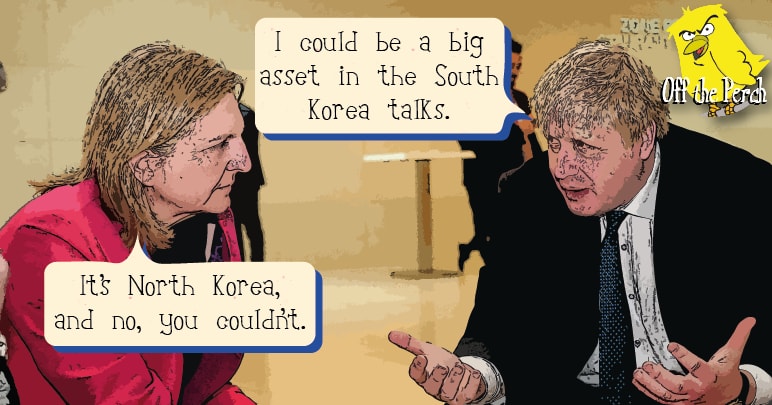 Despite having all the negotiating finesse of a coke-sniffing gorilla, Donald Trump has managed to arrange peace talks with North Korea. It’s too early to tell if it’s down to his tactics; it could be that North Korea thinks it’s become a big enough threat to charge the world protection money.

One thing is certain, though – namely that this circus has enough clowns already. But that isn’t stopping Boris Johnson.

Send in the twat

Boris Johnson is constantly torn between his lust for power and the realisation that he couldn’t run a raffle. But with Theresa May looking like she could be toppled by a distant fart, Johnson is once more having to present himself as leadership material.

The problem is that he doesn’t have any ideas, skills, or talents. And as such, he’s forced to put himself adjacent to important politics in the hope people think he’s involved.

Johnson was found by soldiers in the demilitarised zone between the two Koreas. Apparently, he’s been staking out the potential meeting spot – living in the bushes – surviving on lizards and rainwater.

The foreign secretary planned on running up to Trump and Kim as the talks were happening. His hope was that:

When asked if Johnson was at risk of being shot, a North Korean army captain said:

Unfortunately for the UK, the soldiers resisted the urge, and will be sending him home in the morning.