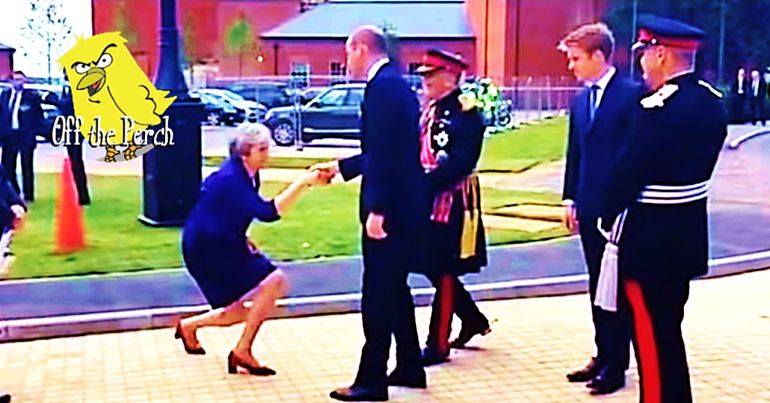 Plans are afoot to remove Theresa May from the office of prime minister and imprison her in the Tower of London. And she’s only got herself to blame. Her curtsey to Prince William on 21 June was judged by royal protocol police to be neither deep nor long enough. Any day now, a ceremonial barge will transport May from Westminster down the Thames to the infamous ‘Traitor’s Gate’ at the Tower. Her punishment after that is uncertain. Kensington Palace hasn’t ruled out execution, but is more likely to impose a sentence of ten years welcoming tourists.

The offence took place at the opening of the new Defence and National Rehabilitation Centre. This facility will look after people wounded when the likes of May put them in harm’s way and the likes of William cheer them on. Because the UK is better at deploying troops than caring for them afterwards, the centre has been funded by tax-efficient generous donations from the hyper-rich.

May’s etiquette advisor, Letitia Febreze, explained the gaffe to Off The Perch:

Theresa got her geometry wrong. It’s hardly surprising. She’s more used to meeting the Queen, who’s literally about a third of the size of William. Also, I think her nerve went a bit. Not only was she facing William, the son of the son of the woman who can fire her, but there were military top brass and – to cap it all – Hugh ‘Babyface’ Grosvenor, who owns all the best bits of London. She spends an hour every day practising supplication, debasement and prostration, but on this occasion it just went wrong. I suppose it shows she’s human. [high-pitched laugh]

May needs to get a grip. She’s the one who runs the country. Ha! Allegedly. What’s she doing acting all stupid for someone who just happens to be from a certain family? Doesn’t make any sense. I thought we got rid of all this sort of bollocks about a hundred years ago. But it seems not. Check out this mad twat festival on Pinterest.

As ever, Ken Chisel from the Institute of Criticism had something useful to add:

May’s contortions before royalty are designed to send a message: ‘This is the established order. Everyone has their place and should know it and act accordingly.’ She hopes that people will treat her like she treats the royals – with a respect that has nothing to do with what she does and everything to do with her job title. It’s pathetic really but she’s happy to act like a serf to the royals in the hope that people will act like serfs to her. Well I’m sorry, but I think the British people are past that.