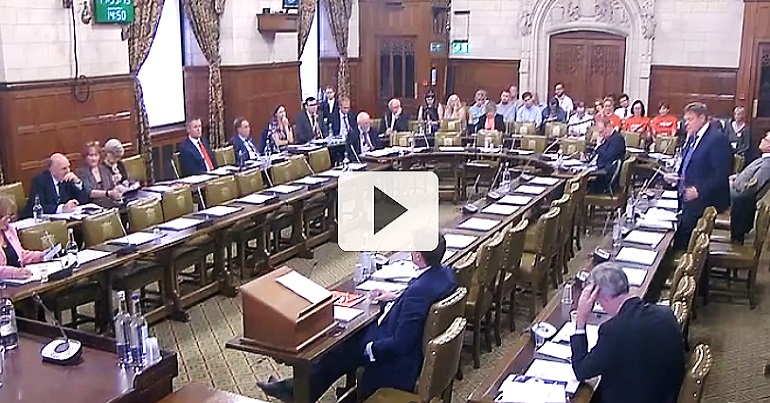 There was a ray of hope shining on Thursday 21 June as some rarely-seen cross political party consensus emerged on a disease that leaves ‘millions missing’.

Myalgic encephalomyelitis/chronic fatigue syndrome, commonly referred to as ME/CFS or just ME is a chronic systemic neuroimmune disease. It affects an estimated 17 million people worldwide and around 250,000 people in the UK. But the disease has been fraught with controversy. Not least because for decades (and often still to this day), the medical profession has not properly recognised it. So campaign groups like #MEAction and the ME Association are trying to raise awareness of the disease.

21 June was a landmark moment for people living with ME. Because a groundbreaking, near three-hour debate took place in parliament. Overarching in its content, the discussion covered many issues. What was unusual about it was the cross-party consensus that was evident. But it was also a masterclass in documenting the reasons why #MEAction has called its campaign about ME the ‘Millions Missing’.

SNP MP Carol Monaghan, who has been pushing the issue of ME in parliament, called the debate. She said in her opening comments that:

ME… costs the UK around £3.3bn per annum. While the exact cause of the disease is unknown, numerous patients report that their ME has developed following a viral infection. ME is characterised by flu-like symptoms which can vary in severity from headaches and muscle aches to debilitating pain, extreme sensitivity to light and sound, and memory and concentration problems. For some, even touch is intolerable and tube feeding is required. Despite the number of people affected and the devastating effect of the disease on sufferers and indeed their families, it is very much a hidden illness. Characterised by some as ‘yuppie flu’ and misunderstood by doctors, the public and politicians alike.

The £3.3bn figure Monaghan mentioned is what’s known as the “economic disease burden” of ME. It is an estimate of how much ME costs the UK economy in terms of spending on healthcare, welfare payments, and also the loss of wages and productivity. The thinktank 2020 Health carried out research [pdf] into this. It found, by analysing the data from other studies, the cost was an estimated £3.3bn every year [pdf, p36]. This is an average estimate, with the true cost possibly ranging from as high as £4.8bn to as low as £1.7bn [pdf, p35].

But while the cost to the economy runs into billions, the money spent on research is paltry in comparison.

Most of the research is self-help. Now that isn’t good enough. This is a major condition that is affecting lots of our constituents, and yet they’re being asked to raise all the money [for research] themselves. That isn’t good enough, so we clearly are asking… the… government… but also the research councils take proper account of giving this the priority it deserves.

He was correct to highlight the fact that research into ME isn’t a priority for government. As The Canary previously reported, since 2012 the government has invested an average of £558,333 each year into ME research and studies. This is just £2.23 per patient, per year.

When you compare this to another illness, the minimal figure is highlighted. Funding per patient, per year between 2007 and 2015 for multiple sclerosis (MS) is, on average, £82.20 versus an economic disease burden of £20,000. For people living with ME, it was £4.40 versus £13,200 respectively. It is deeply unpleasant to have to compare people’s different disabilities like this. But it is important to understand the lack of research into ME.

Even worse, where governments have spent money on research, it has sometimes actually been to the detriment of people living with ME.

During the debate, repeated references were made to the PACE trial. It claims people living with ME can improve, and sometimes recover, by having cognitive behavioural therapy (CBT) and using graded exercise therapy (GET).

The results of the £5m trial, part-funded by the UK Department for Work and Pensions (DWP), were originally published in the Lancet in 2011. But many independent scientists, medical professionals, and disabled people have dismissed them as damaging and ineffective due to multiple, methodological flaws in the trial. The US government has either downgraded or removed the PACE trial findings as recommended treatments. But in the UK, CBT and GET are still the NHS approved treatments for ME.

DUP MP Jim Shannon was scathing about the PACE trial. He said:

The objective results were poor. After a year of therapy, the [GET] group’s increase in walking speed was less than half that achieved in three weeks in a sample of class II chronic heart failure patients receiving [GET]. The trials were suspect [before] we got the information.

After the trial had finished, the PACE authors lowered the threshold they used [as the definition of improvement]. You almost… took the figures and then you manipulated them to get what you wanted… a definition of improvement. This inflated the number of participants classed as recovered or improved… I believe in miracles… but this isn’t one of them. Because people had not recovered.

You can read The Canary‘s full analysis of the PACE trial here. The government confirmed in a written statement on 5 June that it still stands by the PACE trial’s findings.

A medical profession blighted by criticism

The lack of research and the PACE trial has led many people living with ME to be suspicious of the medical profession. They have routinely been disbelieved, stigmatised, given incorrect treatment, or ultimately told it’s ‘all in their heads’. The situation is not improving, either, as Monaghan’s debate bore witness to. As she noted:

There are… moves afoot to categorise ME as a psychological condition. NHS guidelines on medically unexplained symptoms, or MUS, include ME as such a condition. The Royal College of Psychiatrists states: ‘medically unexplained symptoms are persistent bodily complaints for which adequate examination does not reveal sufficient explanatory structural or other specified pathology’…

The Royal College of Psychiatrists go on to say that symptoms are ‘not due to a physical illness in the body. However, they can be explained, but to do this, we need to think about the causes that are not just physical’…

All this, then, presents problems with the Department for Work and Pensions (DWP).

The lack of research, the PACE trial, and negative clinical attitudes culminate in the social security system abandoning people living with ME. This is because the symptoms of people living with ME fluctuate greatly on a day to day basis. Labour’s Mark Tami summed it up by saying:

It is particularly difficult for those… attending assessments for benefits… on a day when the symptoms are not as bad… There is not that acceptance that this is an illness can be very bad, but… not quite as bad on other days… the benefits system needs to look at the longer term picture, rather than just the very short term…

This government’s welfare reforms are causing a lot of heartache and stress for millions of people, including people with ME, many of whom struggle to access welfare benefits. The written evidence… by Action for ME… into [personal independence payments] and the assessments… raised very serious concerns about how the… welfare state treats people with ME.

So where does all this leave people living with ME? It leaves them, as #MEAction says, as part of the Millions Missing. Tragically, it also leaves people to die.

Monaghan told Merryn Crofts’ story during the debate. As the ME Association reported:

Merryn, from Rochdale… became only the second person in the UK to have ME… listed on a death certificate.

Despite being classed as a real neurological disease, many think the condition is not real – even within the medical profession.

Merryn’s mum, Clare Norton, sobbed as she told Rochdale Coroner’s Court how her ‘beautiful’ and ‘energetic’ daughter was left wheelchair-bound and reliant on tube feeding.

The ME Association told The Canary:

ME is real. It’s devastating. It leaves people, at best, struggling to work. At worst, it leaves them enduring a tortuous existence, a living death, where they are unable to take their place in society. It is not before time that this horrendous illness has been debated in parliament.

One in four are so severely affected that they are housebound, bedbound, and in some cases unable to shower, clothe, or feed themselves… People are taking their lives because they cannot bear the torture this illness brings. Others describe themselves as rotting behind closed curtains.

This is a completely unacceptable situation… There is no cure – and the longer it will take to find one unless funding dramatically increases.

Quality of life studies reveal that the level of disability in ME can be just as great than many other serious medical conditions, including cancer and multiple sclerosis.

While some some people with ME do improve over the course of time, it is only a small minority that returns to full normal health. And the disease is indiscriminate, affecting both sexes, all ages and all races.

We are extremely grateful to Carol Monaghan MP for securing the debate. But in truth, the hard work starts now.

Millions missing. They need to be found.

The ME Association is right. While the debate and the cross-party consensus are to be welcomed, this is only the beginning. People living with ME have decades of abuse and neglect to counteract and move past. Parliamentary support is a major step, and while there are still ‘millions missing’ across the world, an agreement that crosses political boundaries is crucial.

– Find out more about the Millions Missing campaign. Also, donate to #MEAction UK Crowdfunder for a UK organiser.